Tragedies shake the nation. The recent deaths of more than 70 children in a Gorakhpur hospital were a shock. So were the diarrhoea and dengue-related deaths in Kerala in June.

Be it Kerala, Uttar Pradesh or any other state, the healthcare system in India is abysmal. According to the UNICEF, 22 per cent of the 11 million global deaths take place in India and most child deaths are attributed to just six largely preventable causes - pneumonia, diarrhoea, malaria, neonatal pneumonia, pre-term delivery and asphyxia. Most of these diseases spread like an epidemic in different parts of the country with the onset of the monsoon.

Health ministry figures state that 13 children under the age of five succumb to diarrhoea every hour in India. It means the quality of drinking water is poor.

Politics over health and blame game are not the answer to such crises. Ironically, India’s health system is poor despite the nation having one of the largest networks of district hospitals. Funds alone are not the solution.

According to government norms, urban areas are supposed to have a two-tier system with urban health centres for every one lakh population, followed by general hospital, community healthcare centres and primary healthcare centres.

The ministry of health and official figures of 2012 state that there were 1.48 lakh sub-centres at the gram panchayat level. At that, the shortfall was 35,762. It looks good but most of these are at best semi-functional with inadequate number of doctors.

Even in places where the infrastructure is in place, there is a shortfall of trained doctors and support staff and even the hospitals of AIIMS unfortunately suffer from the problem.

Little data is available in India on hospital-affected infections (HAI) as hospitals are not mandated to report incidences.

However, according to a 2014 study, the World Health Organization found figures from India “alarming, with an incidence rate varying from 11 to 83 per cent for different kinds of HAI”.

A study from 2011 to 2012 at the JP Narayan Apex Trauma Centre at the All-India Institute of Medical Sciences in New Delhi showed an infection rate of 10.6 per cent. Of those infected, 83 died - implying a mortality rate of 34.5 per cent.

So Gorakhpur and Kerala are not the aberrations. What the two recent tragedies do is to highlight the grave problem of healthcare and question why the country has not been able to have a humane, empathetic and effective system.

One reason for the general apathy is that government facilities are availed of by those who cannot afford treatment at private facilities. The country talks of the poor but they mostly remain marginalised.

In this month’s incident, it has come to the fore that children died at the hospital because of stoppage of oxygen supply over non-payment of dues. The Gorakhpur district magistrate’s report says such emergency supplies should not have been stopped. 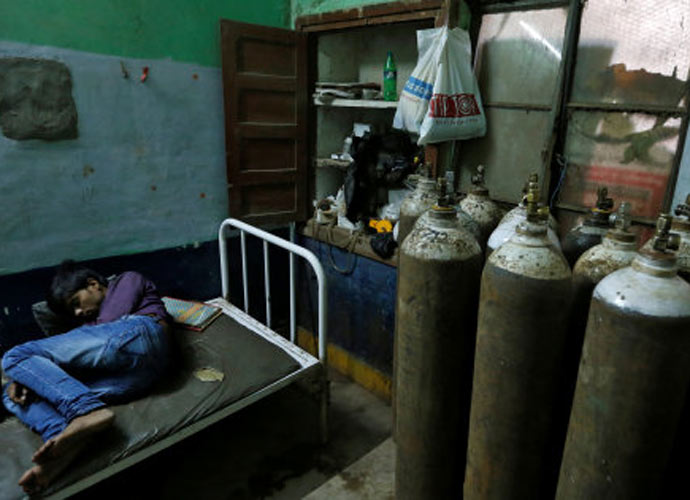 Instances of indifference are rapidly becoming the norm. Photo: Reuters

According to the hospital’s records - reported by newspapers including Mint - most children who died were not suffering from encephalitis. So that indicates graver mismanagement.

A former secretary at the ministry of health and family welfare, K Sujatha Rao, who spent close to 20 years in the health sector, has recently written that systems recognise that when people are sick, they are equally vulnerable, regardless of means, age, or gender.

Such a system would foster patient-centred health delivery and a culture of values such as honesty, integrity, and the pursuit of knowledge. As a society, we do not seem to give these issues much importance.

But then it hurts when one reads about the poor tribal Manjhi carrying the body of his wife on his frail shoulders as he could not afford an ambulance, or when a ten-day-old infant dies of rat bites at Guntur Medical College ICU.

What is disturbing is that such instances of indifference are rapidly becoming the norm. Such disregard for human life is a strong indictment of us as a people, as much as it is of the government.

Are private hospitals better? They are often not. It is also known that the bigger the brand name, the more it is likely to fleece the patient through various means and unnecessary tests, CT scans and MRIs.

A one-night emergency stay for a simple ailment costs a minimum of around Rs 10,000 in such hospitals. This in a country where over 98 per cent of people get measly wages of less than Rs 10,000 a month.

Australian medical practitioner Dr David Berger, who volunteered as a physician at a charitable hospital in the Himalayas in June 2014, pointed out the lack of will to reform the evil practices in the Indian healthcare system.

Writing for the British Medical Journal, Dr Berger talked about “how kickbacks and bribes lubricate every part of the healthcare machinery”.

His article drew attention to the “unvirtuous circle” of donations and fees in private institutions generating a debt burden, making doctors more open to corruption (an allegation that is being rampantly made in the case of officials at BRD Hospital in Gorakhpur).

He also exposed the practice of unscrupulous doctors prescribing unnecessary drugs and specific brands at the pecuniary urging of pharmaceutical companies and ordering irrelevant tests. These two are known evils, Dr Berger said.

In reality, the malaise begins with the admissions to medical colleges. In Madhya Pradesh, the Vyapam scam is well-known. In private medical colleges, degrees are virtually up for sale, it has been repeatedly alleged. The price varies from Rs 30 lakh for MBBS to over Rs 1 crore for post-graduate degrees.

If healthcare is run with the highest commercial interests, could what has happened in Gorakhpur, Kerala or elsewhere be ever prevented? If this remains the sine qua non, improvements despite government efforts would be difficult.

Sujatha Rao says funds alone are not the solution. It requires organisational structures to be put in place.

This shows that the system can function. Healthcare has to be treated as a national emergency and the government must hold a national dialogue for a pan-India system.

The nation needs to understand what ails us because that alone would provide the opportunity to go forward.