Can medicine or government policies find a cure to the diabetes epidemic?

When we last did a cover story on diabetes in 2003, India had 33 million diabetics, more than the population of Canada. Fifteen years later, this figure has climbed to 82 million, equal to Germany, the world's 17th most populated country. India houses the world's second largest population of diabetics after China. From a lifestyle disease, diabetes has turned into a violent virulent epidemic, figuring in the prime minister's speeches and the government's health action plans.

Our cover story 'Death by Sugar' examines the havoc wrought by this disease in recent years and detects some alarming new trends. One of them is that diabetes can be aggravated by air pollution. A new study on 1.7 million individuals published in The Lancet Planetary Health this July shows how inflammation from lethal air particles puts severe pressure on the pancreas, leading to diabetes.

New research shows that ultra-fine pollutants classed by PM2.5 can breach the protective barrier of blood vessels, triggering inflammation and greater risk of heart events, lung disease and cancer. Pollutants interfere with the body's ability to process sugar. This is a double whammy because India is now home to 14 of the world's 20 most polluted cities.

Diabetes is also being aggravated by another silent killer — obesity. About 20 per cent of Indian adults are overweight, up from just 9 per cent in 1990. About 38 in every 100 overweight Indian adults have diabetes, compared to just 19 globally. The more fatty tissue you have, the more resistant your cells are to insulin.

China might have overtaken India as the world's diabetes capital in 2014, but this is no consolation. The prevalence rate of diabetes in Indian adults above age 20 jumped 39 per cent between 1990 and 2016.

There has been an 80 per cent rise in years of healthy life lost to premature death or disability due to diabetes during this period, the highest among non-communicable, chronic, lifestyle diseases in India, along with a 131 per cent rise in death rate. A new study between 1990 and 2016 has detected a potentially explosive increase of diabetes — in every Indian state. 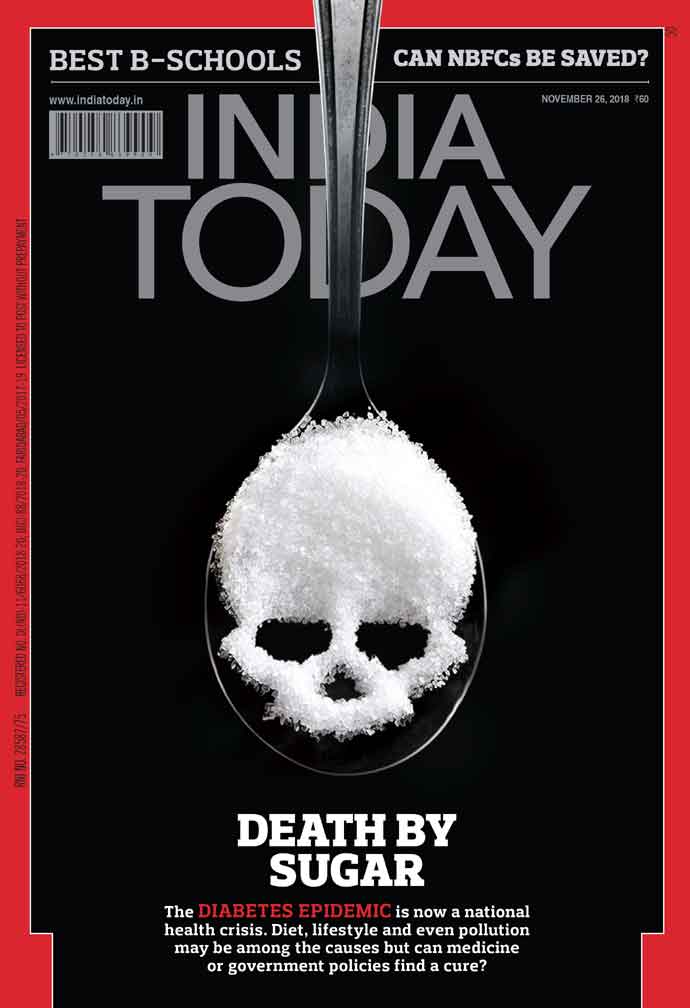 What was earlier seen as a rich man's disease has now engulfed social barriers. It's not hard to see why. Post-liberalisation India has seen rapid urbanisation, greater disposable incomes, increasingly sedentary lifestyles and easy access to cheap junk foods laced with sugar. Tonnes of it. India is the world's sugar capital. Last year, Indians consumed 26.5 million tonnes of the white stuff, more than twice what the US consumed.

The implications of a large diabetic population are grim — it means increased healthcare spending and a less productive population. Research has established a 36 per cent jump in years lost to diabetes due to excess weight in India. Statistically, Indians are at a higher risk from diabetes — in 2016, the incidence in India is about twice the global average.

Executive Editor Damayanti Datta, who has tracked the steady march of this disease in our pages over the past decade and spoke to a cross-section of experts, says she finds the link between the deadly PM 2.5 air pollutants and diabetes especially frightening. "India is second in the world in obesity and diabetes and tops the charts in pollution. Can that be just a coincidence?" she asks. "Is that why everybody's getting it — young, old, men, women, rich, poor and neonates?"

These are questions we must ponder over. While a cure for diabetes still eludes researchers, the disease can be mitigated through a healthy lifestyle, eating the right food, and plenty of exercise. More importantly, it calls for intervention from the state to detect its onset. A diabetes mukt Bharat? That's a public health goal worth pursuing.

Post your comment
#Pollution, #Lifestyle disease, #Health, #Diabetes
The views and opinions expressed in this article are those of the authors and do not necessarily reflect the official policy or position of DailyO.in or the India Today Group. The writers are solely responsible for any claims arising out of the contents of this article.