What GST — the tax nightmare — tells you about BJP's politics

The party's core vote bank of traders is no longer euphoric.

What does GST tell you about the politics of the Bharatiya Janata Party (BJP)? That electoral victories do not guarantee an everlasting connect with ground realities. The statement may sound paradoxical, but when it comes to politics, GST reveals how a highly popular political party's "reform" is distant from the experiences of its own long-established constituency of traders and small businesses.

It was not just technology or economics that botched up GST, but also BJP's own failure to connect with the nature and needs of India's gigantic domestic trade sector when it got on to designing the mega tax reform.

Among the league of reforms that India initiated since 1991, GST can rightly be called the most peculiar one until now. Unlike the earlier reforms that targeted organised businesses, GST was the first which aimed at India's burgeoning informal and unorganised sector.

Unorganised players contribute around 50 per cent to India’s GDP and account for a massive 90 per cent of employment opportunities.

Politically speaking, GST was targeted towards BJP's strongest constituency of small businesses and traders as big corporates were already tax-compliant. The unorganised players had all the reasons to be optimistic as India's reform trajectory of last two decades had not helped much in terms of easing their business lives.

The sixth economic census (2016) found that 78.2 per cent of India's non-agricultural enterprises were self-financed, that is, not dependent on bank credit. The reduction in tax rates and lower compliance cost without corruption matters a lot for the survival of informal sector and profitability amid ever-rising costs of power, fuel and real estate.

On the political front, the expectations of small traders from the GST mounted since mid-2015, when the Centre started building political consensus on the tax reform. It is at this stage that the BJP government should have launched consultations with the stakeholders to comprehend their needs and, in turn, sensitise the latter to the new process. 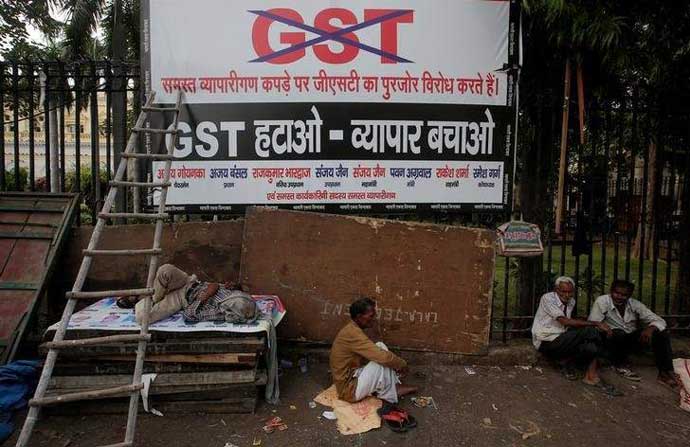 Traders and small businesses were the biggest victims of the reckless note ban. And then, the GST. Photo: Reuters

Even as the ruling government, in its overconfidence, avoided a nationwide consultation, traders were convinced that their own BJP — which possesses the best knowledge of India's small and micro economy — would gift them the GST of their dreams.

BJP's vote base remained euphoric until the release of Model GST Bill in August 2016 for reactions and suggestions. Loaded with draconian compliance rules, including cumbersome registration and returns provisos, the first piece of GST legislation sent chills down the spines of BJP's trader vote bank. Against the hopes of a modern, simple and far-sighted tax system, the model law had set the course for a potential tax nightmare.

Traders and small businesses were the biggest victims of the reckless note ban.

The grand victory in Uttar Pradesh turned out to be the pinnacle of BJP leaders’ hubris — it eventually disconnected them from the ground reality of how severely the note ban hit the informal sector. Right after the UP verdict, the government moved hastily towards cobbling together a multiple tax (four slabs + cess) structure that ruined the remaining hopes of a small business-friendly tax system.

After the note ban, the BJP's vote base did raise the alarm. However, driven by the narrative that small is an incentive to tax thievery, the government went ahead with the implementation of GST, with scant preparation and bizarre flaws.

And cut to October 2017, as GST staged a rollback, BJP circles are abuzz with anecdotes of top leaders snootily ignoring the complaints of traders and even forcing them to withdraw their representations before the government.

After the high-voltage midnight launch of GST, the BJP unleashed its army of Cabinet ministers and office bearers in various states to spread the GST "revolution" among its vote base.

However, in the wake of rising protest, the post-GST political campaigns only forced the government to make a quick retreat ahead of forthcoming Assembly elections in various states, Gujarat.

Whatever might be the electoral verdict in these states, GST has already staged a post truth phenomenon inside the BJP. The "reform" not only turned out to be contrary to the expectations of high growth, ease of doing business and lower prices, but also shook BJP's political foundation among its core vote bank.

Beyond the economic debacle, GST will be recorded in history as the one-of-a-kind example of how political successes yielded a reform that shattered more than what it promised to deliver.

Also read: How Indian economy can recover from the disaster of demonetisation and GST

Post your comment
#Goods and services tax, #BJP, #GST
The views and opinions expressed in this article are those of the authors and do not necessarily reflect the official policy or position of DailyO.in or the India Today Group. The writers are solely responsible for any claims arising out of the contents of this article.