The last three Assembly elections in Gujarat, the shrill rhetoric notwithstanding, have been virtually a no contest for the BJP.

Prior to the announcement for next month's elections, most pollsters predicted a runaway win for the BJP. But the ground situation in the state has undergone a remarkable change and the BJP now realises it has a big fight on its hands.

There are several reasons for this - over two decades of uninterrupted BJP rule, the absence of Narendra Modi as the CM candidate this time, the emergence of Hardik Patel, Alpesh Thakor and Jignesh Mevani are all playing a part. However, the hugely unpopular GST, especially among small businessmen and traders, demonetisation, and the failure to create a major "polarisation" so far has the potential of derailing the BJP.

The Modi factor continues to loom large. He is a source of great pride for most Gujaratis. His charisma and soaring rhetoric, besides the skillful exploitation of "Gujarati asmita" and his track record as CM helped the BJP demolish the Congress in the state in election after election. 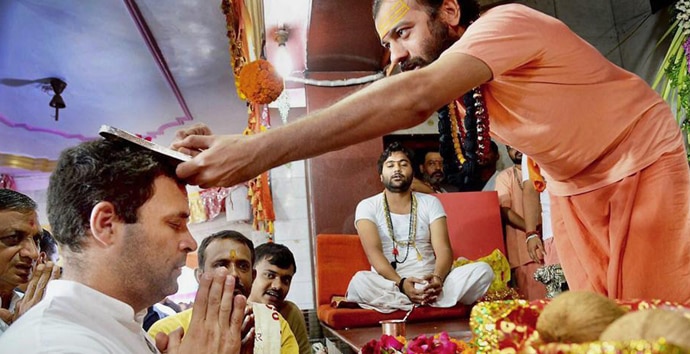 However, this time around, he is not the chief ministerial candidate and his successor lacks both the charisma and the stature of Modi, thereby negating the huge advantage that the BJP enjoyed in the previous elections.

And above all, it's the emergence of Hardik Patel, Alpesh Thakor and Jignesh Mevani each representing a different social segment that threatens to queer the pitch for the BJP's carefully crafted vote bank.

The Patels led by Hardik Patel account for about 16 per cent of the state's population, Alpesh Thakor-led OBCs form about 40 per cent and the Dalits, led by Mevani, make up 7 per cent of the population. Together the three can have a huge bearing on the Gujarat elections this time.

Two more significant changes difficult to ignore in this election are the emergence of the caste factor at the expense of Hindutva and the absence of any discernible polarisation on religious lines, so far.

Make no mistake, polarisation coupled with Modi's charisma and governance helped the BJP romp home in the past two decades. Their absence from the political discourse up until now could have a significant bearing on the outcome of the December 18 polls.

Significantly, the minorities have been conspicuous by their silence. And their absence, either by accident or design, from the front lines of forces that ranged against Modi has so far helped prevent any kind of polarisation from taking place so far.

The Congress too has changed its tack and has refrained from openly courting the community.

The party has consciously avoided making it into a communal versus secular battle.

In addition to leaning heavily on to the three youth leaders , the party has sought to tap into the discontent against GST and demonetisation, besides dissatisfaction with the "Gujarat model" of development.

The BJP realises it has a fight on its hands in Gujarat. Party chief Amit Shah hasn't stepped out of the state for weeks and is working overtime to rev up his party's election machinery in the state.

Central ministers Smriti Irani and Nirmala Sitharaman are campaigning door0-to-door and a phalanx of senior party functionaries and ministers are expected to hit the campaign trail from the end of the month.

The BJP's trump card though remains Narendra Modi. He is expected to embark on a high-voltage campaign from the first week of December, and the party is banking on his emotive appeal and the special place that he enjoys in the hearts of Gujaratis to help ward off the fiercest challenge to its stranglehold over the state.

Gujarat 2017 is a far more closely contested election than any election since 2002. However, if the BJP manages to hold on to Gujarat, it will tout that as an endorsement of its decisions like the GST, which will also help silence critics both within and outside the party.

It will help the party puncture the momentum that the Opposition, particularly Rahul Gandhi, has begun to generate lately.

However, if the Congress were to pull it off in Gujarat, it will breathe a fresh life into the party and come as a huge shot in the arm for Rahul Gandhi ahead of his elevation as the Congress president.

It could also act as a catalyst for a grand opposition alliance against the BJP in 2019.