A victory, or defeat, is part of an electoral process and brings with it its own set of challenges which parties take in their stride. But Gujarat is an altogether different story, both for the ruling BJP and the opposition Congress.

The state, ruled by the BJP for 22 years now, has been the original Hindutva lab for the party providing it with the role model and the template to replicate it in states it has won, is working at capturing, or trying to establish its presence in.

Until recently, the BJP expected a cakewalk in the forthcoming December 2017 Assembly polls. But the contest has tightened of late as the party grapples with the negatives of demonetisation, GST, incumbency and an election in which caste is a factor and Narendra Modi is no longer the CM candidate. Add to this, a resurgent Congress drawing strength from the anti-BJP campaigns of Gujarat’s three new musketeers: Hardik Patel, Alpesh Thakor and Jignesh Mevani, leaders of Patidar Patels, OBCs and Dalits respectively.

The Hindutva citadel the BJP and RSS prided themselves on appears to be under attack. But the ruling party is confident of quashing this challenge and returning to power. And it is going all out to ensure this. 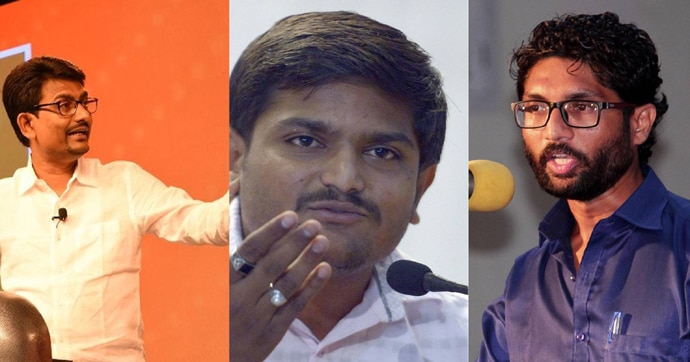 This is a scenario the BJP dreads.

Even if it dubs such a loss as an electoral aberration, as it did when it lost Delhi to the AAP, it is aware that, unlike any other state, its ouster from Gujarat would be a crushing blow and spell danger on at least six major counts.

One, it will dent the perception of Modi’s invincibility, his claimed synonymity with Gujarat and the sentimental response of voters that one leader from their state is now the prime minister and another is the BJP chief who should be backed.

Two, ahead of the Gujarat polls, the Centre began to tweak the GST to mollify the trading community, which has been its supporters for decades. A defeat would ring the alarm for the future and compel the Modi government to recast its economic reforms agenda and make it more amendable to the people.

Three, and this would particularly worry the BJP-RSS, it would mean that the BJP’s strategy of countering the post-Mandal caste-based politics with an overarching Hindutva would not work if the segmented caste groups got together. This had happened in Bihar in 2015 when the JD(U)-RJD-Congress combine with their kurmi-Yadav-Muslim-section-of-upper caste vote bank defeated the BJP.

Should this happen in Gujarat where Patel, Thakor and Mevani are directly or indirectly backing the Congress, the BJP could be in trouble. The new regime would dismantle the Hindutva lab and edifice set up by the BJP in west India with a heady mix of Hindutva and development, which its critics saw as lopsided, exclusivist and discriminatory.

Four, the demolition of the Hindutva lab that the BJP had showcased for the rest of the country and the world could perhaps induce the BJP to re-examine its moves to establish similar hubs in the east and the Northeast, the north and the south. These include BJP-ruled Assam and other eastern and northeastern states, Tamil Nadu, Karnataka and Kerala in the south and J&K in the north where it is in a coalition with Mehbooba Mufti’s PDP.

In some of these regions, the BJP is pushing for a development-Hindutva model to establish and consolidate its hold. In Assam, this is being built around the theme of immigration in which Hindus coming from Bangladesh and other countries are dubbed refugees while the Muslims are branded infiltrators who need to be acted against.

Down south in Kerala, this involves a faceoff with the CPI-M over the reported killing of RSS activists. During their Jan Raksha Yatra, Amit Shah and UP chief minister Yogi Adityanath bracketed the Left with jihad terror to allege that anti-nationals are encouraging Maoists and Muslim fundamentalists. In doing so, the BJP hopes to create space for itself and its ideology while also breaking the decades-old bipolar politics that oscillates between the Congress-led UDF and the CPM-led LDF.

In Karnataka, the saffron party had a five-year stint in 2008 and prior to that was a junior partner in the JD(S)-led HD Kumaraswamy government. It now hopes to oust the ruling Congress in the 2018 polls. If it wins the state, the outcome in Gujarat would influence its working in Bangalore.

In J&K, the BJP’s is using its coalition with the ideologically opposite PDP to consolidate its hold on the plains and decimate the Congress as an alternative so that after the 2021 state polls, the two dominant regional parties - the ruling PDP and the opposition NC - are forced to play second fiddle to it. The BJP presently has 25 of the 37 seats of the Jammu region out of a total of 87 seats in the Assembly.

Its coalition with Mehbooba Mufti’s PDP since 2016 has been marked by differences on issues like how to deal with stone-pelters in the Valley, abrogation of Article 35A (which empowers the state legislature to define "permanent residents" and bars outsiders from acquiring immovable property or getting government jobs) and talks with the Hurriyat or other stakeholders. At the same time, its own supporters complain that the BJP is not acting fast enough.

Five, a defeat in Gujarat could prompt potential partners, who may read in it a sign of the saffron party’s decline, to rethink about aligning with the BJP for the 2019 General Elections. The BJP has been trying to rope in allies in politically fluid states like Tamil Nadu where its organisation and support are weak.

Modi has been cultivating the faction-ridden AIADMK, which is virtually adrift after J Jayalalithaa’s death in December 2016, visiting the ailing opposition DMK leader M Karunanidhi and trying to reach out to superstars like Rajinikanth.

Six, and this would perhaps count among the deepest cut, its defeat could spell the Congress’s revival after the BJP and Modi’s vow to create a "Congress-mukt" Bharat. They seemed to move towards that goal when the 132-year-old party drew a blank in 19 states and union territories and won just 44 Lok Sabha seats in 2014, and lost a series of state elections before and after that including in Rajasthan, Chhattisgarh, Madhya Pradesh, Maharashtra, Haryana, Jharkhand, Andhra Pradesh, Assam, Delhi, Goa, Uttar Pradesh and Uttarakhand.

Elsewhere, Sonia Gandhi’s party lost to the BJD in Odisha, the TRS in Telangana and the Aam Aadmi Party in Delhi. The only thin sliver of hope for it came in 2015 in Bihar where it piggybacked on the JD(U)-RJD combine until chief minister Nitish Kumar renewed his ties with the BJP earlier this year. Post-2014, the Congress’s only big victory came in Punjab in 2017.

Gujarat, in the circumstances, will be a defining moment for either party.

A BJP victory - no matter how slender - would further demoralise the Congress, enhance Modi’s stature, boost the Centre’s reforms agenda and strengthen the BJP’s Hindutva both in Gujarat and in states like Yogi Adityanath’s Uttar Pradesh, Manohar Lal Khattar’s Haryana or Trivendra Singh Rawat's Uttarakhand where the governments have been weaving the Sangh ideology into governance and government policies.

A victory in Gujarat will impart greater impetus to the party for the 2018 Assembly polls, the 2019 Lok Sabha elections and the Congress-mukt campaign while prompting fence sitters to jump onto the BJP bandwagon.

Also read: Why Modi and Amit Shah can no longer take BJP victory in Gujarat for granted