The Congress president-to-be has had a makeover and Gujarat has been his first outing in the new avatar.

As a journalist covering Gujarat and Narendra Modi's stint as the chief minister, I had written several times that "you may love him or hate him, but you certainly cannot ignore him". I had then never thought I’d write this again for another politician, and that too, Rahul Gandhi.

The Congress president-to-be, Rahul Gandhi, is actually the one to set the agenda on which the Assembly elections are being fought in Gujarat. And for this you need not examine his campaign rallies very closely, but understand the nuances of Modi’s ongoing campaign for the past 10 days in the state.

For starters, the claim that Modi is campaigning "too much" in Gujarat is incorrect. The rallies are not over yet, but by December 12, when the final tally of his rallies will be out, we will realise it may have felt like it was a lot, but it wasn’t statistically more than previous polls in other states of similar size. Mind you, thinking of us journalists, the BJP strategists do take care of such trivia. 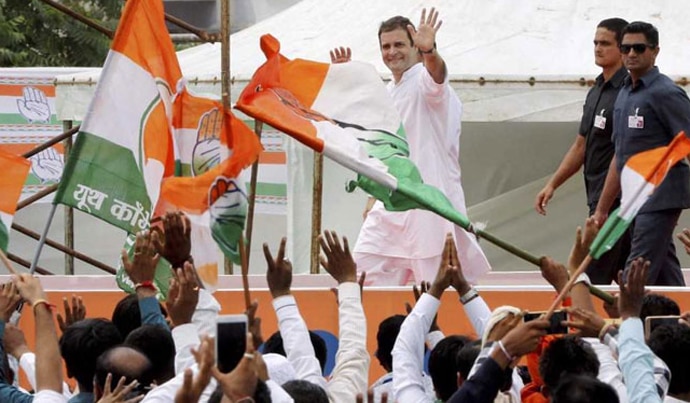 So just a couple of days to go now, we know for sure the battle is only between Modi and Rahul who are the respective faces of their parties. Rahul took an early lead, uncanny we all thought, for a "reluctant politician". In the past, be it Sonia Gandhi or Rahul, they are known to campaign briefly and leave in their wake a flurry of expectations among Congress workers, but never return to take them to a logical conclusion.

But this time around, Rahul started a good month before the prime minister got into poll mode with a four phase three-day Navsarjan Yatra starting with Saurashtra, central Gujarat, south and lastly north. After that, he also returned for a day in Surat and then two days in coastal Saurashtra.

The most striking feature of these visits have, of course, been his temple-runs, or 'soft Hindutva" as the strategy came to be called by his opponents. Typically at this juncture, the Congress would recede into its "secular image", but this time RG, as Rahul is popularly called in political circles, persisted. He never made a fuss about it in public, but his team calmly weathered BJP allegations questioning Rahul’s "bhaav" and "aastha" (it's difficult to find the exact translation for these words, but can be loosely interpreted as faith). In fact, the Congress enjoyed and welcomed it. They wanted this to get into the national discourse. I was a witness to it, I tell you. And they did manage to get it into the discourse. And how!

All that the BJP leaders - from top to bottom - were whining about was how RG was stealing their temple thunder. It was the Congress’s masterstroke. Because what was tough was to get RG to agree to it. Not one to wear his religion on his sleeve, he has by now visited some 23 temples in around 15 days that he has spent campaigning in Gujarat.

The Congress, especially in Gujarat, needed to distance itself from the Muslim-sympathiser image to gain confidence of the majority communities. And this had to be done without polarising voters.

Except Modi, almost every senior leader of the BJP has commented on this, giving it the status of a poll issue. In the past week, social media has even seen posters asking people to vote for the real Hindutva party, not "secular fakes". No prizes for guessing who’s circulating them.

Next up are the real issues Rahul spoke about in his rallies - unemployment, farmers’ distress, Modi’s pro-rich policies as he invoked the land and loan worth Rs 32,000 crore given to Tata for the Nano plant in Sanand. Also, the Gabbar Singh Tax (GST) comment made in jest, took off like a jet.

Modi has countered each of Rahul's allegations very carefully, point by point. He has spoken in Gujarati in every rally. No, he doesn’t necessarily do that. This time, he spoke in Gujarat to give the message that he is their man, he belongs to this land. In each of his speeches, and I have had the kind fortune of listening in to almost all of them, he has invoked some local flavour and associated himself with it. Like in Morbi, he made the claim that he was a part of the RSS team that was carrying out rescue operations after Machhu dam collapse in August 1979. In Dhandhuka, he said I used to travel in a train to come here just to read a book and have a local food preparation called "Olo". He has said it in as many words that your man is sitting in Delhi and he will work for you.

RG is the face of Gujarat Congress, but he is not a "local" leader. Modi has gone into great detailing to underline this inherent score.

Modi has never responded to specific allegations, but he has responded to every perception that RG’s campaign created about him. Coming out of a messed-up PR campaign over his million-rupee monogrammed suit, Modi had some ground to cover for the pro-rich image.

He started off with making hay of the Congress’s "chaiwala" faux pas, insinuating "look I am the poor man here and the Congress is making fun of that". His said: "Yes, I sold tea, but I did not sell the nation."

After that in every single rally, he has emphatically called himself a messiah of the poor. In each region, he has highlighted specific projects or decisions of his state government that have generated employment for local youth.

Responding to Hardik Patel’s clarion call and RG’s active outreach to Patidars, Modi countered by reminding that all four Patidar CMs of Gujarat - Babu Jashbhai Patel, Chimanbhai Patel, Keshubhai Patel and Anandiben Patel - were meted out injustice by the Congress, and were supported by the BJP. (This is not factually correct, but I’ll leave it for another day).

Rahul Gandhi has had a makeover and Gujarat has been his first outing in the new avatar. And it is an avatar that the BJP appears rattled about. Rahul "baba" and "Pappu" are adjectives of the past. Now it’s "Aurangzeb" - a controversial historical character indeed, but a ruler no less.

Whether this new avatar will sustain and whether it will be enough to drive the Congress into the seat of power in Gujarat remains to be seen. Whatever be the outcome, this election will go down in history as one where RG gave the BJP a real tough fight.

#Modi, #Rahul Gandhi, #Gujarat Assembly elections
The views and opinions expressed in this article are those of the authors and do not necessarily reflect the official policy or position of DailyO.in or the India Today Group. The writers are solely responsible for any claims arising out of the contents of this article.