Development won't cut it: Why BJP may end up fielding Vanzara in Gujarat

It will be part of the back-to-communal-basics tactic adopted by BJP president Amit Shah.

Dahyabhai Gobarji Vanzara, the former deputy inspector-general of police in Gujarat, who was jailed from 2007 to 2015 for allegedly having carried out a series of extra-judicial killings during the tenure of Narendra Modi as chief minister, has confirmed that he is in talks with the BJP to contest the Gujarat Assembly elections to be held next month.

Fielding Vanzara to polarise the contest will be part of the back-to-communal-basics tactic adopted by BJP president Amit Shah, who is under pressure to deliver on his claim of "mission 150-plus as a thanksgiving to Modi" from the state.

Both Shah and Modi are under pressure to deliver spectacular results from Gujarat, their home state, which the BJP has now ruled for 20 years. 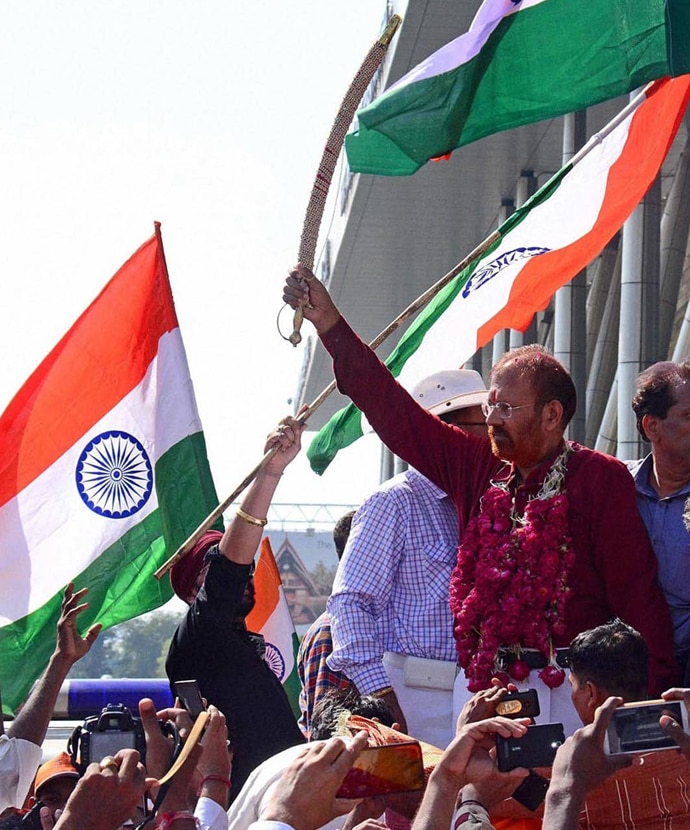 Facing anti-incumbency and infighting within the party to contain the damage caused by three community leaders - Hardik Patel, who led the Patidar agitation in Gujarat; Alpesh Thakor, a prominent OBC leader in the state who has recently joined the Congress; and Jignesh Mevani, who is leading the charge against Dalit atrocities in the state - Shah has gone back to the communal playbook.

Posters have come up all over Gujarat talking about "mian Ahmed's ISIS links".

Patel has filed a defamation case and written to Union home minister Rajnath Singh against the BJP's allegations.

My letter to the Union Home Minister pic.twitter.com/KSXDU8UB4X

A senior Congress leader said, "This is politics at its nadir. Patel gave Shah a bloody nose when, despite all BJP shenanigans, the veteran Congress leader defeated the BJP nominee in a bitterly fought Rajya Sabha election in Gujarat. Shah has a personal grudge against him and this is a payback for the Rajya Sabha poll win."

The normally reticent and media shy Patel in an earlier interview to me, his first on the issue, had said, "Both Modi and Shah seem to have a personal problem with me. I don't know the reason for it."

Literally clutching at communal straws, Modi sought to make a huge issue out of former Union minister P Chidambaram's statement recently. In an interview to me he said: "Kashmir needed autonomy and the government was making a mess of the situation."

Modi and the entire BJP claimed that Chidambaram was batting for "azadi" (freedom). An irate Chidambaram, who was noticeably not supported by the Congress party, said: "The PM was imagining a ghost and attacking it."

Clearly the much-vaunted Gujarat model and the famed Modi era "vikas" (development) have proved dud since the PM, who has made a record number of more than 15 campaign trips before the delayed model code of conduct came into force in Gujarat, hardly refer to them anymore.

Instead, Modi announced a slew of mega-goodies for Gujarat even as finance minister Arun Jaitley held a press conference where he specially mentioned that GST on khakhra (Gujarati savoury snack) man-made yarn and namkeen has been brought down to five per cent.

The BJP is visibly nervous as it has upped the ante against Rahul Gandhi, who was earlier dismissed by information and broadcasting minister Smriti Irani as a "failed dynast".

As Gandhi has galvanised his social media game and is attracting huge receptive crowds in Gujarat, the BJP now even has its ministers attacking the Congress vice-president's dog - Pidi - in pressers.

My sources tell me that with the exit of Shankersinh Vaghela and some of his loyalists, the local Congress has become a much more cohesive unit. Vaghela, a Sangh import, only offered a "me too version" of Hindutva which the voters rejected preferring the real thing.

A committee is handling ticket distribution and sources say that much depends on the candidates chosen. The Congress has not yet fallen in the BJP's trap of communal politics and is sticking to a careful script of the damage caused to the economy by the twin blows of demonetisation and GST.

Says a senior leader: "We have learnt our lesson and do not want Modi to turn this into a contest over Gujarat asmita (pride). We want to focus on real issues and the hoax that was the Gujarat model.

Modi sold the people of Gujarat a pup and we are seeing receptive crowds for the first time in years. The Vaghela exit has been a blessing in disguise as the BJP agents have been exposed."

He adds (sarcastically): "We need to thank Amit bhai for his hatred for Ahmed bhai. It seems to have knit the Congress together."

The Congress certainly seems resurgent, but without a real political structure on the ground that has withered away entirely in the decades out of power, the BJP is still the odds-on favourite to win the election.

Shah's famed booth management, three candidates for every seat selected under his personal supervision and the dog-whistle campaign are the key. The Congress despite Gandhi's extensive campaigning simply does not have the boots on the ground, or the structure, or even a credible pan-Gujarat leader.

So, what explains the nervousness displayed by the BJP? First is the fact that Shah and Modi never take any election for granted, even civic polls (for instance, the MCD election in Delhi). They are quite simply 24/7 campaign politicians.

Second, the Gujarat margin in a two-party polity will be an indication of whether India has finally got a credible opposition to Modi and the BJP.

Both Modi and Rahul Gandhi have huge points to prove.

Post your comment
#BJP, #Rahul Gandhi, #Modi, #Gujarat Assembly elections
The views and opinions expressed in this article are those of the authors and do not necessarily reflect the official policy or position of DailyO.in or the India Today Group. The writers are solely responsible for any claims arising out of the contents of this article.