The series of events ahead of the Gujarat elections point at a possible upheaval in the state's politics. The grand old party has been able to broker a loose alliance with the three turks - Hardik Patel, Alpesh Thakor and Jignesh Mavani - in the state.

While Alpesh Thakor formally merged the OBC, SC and ST Ekta Manch with Congress after weeks of hardball negotiations; Ahmed Patel and Ashok Gehlot parked themselves in Gujarat; Jignesh Mavani gave cues of reaching a possible understanding with the party; and Hardik Patel showed an inclination to support the party against the BJP.

It is no secret that the three youth leaders have an excellent equation among each other. The Congress has shown unexpected flexibility in wooing the three with top party leaders reaching out to the young turks and party vice-president Rahul Gandhi going out of the way to accommodate them.

The three leaders had earlier formed independent outfits, considering the Congress led by Shankersinh Vaghela, a political liability. Vaghela's expulsion from the Congress and the party's unprecedented grit reflected in projecting itself as more than just a default option and a visible will to survive, helped bring the three leaders to the party's side.

The alliance is giving the so-far unvanquished Narendra Modi-Amit Shah duo jitters. The coming together of these three community leaders can make it difficult for the BJP to continue its winning streak.

The coming of Thakor in Congress

Numerically, OBCs form the biggest caste group in the state. The two sub-castes of Thakors account for 22 per cent of the population. OBCs have generally been very hyper local in favour of candidates from their community and haven't been loyal to any party. But Alpesh Thakor has succeeded in giving his movement a more socio-economic colour. Instead of making his movement caste-centric, he has directed it towards issues such as unemployment, inert economy and rural distress. Above all, his movement was fashioned as an anti-liquor campaign. While Patel and Mavani agitations remained focused on social justice for their respective communities, Thakor's movement helped attract attention of the youth cutting across social groups. This, in days to come, could prove to be effective ammunition for the Congress.

Congress survived as a default option

Gujarat's politics has been interesting, despite the state being touted as BJP's citadel and Sangh's Hindutva laboratory. First, it is a two-party state and despite having virtually lost all organisational strength and local financial sources, Congress has remained a "default" option for almost 40 per cent population. The fact is that it could never garner the additional 5 per cent votes to dislodge the BJP. A vote difference of under 10 per cent, in a two-party state, drops a major hint that things always remain unpredictable in Gujarat politics.

Over the years, under the leadership of veteran Vaghela, the Congress remained inert and opted for soft Hindutva against the hard Hindutva of the BJP. It was seen as less of an alternative and more as the milder version of BJP. Gujaratis opted for the aggressive over the mild. Despite all these disadvantages and lack of proper electoral strategy, the Congress survived.

This would perhaps be the only election in two decades in which the Congress has shown some teeth in taking on the BJP.

To start with, the Congress has opted for a more issue-based approach in this election. Be it consistent protests against privatisation of education in the state, or Rahul Gandhi raising the pitch against demonetisation, Human Development Index of the state (which is shameful) or the GST mess, the party has made the fight issue specific. 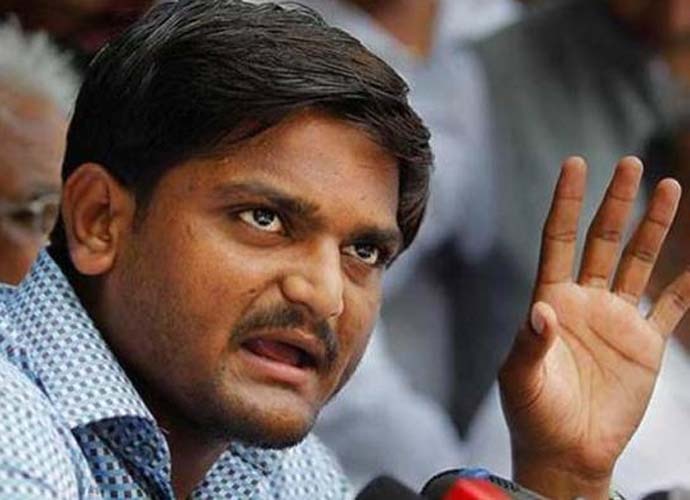 In such an issue-led campaign, merging of Alpesh Thakor's outfit, which has been clamouring for things on similar lines, is nothing less than a shot in the arm for the party. Thakor brings in an army of volunteers, a chance to get Patel and Mavani on Congress' side and enough talking points to lead an issue-based campaign.

Cobbling up a rainbow alliance

A formal entry of Thakor into the Congress suggests a good understanding of Congress with Patel and Mavani too. If the numbers are anything to go by, the three community groups, represented by the young turks, constitute close to 45 per cent of the electorate. Add to it the 10 per cent Muslim voters and a considerable vote share from Tribal groups, which have traditionally sided with the Congress. Irrespective of the ideological moorings, elections in India, often get reduced to caste equations.

If the Congress can forge this rainbow alliance of OBC-Dalit-Patidar-Adivasi and Muslim, it has the required numbers on its side.

BJP's popularity in the state is at an all-time low with several castes and communities raising the banner of revolt against the party. Add to it the GST chaos, which has made the trader community - the backbone of Gujarat politics - rise against the BJP and the jobless, directionless youth, who form a massive 40 per cent electoral strength, seeking answers - Gujarat could well slip out of BJP's pocket.

The huge crowds at Congress rallies could be a sign of growing disillusionment with the BJP, but the Congress needs to be the state's primary choice and not an anti-BJP default option.

With the way things have taken shape, it seems Gujarat politics is going to see interesting times ahead. And if, and still a big if, Congress manages to topple BJP's apple cart in the state, take that as a bellwether for 2019.

Contemporary politics will see a grand reshaping, and as for Rahul Gandhi, he would earn a place in the Congress, which probably even his mother (Sonia Gandhi) hasn't. Gujarat elections are bound to leave national footprints, who will it be directed to, is still the big question.