From delaying announcement of the poll dates to unseeing the brazen disrespect of law by the ruling BJP leaders, the EC has damaged democracy forever.

Once they happen, elections make two types of politicians - those in government, and those not. Euphemistically, they are also "in power", and not, because the chosen ones are the elected representatives of the people who are there to govern by law, their powers deriving from the constitutionally created institutions, and the people's mandate; nothing else. However, elections also ensure that one set of people do not hold on to power for too long, and that organised churns throw up challengers in democratic leadership. Precisely why, elections are sacrosanct, cornerstone of a democratic republic.

The job of the Election Commission of India, and its officers on the ground, is to ensure that during elections, the distinction between those in power and those not is completely gone, that free and fair elections are held, offering each and every candidate an equal chance to make his/her case, and each and every citizen the opportunity to make an informed decision. The ECI, along with the judiciary, have been called "institutions of restraint", required to observe strict political neutrality, bolstering democracy in the process. Conversely, when the EC fails to do its job well, as spectacularly as the one led by chief election commissioner Achal Kumar Joti, then the very foundations of democracy are shaken. 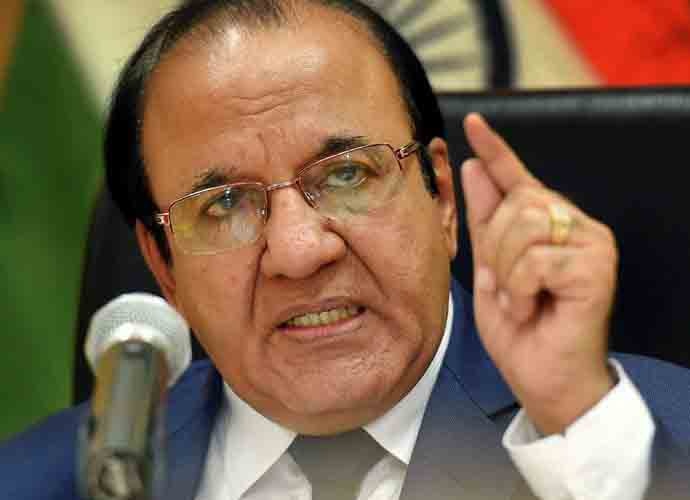 Joti, who was the chief secretary of Gujarat when Narendra Modi was the chief minister, has succeeded Nasim Zaidi as the CEC, taking over on July 6 this year. That his biography has become a talking point while judging the conduct of the ECI in the wake of how the Gujarat Assembly polls were supervised, is an unfortunate enough development. While too many Gujarat cadre officers are now occupying the top posts in India's sprawling executive, with some calling this the "Gujaratification of Indian bureaucracy", Joti's place is unique because his position directly impacts the well-being of Indian democracy and its federalism.

From delaying the announcement of the dates for Gujarat Assembly elections that allowed the ruling BJP in the Centre to announcing sops worth Rs 11,000 crore, to casting a blind eye to Prime Minister Narendra Modi invoking "mandir-masjid" in his campaign speeches, to letting the BJP get away with releasing its election manifesto, "Sankalp Patra" one day before the phase one of the polls on December 9, to PM Modi directly appealing to voters polling in the first phase while campaigning for constituencies going to polls in the second, to the one-kilometre-long road-show televised as a "post-poll walk" by PM Modi - the occasions on which EC, to put it very mildly, accommodated the BJP's high-on-stakes, low-on-principles gambles for Gujarat have been way too many.

The election rhetoric has seen unprecedented toxicity from none other than the elected prime minister himself, tarnishing the PM's office, insinuating that a former PM, with a decade at the PMO, was indulging in conspiracy with a nuclear neighbour to swing the Gujarat polls in favour of a "Muslim" CM candidate. A rattled Modi seemed to have gone back to his Gujarat CM days of "hum paanch, humare pachees" against Muslims, taking potshots at former vice-president Hamid Ansari every now and then, basically equating Muslims with Pakistan, the old bogey. At every point of PM Modi's gross misconduct, the Election Commission of India led by AK Joti looked the other way.

If someone unwittingly faltered in the Congress camp, like the veteran Mani Shankar Aiyar did and witnessed his uncharitable but not unparliamentary remark twisted and turned into instant political capital by the electorally shrewd PM and his lieutenants, he was suspended immediately by a no-nonsense president-elect in Rahul Gandhi. Yet, the Joti-led Election Commission of India, when it finally decided to act, picked the weaker party in the Opposition and a handful of Gujarati TV channels over an innocuous interview with Gandhi.

Can anyone explain: election rallies while voting is on in phase one in Gujarat fine; but interviews before phase 2 not fine! Manifesto can be released hours before polling but no interviews! #BattlegroundGujarat

The show-cause notice sent by EC to Rahul Gandhi and the TV channels, particularly Gujarat Samachar, issued for violation of Para1 (4) of the model code of conduct along with Section 126 (1) (b) of the Representation of People Act, 1951, is about an interview aired on December 13, clips of which are still available on YouTube and social media platforms such as Twitter and Facebook. In this age of instant communication, a short interview in which Gandhi talks about his formally taking charge of Congress and a "sari gifted to Sonia Gandhi" by a temple priest in Gujarat was hardly going to swing voters in either direction.

Election Commission looking bafflingly, sadly inept--threatening FIRs on the one hand, allowing road shows on polling day on the other. An unfortunate fall-out of the Gujarat poll has been way the EC is now perceived

The Chief Election Commissioner AK Jyoti was Gujarat's Chief Secretary from 2009-2013 under Narendra Modi. No wonder he is scared of the Prime Minister and has forever sullied the office of the EC

Yet, the EC took offence to Gandhi talking to sections of media in a pre-recorded interview, but not PM Modi giving a well-choreographed political speech at the FICCI one day before the polling day in the national capital that was televised live, and of course also reached the Gujarati voters. Where is the "election silence" in the case of the BJP when not just the PM - its biggest brand - but a bevy of Union ministers, the party's national president ritually issued politically loaded messages taking on the Opposition and accusing them of swaying the Gujarat elections by colluding with Pakistan?

Glitches in the matrix

It's not just the serial flouting of the model code of conduct, but the increasing distrust in the very technologies of delivering democracy through fair and transparent voting mechanism that's now come under a cloud, which should be of primary concern for the Election Commission. There have been over 100 reported instances of gross malfunctioning of the electronic voting machines, especially in constituencies that saw large-scale protests led by youth leaders Hardik Patel, Alphesh Thakor and Jignesh Mevani.

Social media bloggers and dedicated chroniclers of the Gujarat polls from the site of action, such as Twitter user @iScrew, have corroborated the reports in mainstream TV and print media that large-scale EVM malfunctioning had resulted in stalling the voting process in a number of booths. Each and every time, the malfunctioning was attributed to the vote going to the BJP despite the voter pressing the button belonging to a different party. On several occasions, the Congress button just failed to light up, or the VVPAT didn't match. But the chief electoral officer of Gujarat brushed aside these extremely valid concerns, grossly underreporting the cases while saying that EC would "probe the matter" in a future indefinite sleight-of-hand.

I can't keep up with EVM failures reporting. This is an epidemic of monumental proportions. Wonder how EC will explain in their presser after voting is over. EVM failures or EC failure in a crucial election? Mind boggling!!!

EC BB Swaine addressing a presser. As expected releasing data of EVM malfunctions at 0.8%. Says there have been 'couple of' incidents of machine failures, fixed or replaced already. Says cluster system was used in mock poll and it was successful 🙄

If the Congress appealed to the EC to take these concerns with the required gravitas that they desperately need, since the very foundations of democracy are at stake here, it was to deaf ears of an unbelievably supine institution, a blot on its once illustrious history under the commanding TN Seshan. When the Congress knocked the doors of the Supreme Court in a last-minute plea to have random checks to match EVMs-VVPATs in at least 25 per cent booths in every constituency in Gujarat, the apex court shot the request down saying it "cannot question the wisdom of the EC", which wants to restrict the exercise to just one booth per constituency.

Gujarat Congress Secy's 11th hour plea in SC to have random checks to match EVMs-VVPAT paper trail in atleast 25% booths in every constituency in the State falls apart.SC holds it cannot question wisdom of EC to restrict the exercise to just 1 booth in a constituency @the_hindu

J. Chandrachud to AM Singhvi: 1. Candidate has right to question vote count before the RO.2. SC cant interfere unless EC's decision to restrict EVM-VVPAT paper trail to 1 booth per constituency is proved arbitrary3. Cant discredit EC's call without cogent material#Gujarat

Naturally flummoxed and upset observers and public figures closely watching the rapid disintegration of India's democratic institutions have red-flagged this ludicrous decision to check the VVPAT in only one booth per constituency, putting the figure at 182 checks against 24,689 polling stations, calling into question the very need to have compulsory paper trail matching votes registered electronically. The latest decision by the EC flies in the face of earlier assurances of having VVPAT at very booth, so as to assuage growing anxiety among citizens over whether or not they could trust the technologies of delivering and upholding democracy via free and fair elections.

The great inter-dependence of India's once-robust institutions now seems to be the perfect alibi for the ruling regime's inordinate excesses. If doubts are being raised at the efficacy and impartiality of institutions that are constitutionally mandated to safeguard and bolster the democratic republic, shouldn't it be in the interest of preserving the sanctity of these flailing bodies to look into the matter impartially and dispel the just concerns?

A particularly damning report has also come in a news website that looks at the allegedly interlocking finances of the company manufacturing the frequently faltering EVMs in Gujarat and the strange balance sheet of the Gujarat State Petroleum Corporation Limited (GSPCL) which ran into "losses" worth Rs 20,000 crore searching for natural gas that never existed in the first place. How to know if the report "connecting the dots", as it were, of the faulty EVMs and an alleged "gas scam" is a case of imagination run wild unless there's a thorough investigation into the matter? And, who after all would investigate, since the Gujaratification of Indian bureaucracy is almost complete, as the precedents amply show?

As the "exit polls" predict a comfortable BJP win, the normalisation of each and every one of the above misadventures and illegalities is underway. The logic - how can there be an EVM malfunction when the Opposition in Congress is seen to have made gains, with increased seat and vote share - is just as faulty as the machines that fail to light up in a choreographed manner when a button not belonging to the ruling party is pressed. In the end, it's all "chalta hai" since in this framework of electoral Darwinism, electioneering success, no matter how unconstitutional the methods of ensuring it, is the only yardstick with which to measure power. Democracy, and the Constitution, be damned.

Post your comment
#EVMs, #AK Joti, #Gujarat Polls, #Election Commission
The views and opinions expressed in this article are those of the authors and do not necessarily reflect the official policy or position of DailyO.in or the India Today Group. The writers are solely responsible for any claims arising out of the contents of this article.