As the voting closes in the phase two of the Gujarat Assembly polls, figures are coming in and the numbers look stacked in favour of the Bharatiya Janata Party once again. According to India Today-Axis My India exit polls, the BJP is expected to get 99-113 seats in the crucial Gujarat Assembly elections, the actual results of which are scheduled to be declared on Monday, December 18.

The Congress is expected to get 68-82 seats in Gujarat this year, a gain of almost 10-16 seats from last year's 61, which will certainly be attributed to Congress president-elect Rahul Gandhi's well-fought campaign, but which may not be enough to break the BJP's unbroken stint of sixth consecutive win in Prime Minister Narendra Modi's home state. 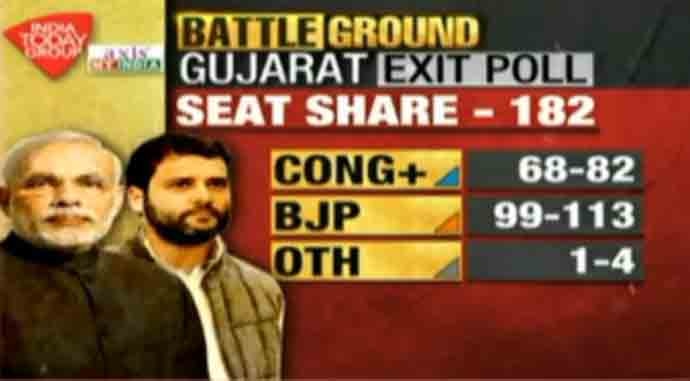 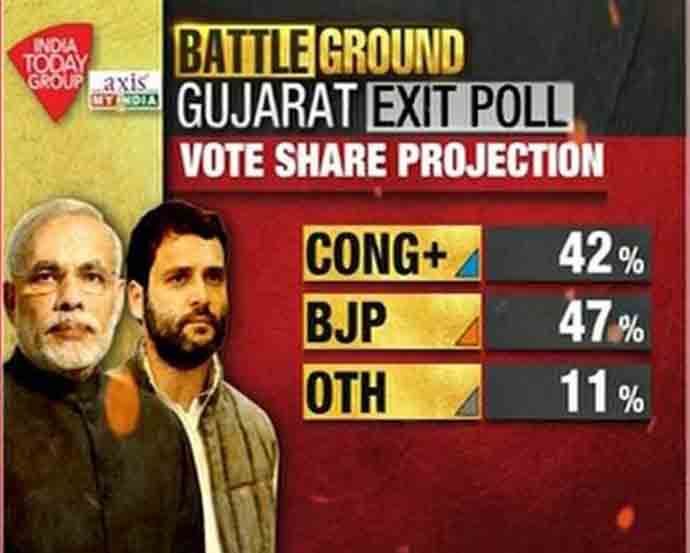 The vote share for Congress has gone up to 42 per cent this year, however, that's still behind the BJP which has got 47 per cent of the same. Gujarat has about 4.33 crore eligible voters, and saw a contest over 182 seats, in which 1,828 candidates fought it out. The voter turnout was 68 per cent in the first phase, which was a fight over 89 seats, and is still to be determined for the second, which saw a contest for 93 seats.

The exit polls predict that the urban swathes of the state have remained firmly with the ruling BJP and have chosen to put their faith in Brand Narendra Modi and his version of development. In the big cities, such as Ahmedabad, Surat, Rajkot, Vadodara, despite the strong Patidar movement led by Hardik Patel, and the OBC-Dalit agitation driven by Alphesh Thakor and Jignesh Mevani, the cities seem to have stuck their necks out to retain the incumbent BJP.

However, about 27 seats remain extremely critical and a swing of 1-2 per cent vote share can completely change the picture for the Congress party. 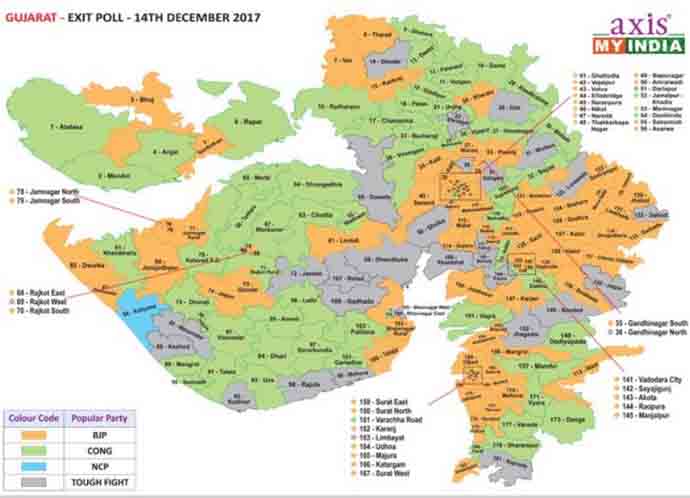 Since the opinion polls of October this year, when India Today-Axis My India polls gave the Congress only 65 seats in Gujarat, the equations have certainly changed but not enough as per the exit polls. The Congress can make a gain of 17 seats at most and the BJP's seat share might come down to 99 from the 115 that was predicted in October 2017. It seems BJP's Prem Kumar Dhumal will take over the mantle from incumbent CM Vijay Rupani in Gujarat.

The BJP is set to sweep the Himachal Pradesh Assembly polls, with 47-55 seats in the 68-seat Assembly, with the Congress bagging only 13-20 seats in the state where the incumbent government is led by chief minister Virbhadra Singh. The BJP is likely to get 50 per cent of the vote share, while the Congress would get 41 per cent and others would bag about nine per cent of the electorate. 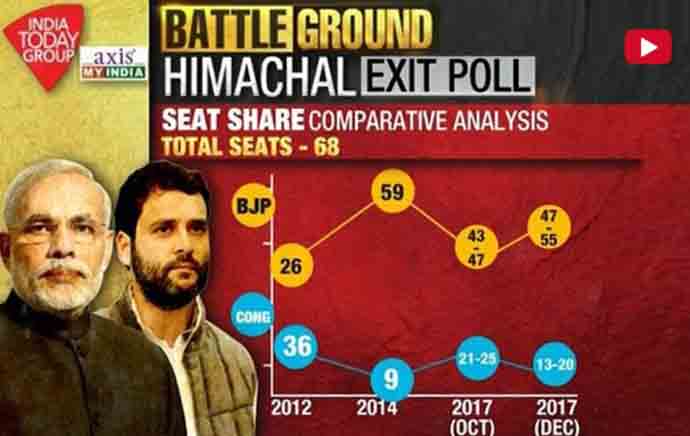 India Today-Axis exit poll gives the BJP a clear victory in the Congress-ruled Himachal Pradesh, which has 68 Assembly seats.#ExitPoll2017https://t.co/utFqiOQLKz

Caste-based voting is ensuring the big win for the BJP, with the upper castes and classes - including the Brahmins, Kshatriyas, Rajputs, Baniyas, among others, contributing to the 50 per cent winning voting percentage.

On the other hand, Congress' vote share has come from Muslims and the SC/STs, as well as the poorer sections of the society.

However, the votes have been equally distributed in case of the BJP, from rural to urban, men and women, professionals, farmers, students, chunk of the middle classes opting for the saffron party.

It must be noted that the Himachal polls weren't really fought on a single major issue, and the state has alternated between the BJP and the Congress in Assembly polls for three decades now, especially since 1985.