How BJP won a losing battle in Gujarat

Of course, the BJP for now has managed to retain Gujarat, but certainly not its hold over Gujaratis. And this despite the saffron party pulling all stops - the prime minister addressing 34 rallies across Gujarat, grand road shows in Surat and Rajkot, announcement of the high-speed bullet train, taking the "first-ever" seaplane flight on the last day of campaigning. Yet the ruling party managed to bag only 99 seats out of a total 182 - way below its original target of 150-plus.

Now, the Modi-Shah duo is blaming the Congress's "caste politics" for the BJP's abysmal performance. Truth be told, the BJP has fallen in its own trap of caste and religious politics. May be that is the reason why the mood at the BJP headquarters in Gandhinagar yesterday (December 18) was initially tense - there was so much confusion for a long time whether to celebrate or to wait for the green signal from party high command. The party can't even pin the blame for its loss in vote-share on anti-incumbency. Everybody knows the ground situation.

All said and done, the urban power centres of the BJP remained intact and Congress and Rahul Gandhi failed to breach the high walls. Despite all odds, the BJP has not only won urban votes, but have crushed the Congress - 15 out of 21 seats in Ahmedabad, all 12 seats in Surat city, six of eight in Rajkot, nine out of 10 in Vadodara, all four in Bhavnagar. That's a clean sweep.

Despite widespread discontentment among traders following the disastrous demonetisation and an even worse GST, urban and upper middle class, educated voters have still remained loyal to Modi. Rahul Gandhi has still not been able to match PM Modi's flamboyance and confidence. Rahul has a long way to go before urban voters can trust his leadership. 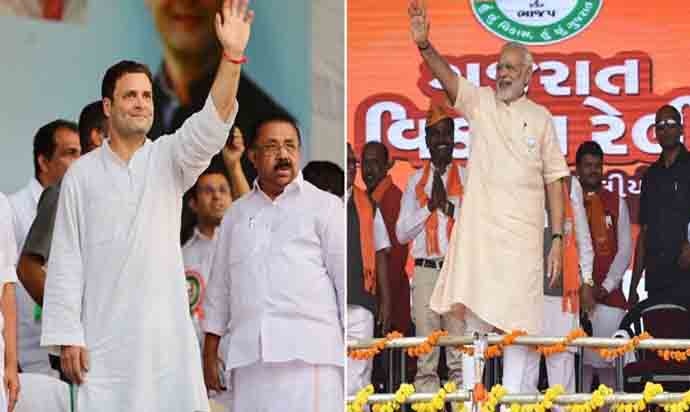 The 2017 Assembly elections will also be remembered as a battle where the Patidars emerged as the most important factor. While Rahul Gandhi managed to forge a pre-poll alliance with rising star Hardik Patel, it still didn't manage to sweep the Patidar-dominated pockets - out of 18 in Saurashtra and Kutch, Congress won 12 seats; of eight seats in north Gujarat, Congress won three; out of two in central Gujarat and five in south, the Congress won none.

A young and much-influential Hardik Patel had toured across Patidar-dominated areas addressing around 40 small and bigger rallies, but his magic was not enough to turn the tide entirely in the Congress' favour. Most surprising was the case of Surat.

Hardik's influence seems to have worked more with Leuva Patels than the Kadva Patels. But more than that it looks like the Congress' last-minute efforts and confusion over alliance with Hardik Patel failed to yield the desired results.

But to its credit, the Congress managed to win the Unjha seat which encompasses PM Modi's hometown Vadnagar.

The BJP has a lot to ponder over about its loss in the rural belt. While a complete loan waver may have worked in Uttar Pradesh, rural voters in Gujarat turned their back on the BJP, especially in places like Saurashtra and Kutch where out of 54 seats, Congress won 30. In addition to the agrarian crisis, unavailability of water for agriculture and demonetisation badly hit farmers, particularly the cotton and groundnut farmers.

The BJP was routed from districts such as Amreli, Junagadh, Gir Somnath and Surendranagar. So if urban areas saved Gujrat for BJP, the rural belt has given the party enough reasons to think about its mistakes.

One Rahul Gandhi is not enough

There was a time when Gujarat was known for strong local leadership within the Congress party. It's not only Gujarat, but other states as well. But that's not the case any longer. The Congress party needs local leaders with enough influence over the voters. It cannot depend on one Rahul Gandhi, who too has just "arrived" in politics, to steer it to victory in every state. It's the growing TINA (there is no alternative ) factor which went in favour of the BJP on the seats which could have been won by the Congress with the help of tall local leaders. On the contrary, all Congress veterans have lost their seats - Shaktisinh Gohil , Arjun Modhvadia, Siddharth Patel.

Youth can be the agenda

Gujrat elections have seen a "generation shift" in the politics of the state. With the emergence of Hardik Patel, Alpesh Thakor and Jignesh Mevani, one thing is clear - youth power is here to stay. With Jignesh Mevani and Alpesh Thakor's big wins, many will be looking forward to their performance in the Assembly as the Congress is more known for playing a weak opposition.

Did the temple visits help?

One thing that kept both Rahul Gandhi and his detractors terribly busy this elections in Gujarat was the former's temple run. The newly anointed Congress president visited more than 20 temples across the state to send out the message that the Congress is not just about "minority appeasement". Rahul's much-overt soft-Hindutva could be compared with Atal Bihari Vajpayee as prime minister, attending iftar party during Ramzan. Just like Vajpayee's gesture couldn't change the BJP's image among the minorities, Rahul's temple visits hardly made a difference to the narrative that the BJP has built among Gujarati voters.

The fact that the Congress won several Muslim-dominated seats despite not focusing on the Muslim vote during the campaign, shows the party would have done better to invest more in building its voter base among the community. Muslims constitute a tenth of the state's population, after all. It's soft-Hindutva may see the Congress losing its base entirely in future.

It's not easy to keep winning elections by beating anti-incumbency, especially for a sixth time. The communists managed to achieve that in West Bengal. The BJP is second party which seems to be on its way to break that record. Even though BJP's Gujarat march started with a strong Patidar base and aggressive Hindutva, Narendra Modi after his second term slowly tilted it towards development as poll agenda. It yielded good results, especially from urban voters. May be that is the reason why, despite demonetisation and GST, urban voters remained loyal to the party. For some reason, the Congress hasn't been able to counter this narrative of Gujarat model in the state as far as urban voters are concerned.

Rallies are not enough

It is said when the BJP lost the parliamentary elections after Indira Gandhi's assassination; Atal Bihari Vajpayee had said: "Sunne aate hai log, vote dene nahi aate (people come to rallies to listen to my speeches, but they don't vote for us)."

Huge turnouts at rallies doesn't necessarily translate into votes. The overwhelming response to Hardik Patel's rallies in south Gujarat hardly translated into votes. The margin by which BJP candidates had won in the Patidar-dominated areas in south Gujarat earlier remained intact despite such positive response to Hardik's rallies. Yes, one can definitely get a sense of which way the wind is blowing, but not necessarily of who is going to sweep the polls.