How can it be that right under the watch of such a competent CM, lawlessness reigns supreme?

On the fateful day of Feburary 28, a 72-year-old Indian Muslim's fingers and legs were first chopped off and then he was burnt to death by a bloodthirsty mob, comprising mostly members of the Sangh Parivar. He was not the lone victim in the massacre that took place at the Gulbarg society.

Sixty nine Muslims were murdered with such heart-rending brutality that words fail to grasp the cruel proportion of the events that shamed the whole Indian republic. This 72-year-old, Congress leader Ehsan Jafri, was no ordinary man. Jafri was among the political stalwarts of Gujarat, having been an MP and one of the grand old party's top leaders. 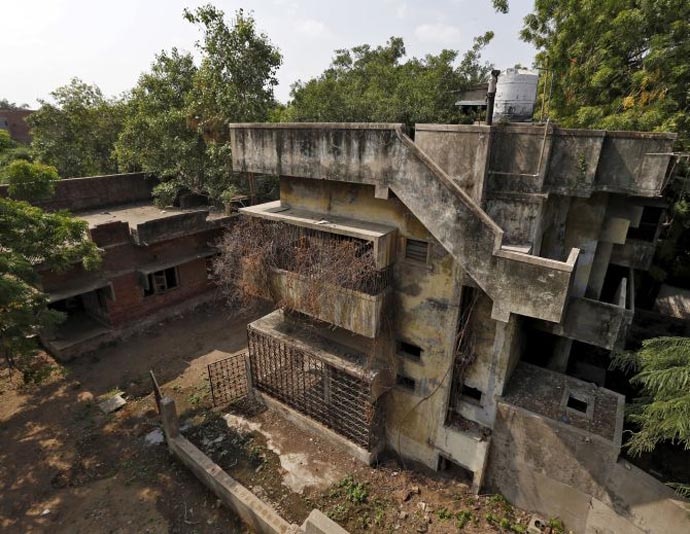 It simply is hard to swallow that our minorities can be slaughtered in one of India's richest state capitals.

And it was not as if the massacre happened in a lawless war front like Somalia, it happened in the heart of Gujarat's capital. Eyewitnesses and Jafri's wife recount that he made frantic calls to every senior officer - from the commissioner, to the DGP - to even Narendra Modi, the then Gujarat CM, only to be fed to the wolves by the whole system.

The massacre at Gulbarg society was the second largest in terms of the death toll after the Naroda Patiya carnage (in which Maya Kodnani, who was made a minister in Modi's government even after she had been named in the massacre, was convicted for conspiracy and sentenced to 28 years in prison).

On June 2, after 14 long years, a special trial court announced its verdict in the Gulbarg society massacre. But what should have been a relief for the relatives of those who had waged an uphill battle for justice turned out to be a day of brutal disappointment.

The court ruled out the conspiracy angle, convicted merely 24 people (of whom 11 alone were convicted of murder) and acquitted 36 others, including BJP leader Vipin Patel and former police inspector KG Erda.

While there is not much the court could have done in light of the botched-up investigation, there is no escaping the fact that the judgment was a case of justice delayed as well as denied. The judgment once again raises many disturbing questions and thoughts.

The big fish have escaped while the small ones have been caught.

The court, while convicting the ordinary worker who actually carried out the killings, has found insufficient evidence to proceed against the big fish who were the brains behind the massacre.

It simply is hard to swallow that our minorities can be slaughtered in one of India's richest state capitals in a massacre that stretched for hours. Such incidents cannot happen without some protection from the system.

After all, it was Gujarat and not war-torn Somalia that the state was so incompetent and helpless in tackling a few thousand bloodthirsty crooks. The high and the mighty within the system are usually the real conspirators in such planned massacres.

And let's not forget the state machinery was then under the charge of our current PM, whose exploits of good governance have been so relentlessly reported.

How can it be that right under the nose of such a competent chief minister, lawlessness and anarchy reign supreme without the CM even being  informed (as Modi claimed in his deposition before SIT)?

If Modi was not informed throughout the day such gruesome lawlessness prevailed, it raises serious doubts about his governance credentials; it reveals the worth of someone who shirks responsibility and refuses to lead from the front when the situation so requires.

And if he was informed (as claimed by the victims of the massacre), then the questions about Modi's commitment to our constitutional values and his duty become even more questionable.

Either way, Modi's role in the whole episode raises serious questions, which have again been renewed as the memory of the massacre has been revived in the light of the judgment.

Legitimising the rioters' narrative of no conspiracy, only natural reaction

The masterminds of the riots often create the narrative that the riot was a natural reaction and not a criminal conspiracy. This they do to escape prosecution and shift the blame of their sins on the public.

But ordinary people are not the devils politicians want us to believe they are. Most of us are peace-loving, tolerant and at times indifferent individuals who tolerate the worst of abuses our politicians commit without ever doing anything other than complain about them in our drawing rooms.

For such people to be blamed of mass murder of those who they know personally, unlike the politician who they don't know and yet never harm despite all the atrocities committed by them is stretching the limits of belief.

These large-scale riots inevitably happen due to conspiracy. The conspiracy has many elements. Misinformation is spread. Ordinary folks' sentiments of hate and fear are worked upon as was done here in the aftermath of Godhra burning.

These folks who don't have weapons are supplied with them. They are provided with transportation, means of identifying their victims, assurance of safety from prosecution and even the lure of rewards - financial and otherwise. The system orphans the victims.

In the aftermath, investigations are scuttled and the guilty shielded. It is then that men turns into monsters, ordinary law-abiding citizens turn into murderers. It is this conspiracy which caused past riots and this is also the modus operandi of the Gujarat riots and the Godhra killings.

But as logical and easily comprehensible as the conspiracy is, it is hard to legally establish and, more often than not, the conspirators escape justice. But every time that happens, the belief in inevitability of justice suffers. Without meaning to, the judicial system ends up legitimising the rioters' narrative of no conspiracy and natural reaction. This is what happened with the Gulbarg society verdict.

While those who died in the Gulbarg massacre will never return, justice for their perpetrators can bring peace to those who were left behind to wage the struggle on behalf of the victims.

Justice in the Gulbarg society case is also necessary to restore the confidence of one and all that in India justice may, at times, be delayed, but it is never denied.

It is necessary so that the civilisational ethos of Satyamev Jayate rings true.

#2002 Gujarat riots, #Modi, #Gulbarg Society massacre
The views and opinions expressed in this article are those of the authors and do not necessarily reflect the official policy or position of DailyO.in or the India Today Group. The writers are solely responsible for any claims arising out of the contents of this article.