From BJP to Congress, will political parties shun babas like Ram Rahim who exploit followers?

The question that looms large in the wake of the Dera Sacha Sauda insurgence against the rule of law following the indictment of Ram Rahim is, “How long will this unholy nexus between godmen and politicians last?” That is because of the brazenfaced indulgence via inaction the State extended to the lumpen elements among dera premis, who were allowed to hold Haryana to ransom.

No one in this country believes that mobilisation and mayhem on such a scale could have happened without the patronage of the State.

Cultivating and keeping fraud godmen favourably inclined is a temptation that politicians of all hues are too unprincipled to resist. Ram Rahim could not have become a larger than the State phenomenon without the Congress and the BJP competitively sucking up to him. As of now it looks a smart and mutually beneficial arrangement. But what does the future hold?

The answer to this question lies in the early history of the relationship between religion and politics. Regarding it, we need to reckon the big picture and ask, “What is the significance of Hindutva trying to drag India out of its polytheistic and pluralist tradition, and evolve a de facto monotheistic State, with Lord Ram as the national deity, which goes against the grain of Hinduism? How does this bear on the "one nation, one people, one language" agenda?

History tells us that monotheism — or the worship of a single deity — is political in origin. Regional polytheism was the order of the day during the tribal phase of human existence. Various tribes had their exclusive deities. As long as these deities held sway, their respective tribes could not be brought together and integrated into a nation. For better, for worse, a monotheistic God is the only viable nucleus for national uniformity. Multiple gods, with citizens divided and distributed among them, hinder the creation of a homogenised nation. 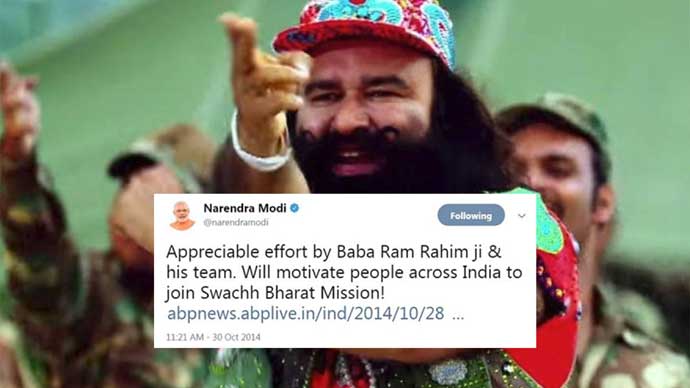 The BJP justifies its misdeeds with reference to what the Congress did, and vice versa. Photo: DailyO.in

The emergence of godmen bears witness to the fact that the dormant tribality in our national psyche has been awakened by the pressures of modernity and, in particular, of globalisation. Godmen serve as de facto reincarnations of tribal deities. Every feature of the godman syndrome points in this direction. They preside over autonomous islands of tribality within the ambit of a modern State.

So, the core principle is clear: it is not in the interests of a modern, secular State to let multiple godmen thrive as centres of power that rival its own authority. Even so, it is alluring to politicians to cultivate and fatten them in the short-term. The irony of politicians trying to capture State power with the help of godmen, who run their own states, should not be lost on us. They undermine the State - as was chillingly clear in the death-dance in Panchkula - in the process of capturing the state. It is unlikely that the vote merchants of BJP and Congress were aware of this.

Now, to the question: what about the future? How is this going to play out?

One thing is certain. Even though the honeymoon between the State and fraud godmen has gone on for some time, this can only be a temporary and passing phenomenon. Its days are numbered. In this respect, Haryana is the laboratory for other states as well. Already Ram Rahim has grown large enough to hold two states to ransom. The ruling elite, especially in Haryana, have to go and prostrate themselves before him and offer huge sums periodically as insurance premiums for political survival.

In olden days, the proof of a conqueror’s authority over the subjugated people was his entitlement to taxes. In the way the situation was handled, the Khattar government was paying its wealth tax to the baba.

Money, no matter how huge the gift given, hardly interests these deities of depravity. The pound of flesh they demand is the right to flout laws with immunity. Clearly, Ram Rahim did not expect the outcome of the CBI court trial to go against him. Even the BJP government in Haryana didn’t.

The administration played fast and loose with the imposition of Section 144 and let the dera premis have a cakewalk over law and order. This was done on the calculation that he would be acquitted. In that event, this would have paid off brilliantly.

It is here that our story really begins. This event is the State’s date with truth. From a relationship of reciprocal parasitism between the State and a fraud godman, the scenario has morphed into State versus godman, thanks to the pro-active vigilance of High Court of Punjab and Haryana and media pressure. The BJP cannot continue its equation with the baba, without dismantling all institutions of rule of law, including the judiciary, which looks a tall order now.

So, the present uneasy calm will change into bitter hostility between Dera Sacha Sauda premis and BJP. The stratagem to secure the permanent loyalty of the godman and his followers will backfire, given the logic of history. A secular, democratic State cannot come to be, so long as parties continue to curry favours with fraud godmen.

As citizens we need to reject the argument by which politicians fool us. The BJP justifies its misdeeds with reference to what the Congress did, and vice versa. We are not interested in knowing which party is smarter at corruption. We are interested only in good governance, which was promised to us. Given that, we cannot condone inept governance and wilful ethical lapses because they happened in the past. The question to ask is, “If you are as bad as the party we rejected, why should we endure you?”

We won’t have to wait too long to realise that the Ram Rahim episode is a turning point in the drama of State-godmen trade-offs. There are only two possibilities.

Either the State realises the danger and keeps such frauds and freaks on a tight leash, or the State refuses to learn from the present fiasco and keeps itself open to recurring ridicule.