Why the answer to that question changes, depending on who's asking.

In 2011, then-President of the United States, Barack Obama, announced that the US military had located and killed 9/11 mastermind, Al Qaeda chief, Osama bin Laden — who was hiding in Pakistan's Abbottabad.

“Hamza was very threatening to the US,” was all Trump would vaguely say when he was asked to comment on news reports that say Al Qaeda’s 30-something crown prince is no more.

In these eight intervening years, Al Qaeda has seen severe erosion in the face of the aggressive advent of the Islamic State (IS). But the news of Hamza bin Laden's death just a year before the US Presidential Election 2020 raises many interesting questions. Chasing Hamza: Was he dead when the US announced this reward? Possibly. (Photo: Reuters)

When was he killed?

The report went public on July 31, with three unnamed US officials confirming it. The terror group has neither accepted, nor denied the report. The US State Department didn’t make any statement. It’s not clear whether they would. Donald Trump refused to comment and then said what he said.

However, all reports point to a vague time period in the first two years of Trump’s Presidency.

Hamza was named a “specially designated global terrorist” in January 2017. Earlier this year, the United States announced a reward of $1 million to track Hamza down. Some emerging reports indicate that Hamza was actually dead by the time the US announced the reward. 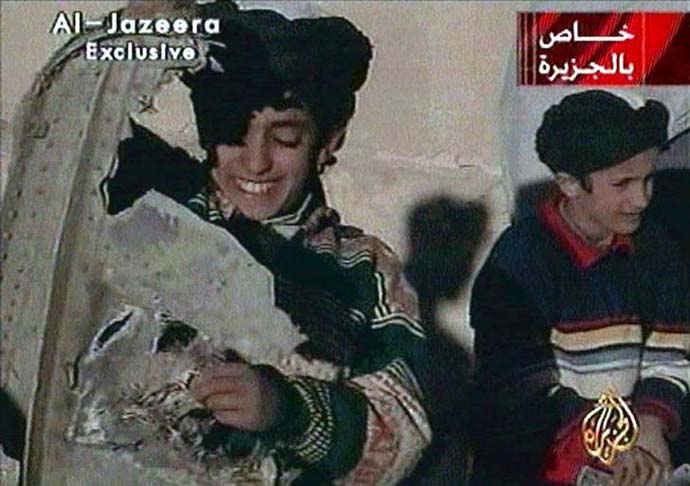 Macabre toys: A 2001 photo of Hamza displaying wreckage from a US helicopter near Ghazni. (Photo: Reuters/Al-Jazeera TV)

How was he killed? Is he actually killed?

After the Abbottabad operation, it was rumoured that Hamza, too, died along with his father. But later, he was shown as missing. Just a few days ahead of the Abbottabad attack, he apparently fled and was in oblivion until 2015 — when his first video emerged, where he was introduced by Al Qaeda chief Ayman al-Zawahiri.

According to the website of the United Nations Security Council, Hamza released a video in 2018, “denouncing Saudi Arabia and calling for the overthrow of the monarchy in an effort to recruit viewers to Al-Qaeda”.

A number of militants were reportedly killed in 2017 in a US drone attack on the Af-Pak border. If the 2018 video is true, then Hamza was definitely not killed at that time. Not Present: Hamza, it is believed, left Pakistan's Abbottabad just a few days before the US attack in which his father was killed. (Photo: Reuters)

No confirmation. He was with his father in Afghanistan before 9/11. He was in Abbottabad, Pakistan, in 2011. He was also in Iran.

He was married to a daughter of the 9/11 hijacker Mohammed Atta and had three kids. Saudi Arabia had stripped him of his citizenship.

The name of Al Qaeda has not been in wide circulation for a long time. Apparently, the terror group has been in hibernation since 2011. Its last major attack was the Charlie Hebdo shootings in Paris in 2015.

But it’s not dead.

According to reports, it has adopted a new method to strengthen its links with local groups. Hamza was the fresh young bait and since real details of his reported death are not confirmed, there’s no reason to think that Al Qaeda is going to disband any time soon.

Why Hamza is important for USA/Donald Trump?

Though nothing else is confirmed, the role of the US in killing Hamza is almost certain.

The other thing that's certain is that it took place after Donald Trump became the President.

Since Donald Trump is campaigning for his re-election, his anti-terror messages and apparent actions in eliminating terrorists won't fail to impress American voters.