The Haryana government’s April 11 response to concerns around the information it is collecting statewide through a school admission form  raises more questions than it answers.

For those coming in late, the form mandatorily seeks information on, among other things, students’ and parents’ name as mentioned in their Aadhaar cards, students’ bank accounts (if they have one), parents’ mobile numbers, parents’ occupations, including whether they are into "unclean" jobs, and parents’ annual income.

Among the optional fields are students’ and parents’ Aadhaar numbers and parents’ permanent account numbers (PANs). Media reports suggest that not all schools are comfortable asking parents to furnish such unusual data, and the Opposition has flayed the form for its casteist tone and alleged a surveillance agenda behind it.

Before analysing the government’s official defence, let us first respond to a line that its apologists initially took: that "serious" data like Aadhaar and PAN are optional, implying thereby that the exercise was not as coercive or intrusive as it is made out to be.

This is far from the truth. In routing data collection through schools, the government has been clever to not only cast the net wide (given high enrolment levels in the state), but also expect high compliance. Mindful of wards’ interests, schools are institutions that most parents adhere to and, hence, are unlikely to take information requests from them lightly. 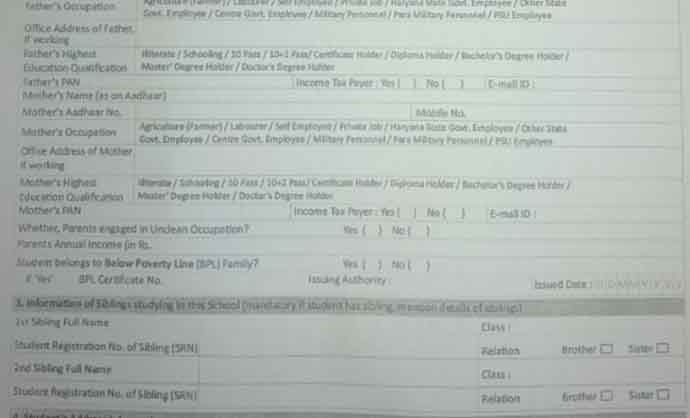 Further, in embedding a sizeable number of optional questions and hinting at how the data collected would lead to streamlining of government benefits to students, the exercise has ensured that parents will think twice before omitting an optional field.

Would an incomplete form impact available or potential benefits for my child, especially since others may be submitting fully filled-in forms? This is a question most would ask themselves. The optional field is an optional one only in theory once such a question is being raised.

There is little doubt that the government is conscious of the optics of making certain fields mandatory, but also aware of the subtle pressures operating on parents when it comes to information solicited via schools. Hence, the pushing of the potentially contentious Aadhaar and PAN fields to optional-in-name fields.

The government’s central line of defence - that data gathered will ensure better targeting and flow of benefits under various central and state government schemes, including direct transfer of monetary benefits to students’ bank accounts - cuts no ice either. The stated purpose of the exercise demands that: (a) all students eligible for benefits under various schemes identify themselves; and, (b) relevant bank account details are known, logically, including those of parents in case students themselves do not have bank accounts.

The form ensures neither. Disclosure of mental and physical disabilities is optional, meaning the exercise may not yield a comprehensive database of all eligible beneficiaries. And, with bank account details restricted to students’ accounts, direct transfer of monetary benefits may not be possible in the large number of cases where students do not have bank accounts of their own.

More importantly, the streamlining objective of the exercise would remain unfulfilled even if disability data was mandatory and parents’ bank account details were collected. For things to be truly simplified, the government would need to go a few steps further, accept all self-disclosures at face value, and eschew its customary documentation and verification procedures - this is implausible, given both the absence of any concrete policy roadmap expressing such intent and administrators’ ingrained (and not entirely misplaced) suspicion of self-attested data.

In effect, it means that the form will generate data without any significant change to business processes - making it a meaningless exercise. Or worse, given the many imaginative ways of harassing citizens the lower bureaucracy is capable of, an added layer of complication in accessing legitimate benefits.

With the exercise thus being optional only in name and data collected unlikely to serve its stated purpose, it is only natural for speculation to occur on the exercise’s true motives, especially at a time when efforts to link Aadhaar numbers to mobile numbers and PAN are under scrutiny.

Could the form be a sly attempt to obtain such data? One does not know for sure, but in the absence of any explicit assurance that data from the form will be used only for its stated purpose and the general wariness about data leakage, it is a question worth raising.

Further, with the exercise, there is also the likelihood of individual’s data lying around in thousands of schools across the state, and mindboggling prospects of their misuse.

Last but not the least, there is something to be said about the mention of unclean occupations. In its defence, the government has said the term is not its original coinage and finds mention in existing laws and scheme guidelines. This is lame.

Surely, there could be more sensitive ways to probe this. Its own official response breaks down unclean occupations into "presently engaged in tanning/ flaying" and "engaged in manual scavenging up to January 1, 1997" and these themselves could have been used in the form.

But then that perhaps was too much to expect from a form and an exercise that is ham-handed and exceptionable at so many levels.

Also read: Why India is on the brink of a caste war