A compromise candidate dependent on Congress, he had no real agenda, apart from survival.

HD Deve Gowda, former Indian PM and ex-CM of Karnataka turns 83 today. On June 1, 1996, Gowda took oath as the eleventh Prime Minister of India, heading the united front coalition of 14 parties backed by the Congress and the Left from outside (318 MPs).

"The homespun, rustic, provincial politician became the first low caste PM in India since independence. He referred to himself as a simple farmer, spoke halting English and had no real political ambitions beyond his home state of Karnataka, where he was the CM since 1994."* 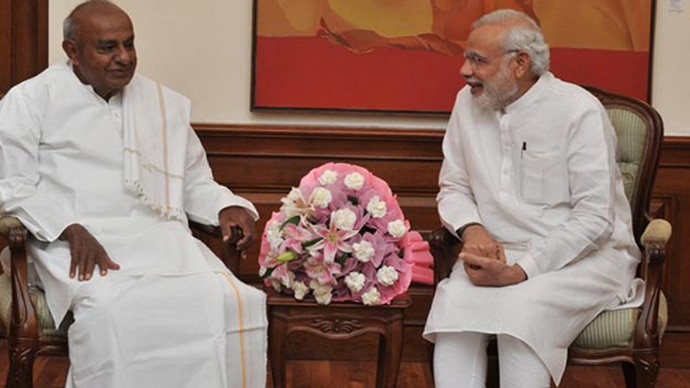 The president then appointed Vajpayee as PM, but the BJP veteran failed to prove majority. With Congress in no mood for fresh polls, for the third time in history (after Charan Singh and Chandrasekhar's tenures), the grand old party decided to prop up a non-BJP minority government.

Gowda emerged as a compromise candidate for PM. He was the fourth choice (after VP Singh, Jyoti Basu, Moopanar) of the third front because the partners of the coalition wanted to check one another's ambition.

He was considered close to former PM PV Narasimha Rao."Once Rao was replaced by Hindi-belt Kesri, Gowda's days were numbered as he was seen as Rao's man (south Indians did not have a majority within the Congress parliamentary group after the 1996 elections)."**

In March 1997, Kesri withdrew support from the Gowda government citing the PM was not consulting Congress on key policy decisions. However, the real reason was that Gowda had rejected Kesri's proposal of supporting Mayawati as CM and rejected his plea to remove Romesh Bhandari as UP governor.

The united front leader had a love-hate relationship with Lalu Yadav - they were competitors for the post of PM. Interestingly, there was a time when Gowda used to run to Bihar Bhavan to meet Lalu Yadav to keep his chair, but after his name figured in the fodder scam and the CBI wanted permission to prosecute him, Lalu had to wait for days on end to get a five-minute appointment with the PM.

Gowda was notoriously known for his habit of dozing off during Parliament sessions, conferences and meetings. DLF Chairman KP Singh, in his autobiography, recalls such an incident. He accompanied a delegation of businessmen to meet Gowda to apprise him of the deteriorating state of the Indian economy. "After the presentation we got the distinct impression that Gowda was not listening. Suddenly he sat up and exclaimed, 'I am glad that the economy is doing well'."

Before the LS polls in 1999, the faction led by Sharad Yadav and JH Patel joined the NDA.

Gowda wanted to maintain equidistance from the Congress and the BJP and hence formed Janata Dal (Secular).

In May 2004, his party bagged 58 seats and, along with Congress, formed the first coalition government in Karnataka. However, differences cropped up and the JDS pulled out of government in January 2006.

JDS formed a pact with the BJP (which he had objected to five years earlier) for the sake of power. His son Kumaraswamy became the CM for 20 months - from February 2006 to October 2007.Under his prime ministership, the then finance minister P Chidambaram presented the dream budget for the year 1997-98, carrying on the legacy of Rao, his mentor. Born into a farmer household himself, Gowda always championed the farmer's cause inside and outside legislature.

He was in the news before Lok Sabha polls as the BJP claimed that Modi would be the first OBC PM of country. Nitish had hit back stating Gowda was the first OBC PM. The former PM is not new to controversies - he had claimed before polls that he would retire from active politics if Modi becomes PM.

He hasn't fulfilled his promise yet. Recently, he supported Vijay Mallya claiming that the latter was a son of the soil.

Janata Dal was a powerful entity in Karnataka until Gowda forced Lalu to expel old rivals - Hegde and Bommai. The general perception in North Karnataka is that during his chief ministership, Gowda acted as CM for South Karnataka, depriving the North of any real development because it only had a small percentage of Vokkaligas.

Was he better off as a regional satrap? This is something which must be haunting him day in and day out. If not PM, he would have continued as CM of Karnataka and a strong regional force. Today, he is known for his listless tenure as PM and, nationally, has a lower stature than regional players like Mulayam Yadav, Nitish and Chandrababu Naidu.

To sum up, Gowda was not able to remain in office long enough to establish any significant precedent.

A compromise candidate dependent on Congress, he had no real agenda, apart from survival. However, he is an inspiration to all politicians, as he gave them hope that they too could become PM one day.

*India: Government and Politics in a Developing Nation by Door Stanley A. Kochanek,Robert L. Hardgrave)

#Congress, #HD Deve Gowda
The views and opinions expressed in this article are those of the authors and do not necessarily reflect the official policy or position of DailyO.in or the India Today Group. The writers are solely responsible for any claims arising out of the contents of this article.