HD Kumaraswamy’s oath taking ceremony has indubitably been a dress rehearsal for 2019 elections.

It was much more than a mere photo-op. Just consider the scenario. Bahujan Samaj Party and Samajwadi Party chiefs Mayawati and Akhilesh Yadav respectively sharing the stage at a swearing-in ceremony for the first time ever. Congress leaders Sonia Gandhi and Rahul Gandhi posing with Mayawati. Sonia and Mayawati hugging like sportspersons from the same team. 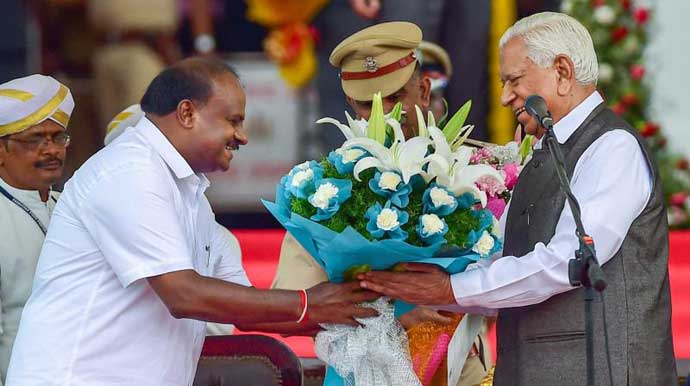 Virtually, the entire Opposition was in attendance. The notable exception was regional satrap and chief minister of Odisha Naveen Patnaik (chief of Biju Janata Dal), indicating that the Opposition still has some work to do. Though another chief minister and regional satrap K Chandrasekhar Rao (chief of Telangana Rashtriya Samiti) was conspicuous by his absence at the swearing-in, it must be pointed out that KCR visited Kumaraswamy in Bangalore only yesterday to express solidarity with him, apprising him about the pre-arranged engagement he couldn't cancel and telling him that he would be sending his son for the oath-taking, which he did.

This stupendous gathering of Opposition, a rarity in Indian politics ever since the Modi-era, is well-orchestrated optics for Mission 2019. It's the first hurrah of a fast unifying Opposition. It has taken them four years. It is worth mentioning that this show of Opposition unity did not happen in February 2015, when Kejriwal's Aam Aadmi Party (AAP) made mincemeat of the Bharatiya Janata Party (BJP) months after the Modi tsunami, winning 67 seats in the 70-member Assembly, leaving the rest for the BJP and the Congress with a zero. The Opposition at HD Kumaraswamy's oath taking ceremony on May 23.

Nor did the Opposition put up such a grand unity show at the next red letter day ten months later, when the grand alliance of Rashtriya Janata Dal (RJD), Janata Dal (United) and the Congress trounced the BJP in the October 2015 Bihar Assembly polls. Two back-to-back political reversals for the Modi-led BJP suggested a seemingly early demise for the BJP.

However, nothing of the sort happened and since then, the same old story has repeated itself across the country: BJP winning and the Opposition losing all Assembly polls.

For the first time since the Bihar polls, the Opposition got something worth cheer in this month's Karnataka Assembly elections that threw up a fractured mandate. And look at the quirk of fate. The BJP met its Waterloo even after emerging as the single largest party with 104 seats, just seven short of a clear majority as against 78 of the Congress and 37 of the JD(S).

It happens only in politics that a party finishing last in a three-horse race becomes the eventual winner.

But the BJP's embarrassment stems from the fact that it failed to gain power in Karnataka even after winning 104 seats, though it managed to form governments in Goa, Manipur and Meghalaya where the Congress was the single largest party — Meghalaya being the most ludicrous example of political impossibilities where BJP won just two seats in the 60-member house.

Karnataka may well prove to be a turning point, politically speaking. No, it's not just because of the fact that the BJP’s juggernaut was finally stopped in Karnataka. Nor is it because the BJP had to eat the humble pie even after an indulgent governor swore in BJP's BS Yeddyurappa as chief minister — who decided to resign 55 hours later without even facing the trust vote.

But the most important factor, which may make Karnataka a political watershed, is Kumaraswamy’s swearing-in — an event the entire Opposition used in order to showcase its unity.

First, whether the Opposition bonhomie on display in Bengaluru today will continue till the next general elections. Second, even if considering the utopian scenario from the Opposition viewpoint that its unity will remain intact it remains to be seen whether it produces a contrary effect and makes the electorate to tilt towards Modi's BJP. The BJP is already working overtime in carpet bombing social media with this message: “The Mahabharata says when everyone gets united against one man then that man must be a true, capable abd hobest leader.”

Third, whatever the final scenario, the very fact that the Opposition has finally succeeded in gathering on one common platform is no mean achievement.

Post-Delhi, the AAP has steadily gone down the hill and even lost to the BJP in the Delhi municipal elections this year. Similarly, post-Bihar, the Opposition’s celebrations didn't last long and the state fell back into the BJP's lap as Lalu Yadav and Nitish Kumar parted ways.

This is the third time when the Opposition is feeling jubilant and resurgent. Yet again, the Opposition-versus-BJP game is playing out and the Opposition parties must be wondering whether it's going to be third-time lucky for them.

It will be quite an uphill task for the Congress-JD(S) coalition government to avoid a repeat of the Bihar experiment. The BJP may be down but definitely not out.

Whatever may be the final outcome, the Bangalore event promises to throw open a bigger political game on a much wider canvass — one the Modi-led BJP would be ignoring at its own peril.

#Opposition, #BJP, #Karnataka Assembly polls, #Hd kumaraswamy
The views and opinions expressed in this article are those of the authors and do not necessarily reflect the official policy or position of DailyO.in or the India Today Group. The writers are solely responsible for any claims arising out of the contents of this article.