She's known more for her controversies than her track record in Mathura. But will her 'dream girl' image help Hema Malini win yet another term?

It is election time. We are very sure of it because the inhabitants of la la land — who are also in the race for the big day — are descending to terra firma and are seen sweating it out — literally. And they are making sure we know about it.

Began my Lok Sabha campaign today with the Govardhan Kshetra where I had the opportunity to interact with women working in the fields. A few fotos  for u of my first day of campaign pic.twitter.com/EH7vYm8Peu

You now know what we mean?

Basanti of Sholay fame — the “Dream Girl” of the nation — was seen working on the fields of Govardhan Kshetra, about 22 kilometres from Mathura — her Lok Sabha constituency. The constituency includes Mathura, Gokul, Vrindavan and Govardhan — touted to be the birthplace of Lord Krishna in Hindu mythology and the region where he grew up. Lord Krishna’s tales recount how he protected the inhabitants of the region from the vile acts of his evil uncle Kamsa, and the wrath of Lord Indra, by ostensibly lifting the Govardhan hill to protect people and cattle from torrential rains.

However, our MP is modest, indeed, down to earth when it comes to her claim to fame.

When asked if she was confident of winning, she claimed to have laboured for her constituency. On being asked to elaborate, she reportedly said, "I can't recognise the work now. I don't remember much."

Her profile of a “lot of work” apparently includes making “many roads and so many other things” that she cannot remember.

Let us help her jog her memory a bit.

Hema Malini was elected as MP of the constituency in 2014.

Two years later, when Mathura was in a bloodbath in 2016, at least 24 people getting killed and 40 injured during clashes between police and squatters in the northern Indian town, Hema Malini was busy shooting for a film for which she was “hoping for an early release.” 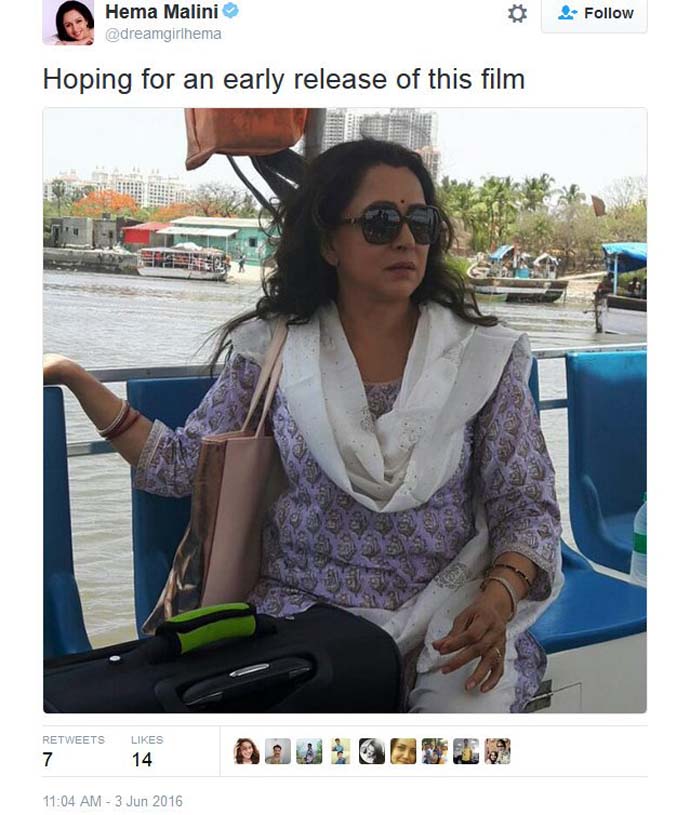 She was shooting for her film Ek Thi Rani Aisi Bhi when people and policemen in her constituency were getting shot. (Source: Screenshot/Twitter @dreamgirlhema)

The tweet was subsequently deleted in apparent damage control and she expressed empathy with the victims in her Lok Sabha constituency. But not before she shot her mouth off to the media, on being asked why she was present at her constituency a day after the incident.

I am an artist, I had already been given dates for the shooting. Yesterday's incident wasn't expected: #Mathura MP Hema Malini

Of course, it is difficult to leave one’s livelihood and rush to manage the “unexpected” situation in one's constituency when a film crew is waiting. We understand, Hema ji.

However, she was dot on duty in August 2007 as a Member of the Rajya Sabha when she posed a question to the then-UPA government. “Whether the government is considering to bring the parts used in manufacturing reverse osmosis-based purifiers at par with finished purifiers at nil rate of excise duty in order to compete with the imported finished products.”

Now, her question could have been interpreted as a concern for the millions of households using RO-based water filters. However, her long association as the brand ambassador of a famous water filter company mirrored her worry for providing “sabse shudh paani (purest water)” to Indian households. It led to questions on whether she was trying to seek answers apparently to benefit a particular company. Being a Basanti in the fields for a photo-op does not cover up non-performance over five years. (Photo: Twitter/ @dreamgirlhema)

Then occurred the incident which showed a callousness towards the people. In 2015, barely a year after she became the Mathura MP, she was headed to Jaipur from her constituency. Her Mercedes was reportedly speeding when it met with an accident involving a Maruti Alto.

Hema Malini was reportedly injured in the accident, with wounds on her forehead and nose.

A four-year-old was killed in the accident. Four others — including the child’s parents and another young child — were grievously injured.

While Hema Malini was rushed to the hospital, medical attention — including being taken to a hospital — for the child and her family reportedly took time.

When it came to expressing her concern, Hema Malini was apparently quick to pin the fault on the grieving father, rather than her own driver. She said that the father of the child — who was still in the hospital recovering from his injuries — should have followed traffic rules.

(Contd) How I wish the girl's father had followed the traffic rules - thn this accident could have been averted & the lil one's life safe!

The unfortunate father’s response was, "I had my indicator on. I saw the road was clear and then took a turn. What traffic rule did I break? Was I speeding? Her car was at 150 plus speed. She is a big name but must at least think before speaking. Instead of blaming me... had my little girl been taken to hospital with Hema Malini she could have been saved now.”

We shall never know who was responsible for the accident, but mending Hema Malini’s attitude certainly is her responsibility.

She has made the most of being associated with the ruling government. In 2016, she was embroiled in allegations that she had allegedly illegally grabbed a plot of land for her dance academy Natyavihar Kalakendra Charity Trust at a nominal price of Rs 70,000 in Mumbai's Andheri area.

The land was reportedly worth over Rs 50 crore.

Even as she was sweating it in the fields now, locals expressed their disappointment by claiming that Hema Malini had not done anything for the development of Mathura.

One local reportedly claimed, "When Hema Malini came to Mathura she directly went to her guest house to take rest despite knowing that people had been waiting for her since long in the scorching heat. She has not done anything for the constituency. How can we vote for her after seeing all this? There is a lack of proper drinking water in the area. Also, there is a lack of toilet facilities in the area despite being a holy place."

While her performance in Parliament has been poor, Hema Malini certainly is not. According to the affidavit filed by her with the poll panel, the value of her assets is worth over Rs 101 crore in 2019. Five years ago, before the 2014 General Elections, her total assets had been valued reportedly at nearly Rs 66 crore.

Hema Malini’s non-performance has been a source of dissatisfaction even among her own party colleagues in the state. Last month, a public rally by UP chief minister Yogi Adityanath and sitting MP Hema Malini in Mathura was among the most poorly attended rallies of the BJP, raising a red flag in the party’s UP unit amidst reported disaffection against Hema Malini being once again given a poll ticket, despite non-performance.

Armed with a sickle in Govardhan, the “Dream Girl” is apparently trying to harvest the fruits of work she hasn't done for the constituency as yet.

Will the land of Lord Krishna grace her with victory this time around too?

Also read: Why Sapna Choudhary should have joined the Congress and challenged Hema Malini