In one of the first opinion poll surveys emerging from the election-bound Himachal Pradesh, India Today Axis-My India poll has put its bet on the opposition BJP.

The results of the just published survey show that the incumbent Congress led by chief minister Virbhadra Singh might be toppled by the BJP in the 68-seat Assembly that's due to hold elections on November 9 this year.

Himachal Pradesh at a glance

BJP will bag about 43-47 seats while Congress will manage only 21-25 seats. Others will get about 0-2 seats, according to the opinion poll. 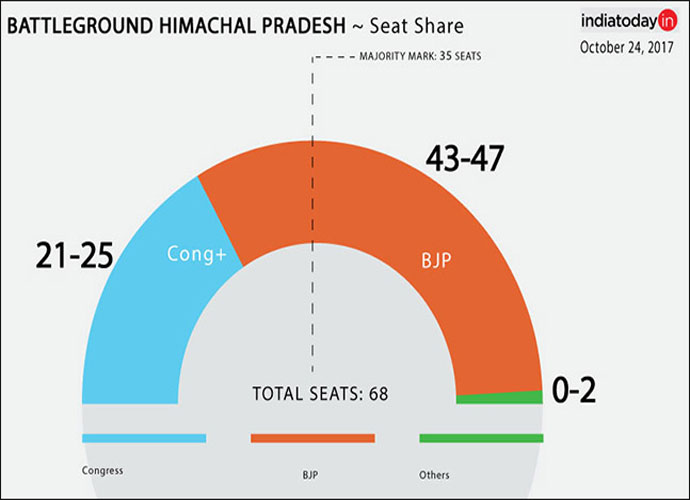 BJP will see significant rise in most major districts, including getting 18 seats in the 25-seat Kangra region, 15 in the 24-seat Mandi region and 12 in the 19-seat Shimla region. The vote share for BJP is likely to be 52 per cent in Kangra, 49 per cent in Mandi and 46 per cent in Shimla.

In Himachal Pradesh, BJP is set to repeat or even outperform its 2007 Assembly election results, when it bagged 41 seats out of 68 in total, while Congress got about 23. However, in 2012, the situation had reversed, with the Congress bagging 36 seats and BJP getting only 26.

Himachal Pradesh has a general category voter base almost 50 per cent, making it the big half chunk of the electorate. Among these, 19 per cent is from the Brahmin/Baniya caste, and 32 per cent from the Kshatriya/Rajput community.

Though BJP is the clear favourite, incumbent CM Virbhadra Singh of the Congress is still the most popular leader, with 31 per cent favouring him over any other candidate.

He's followed by JP Nadda, Union health minister and a potential CM candidate, who's favoured by 24 percent. Former BJP CM Prem Kumar Dhumal is wanted by 16 per cent, former BJP CM Shanta Kumar favoured by 9 per cent while BJP's state president in Himachal Pradesh Satpal Singh Sati is popular among 2 per cent of the electorate.

India Today Axis My India survey canvassed 67 of the 68 Assembly constituencies, with 6936 participants and spanned 13 days of field work.

Also read: Why the Dalit factor matters more than ever in Himachal Assembly polls