Does the order also mean that all married women can divorce husbands when they are forced to leave the parental home at the time of marriage?

What is considered lawful and lawless in India continues to oscillate between the tragic and the ludicrous. Just when you think things can't get any worse, they invariably do.

Yesterday, the Supreme Court, while judging a divorce case, held that a Hindu son can divorce his wife for the cruelty of trying to separate him from his parents.

In all their wisdom, the Bench of Justices Anil R Dave and L Nageshwara Rao wrote (or at least one of them did and the other agreed) that: "It is not a common practice or desirable culture for a Hindu son in India to get separated from his parents on getting married at the instance of the wife, especially when the son is the only earning member in the family. A son, brought up and given education by his parents, has a moral and legal obligation to take care and maintain the parents, when they become old and when they have either no income or have a meagre income."

They also added that a wife wanting her husband to stay separately from his parents is alien to our ethos and culture, a western thought.

It all sounds familiar, of course. So far so good. One hardly expects evolved complexities in such cases. But it is the absence of a parallel thought process that makes this extremely disturbing.

Doesn't a woman, also brought up and given education by her parents, have similar obligations towards them?

What leaves one perplexed about the sanctimonious judgment is the blank space in the wise heads of the judges which ought to be occupied by the ageing parents of a married woman.

Does this judgment also mean that ALL married women can divorce husbands when they are forced to leave the parental home at the time of marriage? (Never mind that some of us, both men and women, move away because we want to travel, work and explore, even though we remain loving offspring).

Would the judges care to inform us who is supposed to care for ageing parents of married women who have no male sibling? And though the judges talked about income and that it is a "pious obligation" of a son to maintain his parents, it is evidently not just about monetary concerns, or else a rule passed about a mandatory monthly cheque being sent to dependent parents would have sufficed. 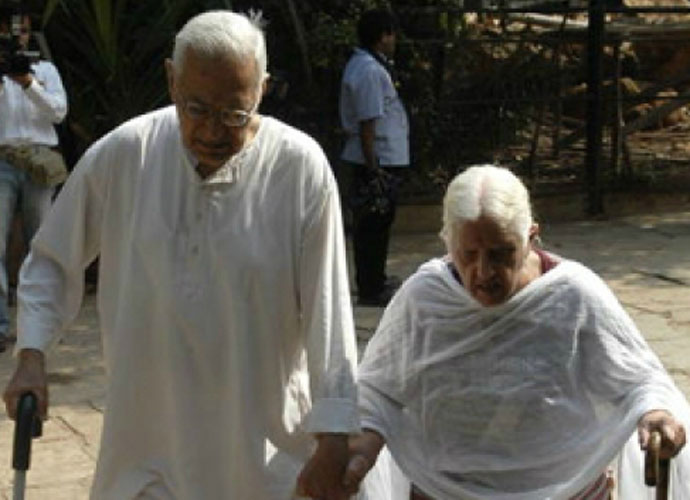 Would the judges care to inform us who is supposed to care for ageing parents of married women who have no male sibling?

It is definitely about a patriarchal mindset which conjures up the desirable picture of a perfect family where the son and daughter-in-law are being dutiful towards ageing parents. Ma baap ki seva sort of dutiful. The major, horrid flaw in the picture being the total absence of the wife's ageing parents.

So how do the keepers of justice explain this absence? Why not the same law for the wife's parents? Is being geographically distant from them, being emotionally not there, not providing for them and not spending time with them western, eastern or non-pious?

Most of us wish to be there for our parents as they grow older and more vulnerable. Illnesses begin to visit them more often, our anxiety about them escalates more frequently and we feel they deserve our attention more than ever before.

How a married couple balances these concerns depends on whether their relationship is one of mutual understanding and respect or of manipulation, power and control.

Surely an adult couple should be left to sort out these kind of important life decisions between themselves without the precious "Hindu son" being awarded special status over his wife by the law! Or else perhaps the wife should just tell him and the law to take a walk!

These harmful social attitudes are not surprising or new. It is just very sad and pathetic when they are given the formality of laws by court!

I am obviously not for a moment advocating the desertion of the elderly, the ill or the needy.

But it is disheartening to realise that we have lawmakers who fail to frame laws that protect and care for not only the parents of a couple equally, but are also broad and inclusive enough of the childless and poor elderly people in the community.

Instead, they firmly stick to Hindi television serial mindsets, with the virtuous bahu firmly in place. It is quite an ambitious and sterling failure on their part, revealing hypocrisy behind all the jibber-jabber of woman empowerment.

#Elderly, #Supreme Court
The views and opinions expressed in this article are those of the authors and do not necessarily reflect the official policy or position of DailyO.in or the India Today Group. The writers are solely responsible for any claims arising out of the contents of this article.

Rupa Bajwa is an award-winning novelist, reviewer and columnist. Recipient of the Sahitya Akademi award among several others, currently she is working on her third novel.