The Daily Beast was wrong to call all Hindus rapists

Article on American portal fails to acknowledge misogynistic verses are hardly unique to the faith.

In India, a woman is raped every 15 minutes. Every two minutes, a woman in India is a victim of a crime. The country ranks worst among the G20 countries when it comes to women's rights.

Clearly, India needs to do more to improve the situation of women, not only in preventing crimes, but also in fighting gender-specific abortions, for access to education, proper healthcare, et al. So what exactly is holding India back?

A recent Daily Beast article purports to have the explanation: Hinduism and other Indian religions. By selectively quoting a few verses from a Hindu scripture and citing some Hindu tales, the writer comes to the conclusion that Hinduism and Hindutva are to blame. Besides making the mistake of conflating Hindutva for Hinduism, the writer even misinterprets Hinduism as well as the role of religion.

Also read - Calling India 'Rapeistan' is doing it a favour

There are many problematic aspects to the article. The author disturbingly whitewashes America's own unique form of rape culture by claiming that in the United States, "on appalling issues like rape, one is in fact guilty until proven innocent".

Patriarchy is still very much alive in America; rape victims must still face the humiliation of victim-blaming, with some organisations even estimating that nearly 98 per cent of rapists (including estimates of unreported rape) will never spend a day in jail.

College students who are raped on campus (an estimated one in five in the US) not only have to deal with the horrendous crime, but also the uncaring, unsupportive administration that some have reported as being worse than rape. This is a very serious problem, yet the article would suggest that this is how "normal societies" operate. Not only does this demonise other countries, but completely diminishes the real struggles that women face in Western societies.

Patriarchy and the issues suppressing women remain a malaise around the globe. Yet can Hinduism be the sole reason for India's unique women problem in comparison with other countries?

Also read - Our morals don't need policing but our streets do

Besides having a billion people, a surplus of men, and being located in Asia, what do India and China have in common? The ethnic and religious make-up of the two countries is drastically different, their cultures dissimilar, and their governmental systems scarcely alike.

Other than a few commonalities, it's like comparing apples with oranges. Countries that are more comparable to India reveal similar levels of violence against women. Despite being Muslim-dominated countries, you will still find horrific stories of rape in both Pakistan and Bangladesh.

A UN survey on Bangladesh found that half of the men who were interviewed had committed an act of physical violence against women. Lest you believe that South Asian culture is uniquely awful towards women, the same survey found similar levels of violence (and in some cases, rape) in other diverse Asian countries. Once you widen the data pool, the case for Hinduism as a driving force for rape becomes considerably weaker.

Are rape and misogyny unique to Hinduism? Hardly. In Deuteronomy 22, verses depict raped women being married to their rapists and raped women being stoned to death, depending on the circumstances. This doesn't exactly inspire confidence that the Bible quotes that women will be treated equally.

At other points in the Bible, God commands his followers to rape. As per the author's logic, when God, or one of his holy prophets, orders rape as a punishment, the assault is justified for Christians and Jews. Similar verses will be found in the Quran, or any other faith for that matter. Are verses encouraging rape and misogyny unique to Indian faiths? No.

Another major issue with the Daily Beast article is that it fundamentally misunderstands the nature of Hinduism. Too often commentators approach Hinduism like it is an Abrahamic faith (like Christianity or Islam). As it is, some commentators have trouble understanding another Abrahamic faith (Islam), but somehow believe that they can examine Hinduism with the same lens.

Also read - Rape in the Bible

For starters, scripture does not play the same role as it does in Abrahamic faiths. In the modern Hindu practice, there is no real equivalent to the Quran or the Bible. Although many Hindus hold the Vedas or the Bhagavad Gita in high regard, they do not play an equivalent central role. Indeed, many Hindus, if they read the Vedas, might be confused by the different approach it takes to the faith, or the rather different gods and goddesses it discusses. Even these texts are rejected by some Hindus. One of the most important Hindu tales, the story of the God-King Rama, has up to 300 different versions of the narrative. The mythology that goes into each deity differs greatly from region to region. 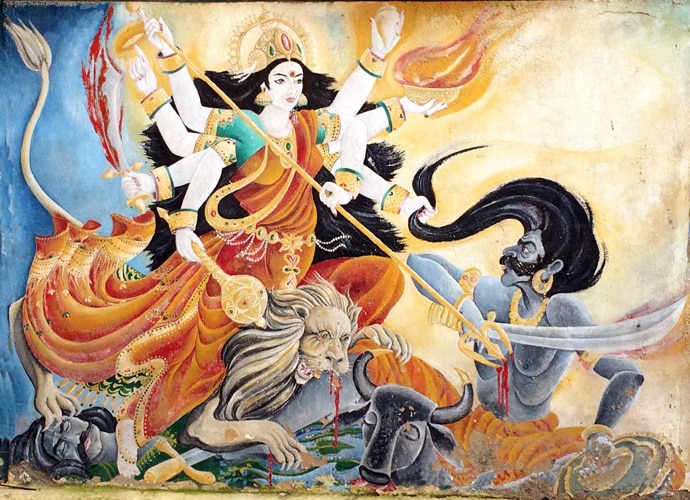 Among some of the tribals of India, there are those who view Durga as the oppressor.

A particularly demonstrative example of this has recently caused a debate in India.

One of the most widely worshipped goddesses, Durga, slayed the demon Mahishasura. Unsurprisingly, some have seen this as a feminist tale, the Goddess slaying a symbol of patriarchy. Yet, in some tribal regions of India, there are those who view Durga as the oppressor, part of a conspiracy hatched to kill Mahishasura, a great warrior who inspired jealousy among the gods.

Also read - Why Lord Ram is no ladies man

Despite these vast differences and complexities within the same religion's mythology and practices, and its contrast to the Abrahamic faiths, the Daily Beast article would have us believe that the religion has equal acceptance of the listed verses, and that all Hindus believe in the same thing.

Perhaps, one of the more problematic arguments in the article was the conflation of Hinduism and Hindutva.

Hindutva, or Hindu nationalism, is a political ideology, not the faith itself. While Hindutvawadis are Hindu, not all Hindus are Hindutvawadis. It is a sad fact that many Hindutva organisations denigrate women and use the religion to enforce patriarchy. This is indeed a deplorable fact that needs to be discussed. The author does not do that. Instead, the author simplifies the rape crisis: some Hindu tales and scriptures encourage misogyny. Hindu nationalists are Hindus. Therefore, Hindutva is Hinduism, and they support rape.

Also read - 8 most controversial quotes from Wendy Doniger's The Hindus

It is an unfortunate fact that many organisations and people, from the Muslim Personal Law Board to the Malayali-Christian singer Yesudas, have played a part in sexism in India in recent times. However, religion has been used conversely, to fight sexism and to challenge authority. Even within the history of India's Hindu community, there have been those that have used religion to oppress women, as well as those who have used religion to uplift women. Unfortunately, sexism is widespread in Indian society.

Yet arguments that solely focus on one religion as the primary cause of societal ills do not only target Hinduism. Islamic scriptures too are often blamed as the root cause of terrorism and various other problems in the Middle East, despite the complicated and diverse reality.

While it makes for popular articles and books, such commentary does little to advance our understanding of the issue. Religion is complicated. It can work to enforce patriarchy, while also providing the tools to dismantle it. It can justify violence for terrorist organisations, as well as it can foster peace among their opponents.

Religious societies around the world, despite taking influence from the same source, can end up with a unique structure for society. At the end of the day, blaming a religion might be attractive as an easy explanation when examining a subject, but it leads to poor analysis.

#Sexism, #Religion, #Rape, #Hinduism
The views and opinions expressed in this article are those of the authors and do not necessarily reflect the official policy or position of DailyO.in or the India Today Group. The writers are solely responsible for any claims arising out of the contents of this article.

The writer is a masters candidate at the Elliott School of International Affairs at George Washington University.