Turning temples into courts: Prejudice against Hinduism on the rise

Political activists should not be allowed to use religious places for political agitation.

Visiting Hindu temples is an amazing experience, an inner journey through history, culture and cosmic dimensions. Each temple is profoundly unique with its own identity. Such temples represent one of the most important cultural heritages of all humanity.

As a Western-Hindu visiting Hindu temples for several decades, each temple has been a transformative event in sacred time and space.

Unfortunately, there are a few temples where as a Westerner I have been unable to enter. Having an Arya Samaj certificate of conversion to Hinduism does help, but is not always enough. Yet there are many Hindu temples that let everyone in. Often we are taken to the front of long queues in respect of having come so far in our pilgrimage.

Also read - Hinduism is dead. Shut the temples down

Some complain that there are not enough Hindu women priests, though that situation is improving, or that women cannot enter certain temples, though they can get into most. These are areas of genuine concern. Hindu dharma honours Shakti and this should extend into the society overall.

Yet my wife, who is an Indian and a Hindu religious teacher, always receives special respect at any temple she visits, often from the head pujari, even at temples that I am not able to enter. But she approaches temples with genuine heartfelt devotion, not as an angry activist.

I know something of history, how thousands of Hindu temples were destroyed by Islamic invaders, and how the British belittled Hinduism. I can sympathise with temples that do not want non-Hindus to enter as mere tourist sites. Temples, just as churches, have dress and codes of conduct that should be followed and security concerns in this age of terrorism.

It is sad to see temple entry in India being made into a political football. It is strange to see the Indian judiciary ruling on who can go into temples and how far, as if temples should be under court jurisdiction.

This is compounded by the fact that churches and mosques in India are exempt from such interference and regulation. In addition, temple revenues are taken by state governments for their own usage, while church and mosques receive state subsidies. 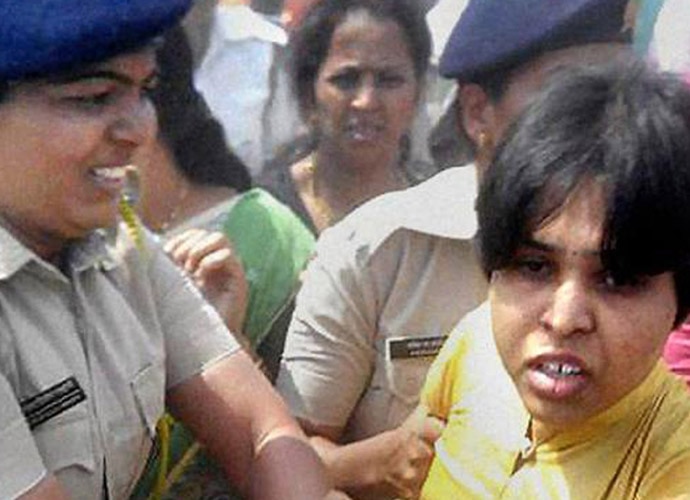 Clearly, there is a tremendous prejudice against the majority religion in India that is unparalleled in any country. In other countries majority religions are treated as well or better than minority religions. In Islamic states like Pakistan and Bangladesh, Islam is given precedence and prestige over all other religions.

In the secular USA, there is a strict separation of church and state, and the judiciary does not rule on church practises. On the contrary, the government grants extensive and equal tax benefits to all approved religious groups, with majority Christianity granted the most regard.

Going into temples should be an act of devotion, not of political assertion. Allowing political activists into the sanctum sanctorum of temples can be a gross violation of religious respect. That is an area of the temple reserved for the priests, not for the general public.

There are Hindu temples and festivals for men or women only. There is nothing wrong with this, any more than gyms or clinics that cater to male or female only concerns. There is a strict separation of men and women in certain temples. That is also fine and creates a different type of energy than the free mingling of the sexes.

Hindu temples have a vast array of deity forms and worship at special times and in distinctive ways. There is no single standard church service or namaz. Such local variations of practise should be honoured and preserved. They reflect the richness of Indian civilisation.

Judges should not dictate religious practises. Political activists should not be allowed to use temples for political agitation.

At the same time, temple entry policy should be respectful of different types of devotees in terms of age, sex or ethnicity - but this can be done without destroying the sanctity of the temple or curtailing the myriad forms of temple worship.

#Supreme Court, #Hinduism, #Trupti Desai, #Right to pray
The views and opinions expressed in this article are those of the authors and do not necessarily reflect the official policy or position of DailyO.in or the India Today Group. The writers are solely responsible for any claims arising out of the contents of this article.