How textbooks are being used to introduce a new 'past perfect' and 'future tense' for young Indians.

History is generally assumed to be based on facts and available information. However, it is undeniable that much of history is “interpretive” – a narrative based on who is wielding the pen. Winston Churchill is famously credited with saying: “History is written by the victors”, which does ring true; it is the victors who usually determine the version of truth that gets propagated.

However, a significant addendum to Churchill’s adage should be that history is also often rewritten by those in power. Was Winston right - is history written by the victors? Yes. Quite literally...

This is a very dangerous proposition – particularly when it happens in the context of education at any level. History is a subject taught universally across educational institutions and it lends itself well as a powerful weapon for indoctrination. It enables those in power to subtly condition a very impressionable section of the citizenry – children and young adults – into looking more favourably at ideologies they want to disseminate. There are probably no other avenues that exist in society with as wide a reach as educational textbooks to work as propaganda machines.

In a survey conducted in 2016, some shocking revelations came to light about how the British perceived their imperial past – more than four in ten Britons regarded the British Empire as wholly positive and believed their colonial history was something to be proud of!

Leading educationists from Britain ascribe this “selective amnesia” almost solely to the manner in which the Empire is projected within the educational curriculum at all levels. There is an innate unwillingness to acknowledge the darker aspects of Britain’s colonial past – those of deep-rooted exploitation, intense racism, violence and atrocities. This unwillingness manifests itself through the glossing over of facts in British classrooms. Not only does it rob students of the opportunity to form a holistic idea of themselves and their nation, it also leaves them ill-prepared to deal with how people from other countries regard British history.

The intent of this is obvious – re-position the narrative to suit contemporary Brions, freeing them of the baggage of the past. Britain is only one example of the teaching of history becoming subservient to hidden agendas. Chinese schools similarly project Mao in a decidedly positive light, paying little heed to his totalitarian approach or inhuman policies. Schools in America barely scrape the surface about the history of African Americans.

Yet, India had been somewhat immune to these manipulations since Independence.

That is, until recently.

In the last few years, there has been a persistent endeavour to rewrite aspects of India’s history. The attempt has been led largely by extremist Hindutva forces. The objectives seem to be multi-fold and would worry any free-thinking individual.

For those of us who grew up in a more logical India, some of these altered textbooks would beggar disbelief. Let me focus on a textbook I came across recently – specifically the chapter on “Modern India’s Freedom Struggle” in the class XII history textbook of the Rajasthan Education Board (Pages 106-143).

What’s glaring in it is not just what it says – but what it omits to say. There is a methodical evasion of the role played by leaders like Jawaharlal Nehru – and even Sardar Vallabhbhai Patel. They do show up as side characters here and there, but the spotlight is decidedly turned away from the likes of Nehru. 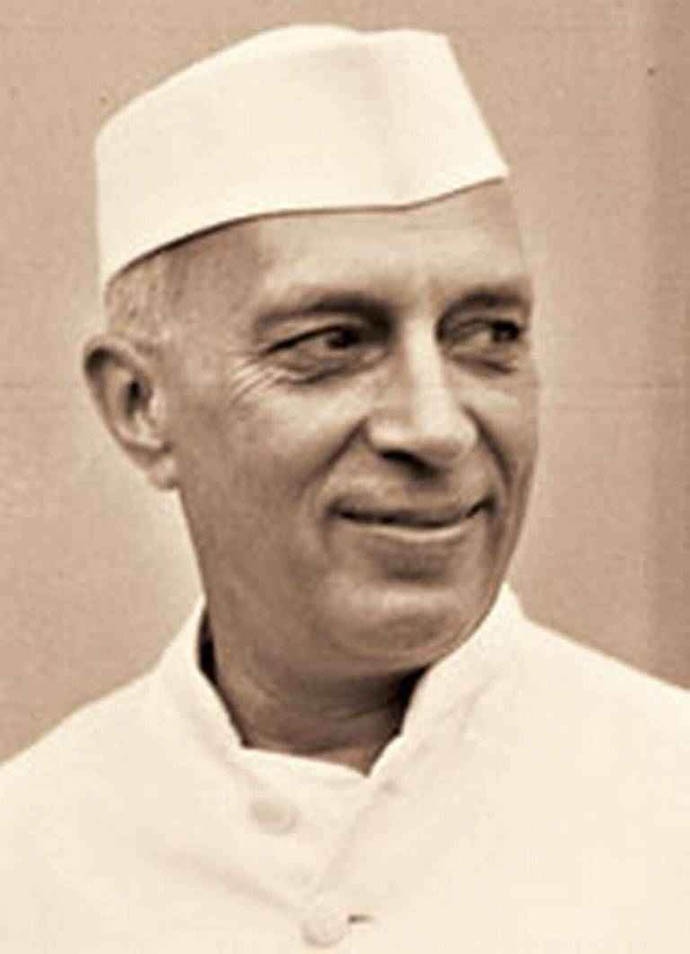 Smiling, but till when? There appears to be a methodical evasion in textbooks of the role played by leaders like Jawaharlal Nehru

There are biographical paragraphs about many leaders who played various parts throughout the freedom struggle (eg. Bhagat Singh, Chandrashekhar Azad, Bose, Tilak, Gandhi, and of course, Veer Savarkar whose birth anniversary is being observed) – but there is no mention of Nehru’s specific role. There are biographical paragraphs about many leaders, including Veer Savarkar

Whatever one’s thoughts may be on Nehru’s legacy, even his harshest critics would be hard-pressed to justify negating his role during the freedom struggle.

But even Gandhi is mentioned for the most part in an almost passing manner – he is not once hailed as a patriotic leader who made great sacrifices for India – adjectives used for Savarkar liberally. 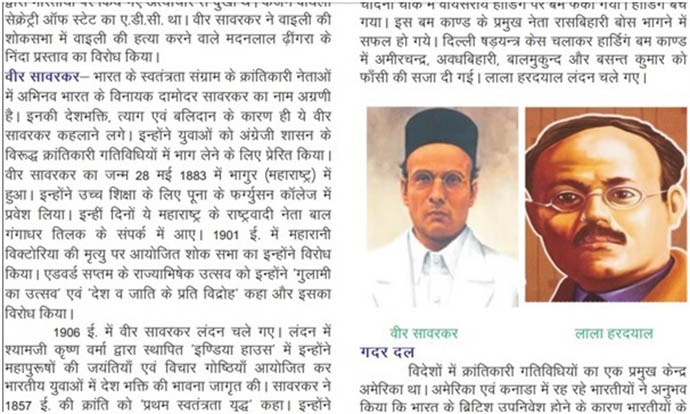 The alteration of historical events goes further in a few cases. In one instance this is done by downright misstating actual recorded facts, with asserting, for example, that Maharana Pratap defeated Akbar at the battle of Haldighati. You choose who won: Some history books even assert that Maharana Pratap defeated Akbar at the battle of Haldighati (1576).

It doesn’t stop at existing textbooks like these. Dinanath Batra, associated with the Rashtriya Swayamsevak Sangh (RSS), has repeatedly written to NCERT demanding further changes across the curriculum. He claims these changes would make the textbooks less “biased”. Some of these changes that Batra deems required reportedly include a removal of a reference to the apology by former PM Manmohan Singh on the 1984 Sikh riots, portions linking the rise of the BJP with the Ram Mandir episode, removing references to the number of Muslims killed in the 2002 Gujarat riots, etc. In order to build up the aura of Indian rulers, from a predominantly Hindu background (eg Shivaji and Maharana Pratap), there is more focus on them. This by itself is not a problem – there is no argument against learning more about some historical personalities. Unfortunately though, the recommendations propose this at the cost of significantly diminishing references to the Mughal era.

A Class VII history textbook from the Maharashtra Board has already implemented some of these changes, by reportedly expunging parts about rulers like Razia Sultana and Muhammad bin Tughlaq. Attempts at indoctrination take this a step further by recommending the removal of historical instances that cast a positive light on India’s Muslim rulers. Some lines that have reportedly been identified for removal from class seven NCERT history textbooks include:

“The (Mughal) rulers had an extremely liberal policy towards people… All Mughal rulers gave grants for construction and maintenance of places of worship… Even when the temples were destroyed during battles, grants for their repair work were released later.”

The pattern is clear.

Such opportunistic subversion of facts is something all of us should be wary of, for these could reek of attempts to subvert young minds. These students are going to be tomorrow’s citizens and voters. The repercussion thus is not limited to them having a twisted view of their country’s history. It would also impact how they perceive their future as well.

Post your comment
#Nehru, #Veer Savarkar, #Hindutva, #RSS
The views and opinions expressed in this article are those of the authors and do not necessarily reflect the official policy or position of DailyO.in or the India Today Group. The writers are solely responsible for any claims arising out of the contents of this article.

The author is a senior executive in a global analytics firm and the President of All India Professionals Congress, Delhi (South)