The Simpsons censored in Hong Kong: What happened at Tiananmen Square in 1989?

Disney+ recently released The Simpsons in Hong Kong, but without a critical episode. What was the episode about and why has it been censored?

Disney+ recently released The Simpsons in Hong Kong, but with an episode missing. Loved for its witty humour and satire, The Simpsons regularly takes digs at outrageous laws and events around the world. True to its nature, it did the same at China's censorship laws on March 13, 2005. Season 16 Episode 12, which was titled Goo Goo Gai Pan featured the Simpsons family (Homer, Marge, Bart, Lisa, Maggie) traveling to China to adopt a baby, and due to its jokes, the episode is now unavailabe to watch in Hong Kong.

Disney has allegedly removed one episode of The Simpsons from the Hong Kong edition of Disney+, which described the family’s visit to Beijing and carried this famous scene. Via @StandNewsHK https://t.co/PAs1SdoxEk pic.twitter.com/VwXiFHADAK

In the episode, the Simpsons family, along with Selma Bouvier (Marge's older sister), travel to China to adopt a baby after American doctors tell Selma that she has hit menopause. Seeing Selma upset about losing the ability to have children and her fear of growing old alone, Lisa suggests that she adopt a child from China. When they reach China, Homer calls the mummified body of Mao Zedong a "little angel who killed 50 million people". The family also visits Tiananmen Square where a sign reads: "On this site, in 1989, nothing happened" - a subtle dig at China's censorship laws. 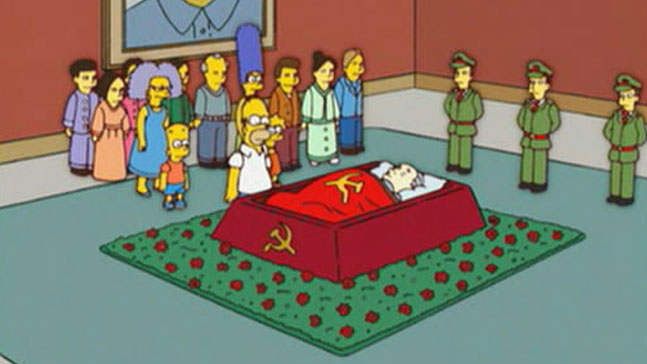 A still from the episode. Photo: The Simpsons

WHAT HAPPENED: The show cracked not-so-overt jokes on Mao Zedong and the Tiananmen Square because of the student-led protests that took place in the mid-1980s. During this decade, the ruling Communist Party had begun to allow a few private companies and foreign investment into the country. Along with a boost to the economy, the decision brought corruption, but also hope for more political openess in the country.

This led to a divide within the Communist Party, into those impulsively wanting rapid change, and 'hardliners' wanting to maintain strict state control over all aspects of the country. This divide ultimately resulted in student-led protests which reached their peak with the death of a leading politician, Hu Yaobang.

Tens of thousands of people came together for Hu's funeral in April 1989, and demanded greater freedom of speech and less censorship. The hardlines announced martial law in the last two weeks of May in Beijing. On June 3-4, estimatedly a million protesters gathered at the Tiananmen Square and troops began to open fire, crush and arrest protesters to regain control of the area. The Chinese government said that 200 people had died, but people suspect that the actual deaths were around 10,000. On June 5, a man holding two shopping bags was photographed blocking a line of tanks heading away from the square. No one knows what happened to him and he is now known as 'Tank Man'. This image then became the defining image of the Tiananmen protests. The Chinese government has banned all information on the massacre. Mao Zedong was the founding father of the People's Republic of China. He had led China through its Cultural Revolution, following a devastating famine that resulted in the death of millions of people.

WHY NOW: Up until now, Hong Kong boasted of its artistic and political freedoms compared to mainland China. But after the violent democracy protests two years ago, authorities have begun censoring art. The Guardian reported that 'censors have since ordered directors to make cuts and refused permission for some films to be shown to the public'.

Hong Kong’s Beijing-appointed leader, Carrie Lam, vowed this month to “proactively plug loopholes” in the city’s internet and introduce “fake news” regulations. Her vow has raised concerns that China's 'Great Firewall' is now being extended to Hong Kong too. BBC reported, "Book publishers in Hong Kong have admitted to self-censoring and the largest pro-democracy paper, Apple Daily, closed earlier this year amid a national security investigation."

Disney+ has made no comment on The Simpsons episode, and so far it is unclear whether it has been censored by authorities or the company itself.

In case you want to see why Hong Kong is up in arms against the episode, you can watch Season 16 Episode 12 here, on Disney+Hotstar in India.

#Tiananmen Square, #Censorship, #Hong Kong, #Thesimpsons
The views and opinions expressed in this article are those of the authors and do not necessarily reflect the official policy or position of DailyO.in or the India Today Group. The writers are solely responsible for any claims arising out of the contents of this article.