How media made a legend out of Burhan Wani

When an ordinary village lad who smartly used social media is made a hero, it is not surprising that youth will try to emulate him.

The media also builds "super militants", because they need to carry forward the story of a region with a built-in narrative of conflict and militancy.

Everybody loves a good insurgency. It has been seen in Kashmir, Manipur and other parts of India that have been hit by political defiance.

The media, admittedly, is an unwitting partner in this game. Unsuspecting, but hugely important. The 24x7 churn machine of the media needs a great story to grab eyeballs.

The media inadvertently built the legend of Burhan Wani. Courtesy his social media forays with regular videos and glamorous photographs, a nondescript village lad from Tral was made into the harbinger of "new militancy" in Kashmir.

For reference, read the Hindustan Times report on July 9, after Burhan was killed.

HT was not the only media house to follow this narrative. The reporting of almost all media houses on Kashmir, whether electronic, print or digital, ran the same script.

For all Burhan's social media activity I don't recall any militancy incident attributed to him while I was in office. Not sure after that.

Aftr many yrs I hear slogans for "Azadi" resonate from the mosque in my uptown Srinagar locality. Kashmir's disaffected got a new icon y'day

Alas Burhan isn't the 1st to pick up the gun & won't be the last. @JKNC_ has always maintained that a political problem needs pol. solution

Omar is patiently waiting to be the next chief minister of J&K again. He neither supported Burhan’s killing, nor criticised it. While J&K CM Mehbooba Mufti maintained a studied silence following Burhan’s killing, Omar Abdullah stole the media spotlight.

The fact is that Burhan was never involved in any shootout or any significant attack on security forces from the time he joined militancy in 2010 at the age of 15, till July 9, 2016, when he was killed.

So, why did the media label Burhan as the face, and icon, of Kashmir militancy?

Before Wani, most militants in Kashmir kept their faces covered and operated clandestinely, in the shroud of secrecy. They were never known widely among people, except for the grainy photographs and names released by security forces after they were killed.

This young man, with a glowing face and striking good looks, shed the mask. Dressed in combat uniform, and armed with assault rifles, he posted photographs and videos on social media, urging youth to join him. 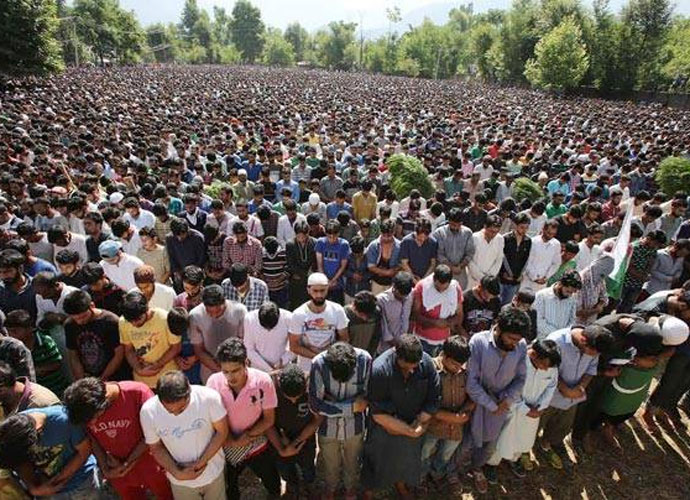 Burhan glamorised militancy and the media loves glamour. It lapped up the image. The handsome young man was hailed as the new face of Kashmiri militancy.

With the media building up the Burhan story, Kashmiri Muslims grabbed the media construct with equal gusto. Burhan, elevated as the local commander of Hizbul Mujahideen, was built up as the super militant.

"Yesterday,he was romanticized, cheered, lionized and was celebrated by them. Once his associates started getting killed, a few even wondered if he was "being run by agencies". Today, they mourn his death, confer him with the title of Shaheed.

Later on, they will ensure that their children don't miss their school bus, and over the weekend, they will take families out for picnic to ‪Pahalgam and‪ Gulmarg.

The truth is, despite all his virtual bravado, despite being a poster boy, he could not carry out a single action against security forces.

His life ‪‎glamorized by ‪‎media power, and his death celebrated in same way...by people who just stand on sidelines, and cheer gleefully.

Let ‪truth be told, his life was a ‪waste... one more man sacrificed for a ‪futile cause... he is not the first, he wont be the last!!"

SSP Baramullah Imtiaz Hussain is the man who wears the uniform of Indian Police Services, and is committed to eliminate insurgency from his motherland.

The insurgency kept alive by diverse forces both on this and the other side of the border.

The Indian media is merrily singing the same tune as Syed Salahuddin, chief of United Jihad Council (UJC), the conglomerate of militant organisations.

In a statement issued to Kashmir media, Salahuddin said, "Wani not only gave sleepless nights to eight lakh Indian armed forces and their supporters but also gave a new lease of life Kashmir freedom struggle."

Read the Hindustan Times report on his killing:

"The rise of Burhan Wani, the Hizbul Mujahideen commander gunned down by security forces on Friday, coincided with the return of numerous Kashmiri youngsters to the militant fold after more than a decade.”

Mark the word "numerous". A heavy word, frightening in its implications where militancy is concerned.

Burhan was called the "driving force" for the youth to join militancy in Kashmir.

Now please study the statistics. This is the data available with the Ministry of Home Affairs (MHA), as reported in The Indian Express on July 4.

The MHA data also reveals that from January to June 1, 2016, 36 militants were able to successfully infiltrate into India.

For 2015, the number of successful militant infiltrations stood at 33. For 2014, the corresponding figure was 65.

With these ridiculously low numbers, the media is building up the story of the new wave of armed militancy in Kashmir.

According to reputed and trusted Indian media houses, less than a 100 militants will terrorise the Indian armed forces, and energise the whole of Kashmir to rise against India.

Going by media analysis, is this the monster of Kashmir militancy that India should be afraid of?

No mention is made of the thousands of Kashmiri youth moving to mainland India every year for higher education, or getting absorbed in the Indian job market on the strength of their qualifications and skills.

Is this an informed analysis by reputed media houses of the country? Or scripted reporting and fear-mongering, where ground-level figures are not seen for what they are.

"Burhan defeated death on several occasions and he showed that a handful of believers of Almighty can break the pride and arrogance of mighty power. Under the banner of Hizbul Mujhadeen, Burhan Wani produced scores of Burhan’s and every drop of his blood will continue to produce thousands of Burhans in Kashmir Valley."

Why is the media carrying forward the work of the UJC chief and building up a narrative of fear?

Note the report in The Indian Express on July 9. Almost all media houses have followed the same script.

"Given the ferment in the Valley, this watershed in the new phase of militancy may set off a new, more volatile phase."

The Indian Express quotes a police officer in south Kashmir in this report:

"The decision to bump off Burhan had already been taken. There was a view within the establishment against killing him. That wasn’t heeded. I have no doubt that his killing will create a lot of rage among youngsters and substantially increase local militant recruitments than if he was arrested. What Burhan started won’t end after his death, it may get a fresh life with his death."

If there was one thing that Burhan mastered brilliantly, it was marketing himself. In his videos and selfies, you see a handsome Kashmiri Muslim, dressed in combat fatigues, assault rifles placed menacingly around him.

When an ordinary village lad who smartly used social media is built up as a hero, it is not surprising that youth with the same profile will try to emulate him.

Burhan Wani is the product of diverse powers - both in India and Pakistan - who don't to see the Kashmir issue resolved.

It is these powers that play with people at the level of Burhan Wani. The separatists also work on a given script. A whole media narrative is built, and Kashmir is kept on the boil.

Burhan’s family profile is another favourite story of the media.

His legend was built – that he comes from a highly-educated family. There were multiple reports that he plunged into violence following the "humiliation'"faced by his brother at the hands of security forces.

The narrative is that despite his sterling family credentials, this "brilliant" Kashmir youth was driven to militancy. The media constantly spoke of his father, who retired as a school principal, and his mother, who is a post-graduate.

No mention is made of the extreme Islamic radicalisation of this family, of which Burhan Wani was a product.

This radicalisation is evident in the interview of Burhan Wani’s father Muzaffar Ahmad Wani before the militant was killed.

"Yes, it’s very hard (fighting the Indian Army). Everyone knows it. It is a hard task, but a Muslim has his faith in God. He knows if he dies in the path of God, he goes to God. In our religion, whosoever dies because of the oppression from India, or by an Indian bullet, doesn’t die. He goes from this world to the other world (as promised in the Quran); there will be no disease in that world, no oppression. This is what our Islam tells. That’s why Muslims don’t fear that. We prefer dying with honour rather than living a life of shame under oppression.

Yes, I do get a bit disturbed (that Burhan may be killed by the security forces soon). But our Islam says that God, Quran and the Prophet are bigger than anything, even bigger and more important than our sons. It’s not the other way round. If our God is not happy with us then we don’t need our sons. Our God should be happy with us even if my son’s or my sacrifice is needed for that."

An audio clip being circulated in Kashmir. It is is supposed to be the voice of Burhan’s mother at his funeral. She shouts, "Tum kitne Burhan maaroge." The crowd responds, "Har gar se Burhan niklega."

Then the crowd takes over:

The slogans of "Jeeve Pakistan" reveal the truth of a movement that is supposed to be Kashmir’s fight for "azadi". This is Pakistan’s proxy war against India.

The tragedy is that many influential powers on our side are helping Pakistan in this war.

#Militancy, #Kashmir, #Burhan Wani
The views and opinions expressed in this article are those of the authors and do not necessarily reflect the official policy or position of DailyO.in or the India Today Group. The writers are solely responsible for any claims arising out of the contents of this article.