How the Rajasthan government is throwing children out of school

By "merging" 17,000 government schools into Adarsh schools, the Raje regime has forced students to drop out, besides providing a boost to private schools.

The Vasundhara Raje government in Rajasthan recently closed 17,000 government schools across the state (August 2014). Technically the schools have not been “closed” but “merged” into nearby “Adarsh” schools in what is called school rationalisation; however the manner in which this exercise has been done has pushed many students into private schools they can ill-afford or worse drop out of school altogether.

School rationalisation is an idea with merit. Across the country, there are primary schools with fewer teachers than the number of classes in the school. There are also instances of schools with very low student enrolment due to the Sarva Shiksha Abhiyan/Right to Education norms of at least one primary school within a 1km radius. At the same time, there are schools with excess teachers due to political pressures which have nothing to do with education. Therefore, if schools along with associated teachers and students were mapped out and then “rationalised” in a decentralised exercise involving teachers and students/parents - using student-teacher ratio, distance, connectivity, school infrastructure etc as criteria - it could lead to much better utilisation of resources and improved education for students. However, the Rajasthan experience shows how a good idea can be thwarted by sheer administrative callousness – with tragic outcomes for children already on the margins of our society.

I visited schools in two blocks of Jaipur district to understand the impact on the ground. The expectation was that Jaipur being the state capital would be one of the best implemented districts as compared to other poorer districts on the border. I also spoke with teachers, students, parents and some administrative officers off the record.  In both blocks – Sanganer and Amber - of the schools that I visited at random, the story that emerged was disheartening. The transfer ratio of students from merged school to “Adarsh” school was uniformly low – immediately indicting the whole exercise. On paper, 100 per cent of the students have been automatically enrolled in the “Adarsh” school, but based on conversations with the teachers, I found that very few are actually coming to school. A school with no students, in Kharda ki Dhani

The example of “Kankwali ki Dhani” Adarsh primary school in Amer block in which two primary schools - Jagannathpura Bid and Jagannath Pura - were merged is revealing. Not a single student from either of the two schools attended the Adarsh school – simply because it was too far. Some students from these two schools instead enrolled into Government school in the adjacent village, Luniawas – because that school was much nearer. Others – mostly smaller kids dropped out. I looked at the attendance record of the ten Class 4 and 5 students who did go to Luniawas: a paltry ten days on average in almost two months. Parents of both closed schools protested and the merger was nullified. All students in both schools returned immediately to resume studying but lost a full two months of coursework in the meanwhile.

Similarly, in Sanganer block, Aamli ki dhani school was merged into the Badwani primary school. Of the 18 students enrolled, only nine transferred. To come to this Adarsh school, the students would have to cut through a field, permission for which was refused by the owner or take a detour too long and busy for the younger students. Plus some OBC kids from the closed school did not want to study in the new Adarsh school because of the caste composition of its students. The more affluent ones enrolled in private schools; others dropped out. School after school that I visited revealed the same problem – of schools having been merged without consideration of actual distances, traffic involved. No school had infrastructure adequate to accommodate all students and classes were being conducted in make-shift surroundings. The teacher in Nimdi ki Dhani leaves a notice telling students that he won't be coming to school. The school remained closed.

These examples reveal the absurdity of the exercise when done remotely without field visits or consultations. For instance, had either the parents or the teachers been consulted, they would have informed that despite being another village, the school in Luniawas was closer than the Adarsh school in the same village. Another farcical outcome of this insulated exercise was evident in Sanganer block, where I found two schools (Kharda ki Dhani and Nimdi ki Dhani) which escaped closure in this exercise. Only the schools have no students but five teachers! When I visited these schools during school hours, both schools were closed with a notice in one school informing that one teacher was absent while the other had to suddenly leave for important work. 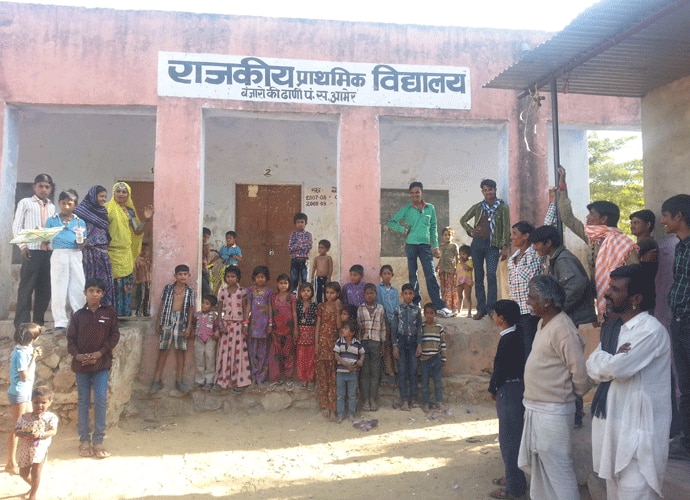 Out of school children in Banjaro ki Dhani

However the most tragic situation was when I visited the school in “Banjaro ki Dhani” in Amber.  The name itself alerts one to the desperate circumstances of the children there (Banjaras are categorized as a “Special Backward Class”) yet this school too has been closed in this exercise. As I neared the hamlet, the first sight was of four small children carting plastic bottles – children who had one time gone to school but had dropped out. As I spoke with these little children asking them about their school, another kid on a bicycle came to boast that he went to a private school and “yeh log to kooda chugte hai” (sort trash). Their little faces shrinking even more, the children walked away despite my entreaties to buy them candy from the nearby store. This school had 34 children (24 regular) enrolled from Banjara, Bhil and Bawaria community; only three students went to the Adarsh school. Almost all others dropped out. I lined up some of the children who were around that time – all of whom were out of school now – in front of the school now closed. A snapshot of little children who have been literally shut out of school, denied education and prospect of a better life. When I went to speak with their teachers in the new school, one teacher was adamant that even if the school were to be reopened, she’d have nothing to do with it because of the apparent lack of support offered by the community. 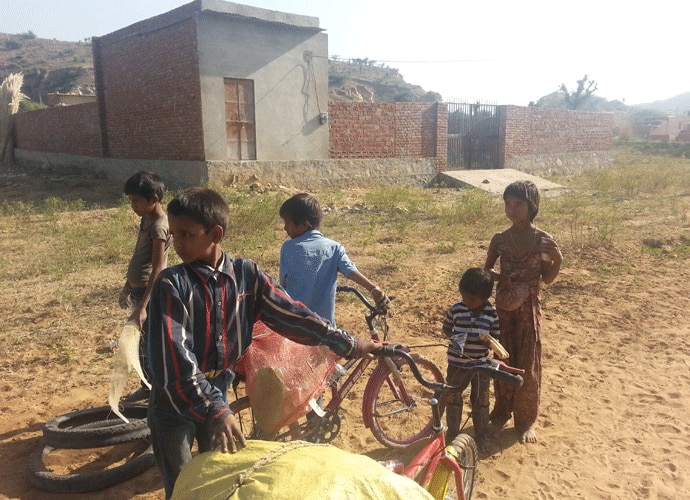 The closure of government schools has definitely helped increase enrolment in private schools. However anecdotal evidence suggests that many children enroll in private schools at first but then drop out on being unable to pay the fees later. At the same time, Raje’s government is clearing amendments to the Right to Education Act, bulk of which are geared towards easing norms which have threatened private schools with closure under the Act. Without getting into the merit of these amendments, it is reasonable to ask based on these twin developments if the Rajasthan government is trying to privatise education? Even if that is the intent, can any government treat its youngest most vulnerable citizens with such callousness, forcing them out of their schools in the middle of the school year. Vasundhara Raje has been running a public outreach program called “Sarkaar Aapke Dwaar” (Government at your Door) but for an exercise of this magnitude and import, it found it unimportant to consult the stakeholders– students, teachers or parents. Consequently schools were closed arbitrarily and no supportive measures (such as transportation services) put in place to ensure 100 per cent transfer of students into the new Adarsh schools. It is incumbent upon the Rajasthan government to clarify how many students of these “merged” schools actually transferred to the Adarsh school based on their attendance over the last three months and efforts made by the Government to minimise dropouts.  It is also not enough to simply rollback these school closures as the government has done wherever enough political pressure has been applied. Many students, especially from vulnerable communities, who have dropped out will not return to school. A truly decentralised exercise needs to be undertaken in each block in conjunction with the headmasters and parents, vulnerable areas mapped, and a plan devised to ensure that all children go back to school.

#Children, #Vasundhara Raje, #Rajasthan, #School Dropouts
The views and opinions expressed in this article are those of the authors and do not necessarily reflect the official policy or position of DailyO.in or the India Today Group. The writers are solely responsible for any claims arising out of the contents of this article.

Ruchi Gupta is associated with the Congress Party. Views expressed are personal.