Both the Congress and the BJP want a piece of 'Azadi' for politics, but Ranveer Singh wants none of it. We wonder, has anyone asked Kanhaiya Kumar?

“You'd rather be stupid than pretend to be intelligent,” admits Alia Bhatt on the couch she’s sharing with her Gully Boy co-star, Ranveer Singh, in front of Anupama Chopra, on her show. Ranveer nods in agreement.

The trio laugh, and Chopra swiftly moves on to a different question.

We’re rewinding to the precise point in the clip when Chopra asked her guests about a track from their upcoming film — Azadi — and the varying reactions it's received since its release.

At the onset, let us take a moment to applaud Chopra for asking this — if politics can seep into films, why should reverse osmosis be an issue?

After all, we’d like to know Ranveer and Alia’s views on something other than Valentine’s Day.

But Ranveer was caught off-guard, and he dodged the question — even though it did make him look stupid.

For the uninitiated, Azadi, from Gully Boy, is a page right out of Kanhaiya Kumar’s diary, the former students’ union president of JNU, who was arrested under sedition for alleged anti-national slogans. He was kept in custody for over a month and eventually released on bail, after which his chant went viral on the Internet. 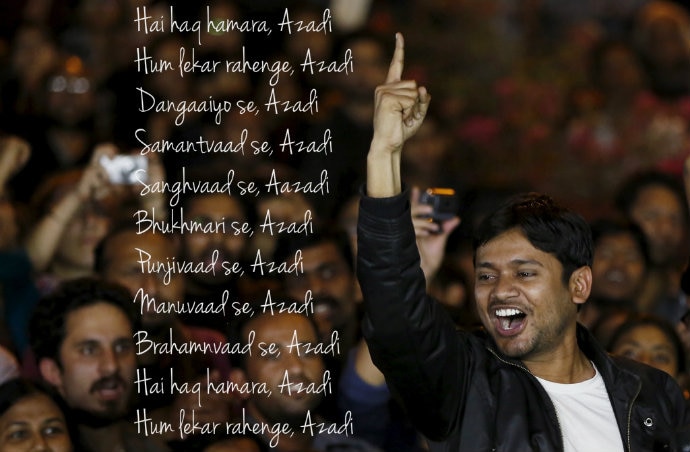 Those who follow Hindustani rap would instantly be reminded of Dub Sharma’s Azadi rap back in 2016, released right after the Kanhaiya Kumar incident.

Sharma’s song itself started off with Kumar’s words, before moving on to the actual rapping.

The current track in Gully Boy is a reinvented version of the 2016 song.

Now, Sharma has rewritten the whole track, portions of Kumar’s slogans have apparently been unceremoniously removed — along with any traces of malicious 'seditious' content — and it is but an expression of angst against the corrupt system.

Yet, as we scroll through Ranveer Singh’s social media timeline and spot a picture of him with PM Narendra Modi, you cannot help but wonder if it was a desperate attempt of damage control.

And that’s exactly what Anupama Chopra tried to touch upon, only to have Ranveer and Alia take the safe way out.

“I am very apathetic when it comes to politics. There’s a lot going on in my life as an actor. Now my personal life is going through changes. So I am very involved in my own little world. It’s a catchy track, though...bolo azadi...!” — Ranveer Singh.

What followed next is truly mind-blowing — not in a click-baity sort of way, just really honestly.

The Congress grabbed this track and made their own, adding their two bits to the lyrics with “Chowkidar chor hai.” The video, released and surreptitiously lurking in your social media feed somewhere, is a montage of speeches by Narendra Modi promising the people of the country various things, with speeches by Rahul Gandhi challenging and questioning all of them as ‘false claims.’

One might think for the Congress IT cell to appropriate this track was perhaps a given.

But hey. The BJP wasn’t going to budge either.

The saffron version of the very same track presents an exact opposite picture, with the Prime Minister and other leaders of the BJP calling out the Congress’s ‘dynasty’ politics, scams and lies. A montage of news articles and file pictures takes you through the Congress’s ‘rule’ — with the BJP emerging as your only hope for azadi by the end of the track.

While @RahulGandhi will stay up all night wondering what new lies to peddle tomorrow morning, we leave you with this goal for 2019. Have a happy friday night, people! :) pic.twitter.com/WOXOJ1QPYO

So here’s a case of deliberate reinterpretation (read: distortion) of facts, perhaps aimed at misguiding the youth, and the representatives of the youth simply think the tune they’re dancing to is ‘catchy.’

Now, whatever that is, it is not azadi — is it?

#Sedition row, #Gully boy, #Rahul Gandhi, #Narendra Modi
The views and opinions expressed in this article are those of the authors and do not necessarily reflect the official policy or position of DailyO.in or the India Today Group. The writers are solely responsible for any claims arising out of the contents of this article.