How the BJP won UP: The BJP defeated the formidable SP-BSP caste alliance in UP. Here's how

SP and BSP cadres often clashed on the ground even as BJP went on wooing the OBC voters with a new promise, and new delivery.

The SP-BSP together got just 15 out of the 80 seats in Uttar Pradesh, while the RLD drew a blank.

The SP got five seats and the BSP managed to get just 10. The BSP is reportedly now trying to understand the causes of the drubbing it received. No, it didn't work: The SP-BSP alliance failed miserably in UP. (Photo: PTI)

BSP supremo Mayawati has reportedly asked for a detailed report from district coordinators. SP chief Akhilesh Yadav, meanwhile, has sacked his entire media panel. Rajendra Choudhury, in-charge of SP media wing, issued a letter to the news channels to not to invite members of the erstwhile panel for any debates.

Conversations with the party cadres of both parties unravelled a deep sense of disappointment over the loss. They had not expected such a poor show.

The two parties are analysing if they benefited from the vote shares of the other party. The vote share of both parties dropped from 42.2% (2014) to 37.3%. Both SP and BSP had expected that the vote shares put together will help them win big.

But a growth of nearly 5% in BJP’s vote share disappointed the SP-BSP cadres.

Some SP cadres of Machhali Shahar constituency of Uttar Pradesh said it would have been better if the two parties had contested separately. These party workers were of the opinion that many strong candidates of the SP could not be given tickets because of the alliance.

With the elections over, there are also reports now of many instances of fighting within the SP-BSP coalition. An SP member told this writer that he himself was witnessing frustration and quarrels breaking out between SP and BSP members in many constituencies. Meanwhile, some SP cadres are mourning the defeat by tonsuring their heads and wearing black kuratas at many places in Uttar Pradesh.

The fact is, the conflicts and complex social contradictions, a millenia-old history of clashes and tensions between the land-holder Yadavas and the landless Dalits also created major hurdles in transfers of votes from SP to BSP and vice-verse. Similarly, the conflicts and competitions between politically dominant Yadavs and politically assertive Jatavas also hit the coalition’s chance of creating an impact.

Even among Jatavas and Yadavas, from a small section who called themselves Jagrat Yadavas (awakened Yadav) and Jagruk Jatavas (awakened Jatavas), many didn’t vote for the gathbandhan and instead chose the BJP which offered them a new take on identity.

The BJP and Rashtriya Swayamsevak Sangh (RSS) have been working hard over years to woo the support of most backward castes (MBC) in Uttar Pradesh by providing them political space and distributing the benefits of the governmental programmes and policies. 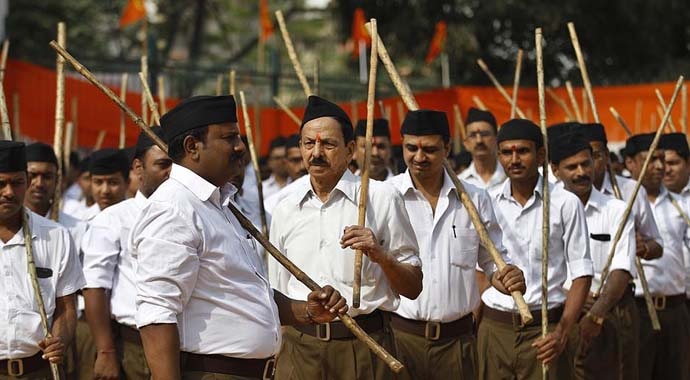 A whole new identity: The RSS has been working for years in UP to woo the most backward castes. (Photo: AP/For representational purposes only)

The communities of Nishads, Kewats, Majhwar, Paneri, Tamboli, Bharbhuja, Thathera, Kaseras, etc., were very much on the minds of the Sangh Parivar and BJP. On the other hand, at least 40 castes and sub castes of the MBC could not trust the gathbandhan and showed a liking for the BJP, a fact we saw during our field work during and after the elections.

Similarly, there are around 66 SC castes and sub castes that come under the category of Dalits. Only a few castes like the Jatavas, Pasis, Koris and Dhobis got political visibility and more than 50 Dalit castes remained invisible and most marginalised in UP.

The BJP, through its targeted governance strategy, directed the benefits of Ujjwala schemes, Pradhan Mantri Awas Yojana and Mudra scheme towards the most marginal castes such as Musdhhar, Nat, Kanjar, Hari, Begar and Kuchbadhiya.

The BSP failed to mobilise these most marginal castes in their Bahujan political block. These communities voted for the BJP, against BSP and the gathbandhan.

So, the BJP planned a big fracture in the OBC vote bank by mobilising non-Yadav castes like Mauraya, Kurmi, Kushwahas, etc., with many MBC castes, and also succeeded in mobilising non-Jatavs castes like Pasi, Dhobi and Kories with many most marginal smaller Dalit castes.

By adding these communities with general castes, the BJP created a major social block against the SP-BSP-led social mobilisation. The aspirations and hopes of development with slogans of nationalism and the determined BJP campaign against Pakistan and terrorism created a broader polarisation and a much larger grouping of Hindu society.

Together, these factors contributed to the stunning victory of BJP in UP.

In addition to all these factors, the division in non-BJP votes among gathbandhan, Congress and Pragatisheel Samajwadi Party (Lohiya) led by Shivpal Singh Yadav also contributed to the miserable performance of the alliance in UP.