Narendra Modi’s action-oriented approach is in glaring contrast with the previous regimes that used human rights as a tool to belie motivated interests.

The recent debates on Jammu and Kashmir in both the Houses of Parliament have grabbed eyeballs for various reasons — Union home minister Amit Shah’s speech is one of them.

But what we shouldn’t miss is the hint towards a paradigm shift — every member across party lines unequivocally acknowledging that Jammu and Kashmir is an integral part of India. It was heartening for a state that is often been described by observers as one that is caught between separatists and Indian nationalists.

It was also suggested that since conventional efforts in the region have not been able to completely eradicate terrorism, we need to bring a fundamental shift in the way we examine the mandate to establish peace and pursue development-driven growth model. 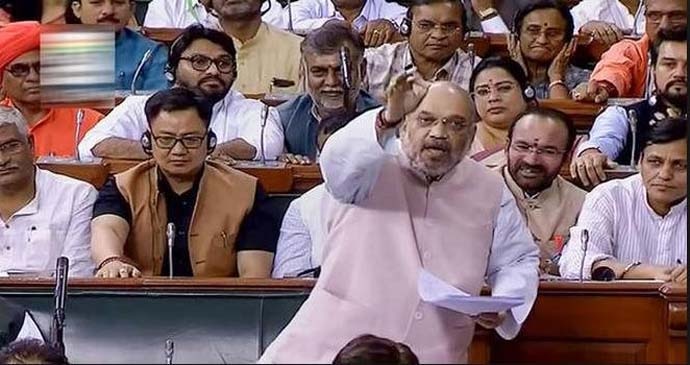 PDP’s Rajya Sabha MP Nazir Ahmed Laway observed that Amit Shah’s visit to J&K ignited hopes in the citizens of the state. As he exposed the sinister designs of those who rigged the elections in 1987 and credited Vajpayee for tackling militancy, he appealed India to adopt and embrace the people of the state and lend a healing touch. Laway also raised a compelling question in the House, as he enquired the background of those who were weakening India from within. Those who misguided scholars and engineers to rebel against the state were the real enemies of the state and not the people of J&K, he said.

Clearly, Vajpayee’s approach to Jammu and Kashmir has not only been instrumental in cementing the trust of the common citizens of the state, but it has also proven to be a reliable anchor for subsequent lawmakers and policymakers. Narendra Modi‘s continued focus on development, relentless efforts by the Centre to deliver governance and NDA’s enduring commitment to strengthening democracy in the state further ensured that politics of propaganda is unmasked and rejected across social, economic and geographical scopes.

Narendra Modi’s proposition seeks to empower Jammu and Kashmir aligned with Vajpayee doctrine on the back of zero-tolerance to terrorism and development activities in the region.

Jamhooriyat: Narendra Modi-led NDA helped the state reclaim jamhooriyat that was not just limited to six Lok Sabha and 87 Assembly seats. Panchayat elections were a watershed moment when 40,000 sarpanches were elected in 4,000 panchayats and allotted Rs 3,700 crore for the development of their villages. Narendra Modi not only deepened the roots of democracy in Jammu and Kashmir— his ability to build consensus among the populace was testified by the lack of violence during both the panchayat and the Lok Sabha polls. Vajpayee doctrine is what the party now wants to take forward and deliver. (Photo: Reuters)

Insaniyat: Narendra Modi has repeatedly emphasised that the only way for India to achieve its economic and social goals is through development, last-mile delivery for the upliftment of the weakest sections of the society (antyodaya) and Sabka Saath Sabka Vikas. welfare schemes like Ujjwala, Saubhagya, Swachch Bharat, Ayushman Bharat to J&K are agents that bring tangible change in human lives and incarnate insaniyat beyond lip service.

A. Ayushman Bharat’s coverage is highest in Jammu and Kashmir.

B. All districts have achieved 100% electrification, with just zero unelectrified households.

C. More than 5 lakh LED bulbs have been distributed.

Kashmiriyat: It is while highlighting the essence of kashmiriyat that one is reminded of the age-old syncretic fabric of Jammu and Kashmir. The state once home to Kashmiri Pandits and reservoir of Sufi saints has been overtaken by those who use fundamentalism and hardened ideological position to create social cleavages. Legacy of Kashmiriyat is embedded intricately across Muslims, Kashmiri Pandits and Sufi saints. The exodus of Kashmiri Pandits and near-extinction of Sufi saints stand to weaken the idea of kashmiriyat and propagate homogenisation writhing in anguish and bloodshed of innocents. There is an urgent need to preserve the diverse cultural heritage of Kashmir, which is bound by compassion and brotherhood.

Undeniably, we need to take concerted steps to rehabilitate displaced Pandits and restore the society that was a blend of contrasts with its commonalities.

However, we also need to take a slew of other initiatives too.

A. Exchange tours that fade the deep-seated perception of ‘unsafe Kashmir’ need to be organised around places of cultural importance like Kheer Bhawani, Jwala Ji at Khrew, Pari Mahal, Mubarak Mandi Palace and a circuit tour of various Sufi shrines, and the ancient fort at Akhnoor.

B. Cultural initiatives around food, art, literature, history that see participation from across the nation will bolster both — economy and human relations.

C. Bikers of international acclaim can be ambassadors of the natural beauty of Kashmir, and help Kashmir reclaim its place on the world’s tourist map.

Narendra Modi’s views on terrorism are well-known — both in India and across borders.

A. His zero-tolerance policy when dealing with terrorists has been consistent with his actions, including withdrawal of security cover of 919 individuals, 18 of whom advocated separatism. It is rather weird to decode why the previous governments chose to provide security cover to those who harbour separatist tendencies and have the potential to cause a conflagrant atmosphere.

B. By banning the Jamaat-e-Islami, known to support extremism and militancy along with Jammu Kashmir Liberation Front (JKLF) which was headed by Hurriyat leader Yasin Malik, Narendra Modi’s government made it amply clear that it was not willing to cede any space to those who worked against the unity and integrity of India. By transferring prisoners to prisons located outside J&K, their access to resources and information has been further curtailed.

C. The ministry of information and broadcasting banned several Pakistani television channels in J&K that were found airing fake news and creating confusion.

Modi’s strategy on dealing with militancy has stressed on the resolve to uproot the well-oiled machinery that inspired, trained and sponsored terrorism on the soil of India. Terrorism needs to be challenged at multiple levels — right from those who promote the mentality to those who infuse funds and run the deleterious ecosystem.

A. Of the 43 people arrested with regard to illegal access to foreign funds, 23 were separatist leaders.

B. Property worth Rs 1,457 crore has been seized by CBDT in 21 cases that are being investigated for funding unlawful activities.

Moreover, plenty of cogent steps have been taken by the Centre to capacitate the armed forces so that our soldiers make it with minimal loss of life.

B. All demands of CRPF in the region, worth more than Rs 2,300 crore were met, including installation of CCTVs, radars, drones, weapon modernisation and training centre for commandos.

It is notable that in both the surgical strikes — at Uri and the airstrike at Balakot — India did not lose a single soldier.

Narendra Modi’s action-oriented approach is in glaring contrast with the previous regimes that used human rights as a tool to belie motivated interests.

We also need to ban public funerals of militant poster boys, increase digital payments infrastructure to control illicit funding, provide scholarships to young achievers who can sculpt their future in a safe environment, amplify frequency of background checks, ensure all serious offenders are imprisoned outside the state and matters of financial disclosures of agencies are dealt with high levels of precision. 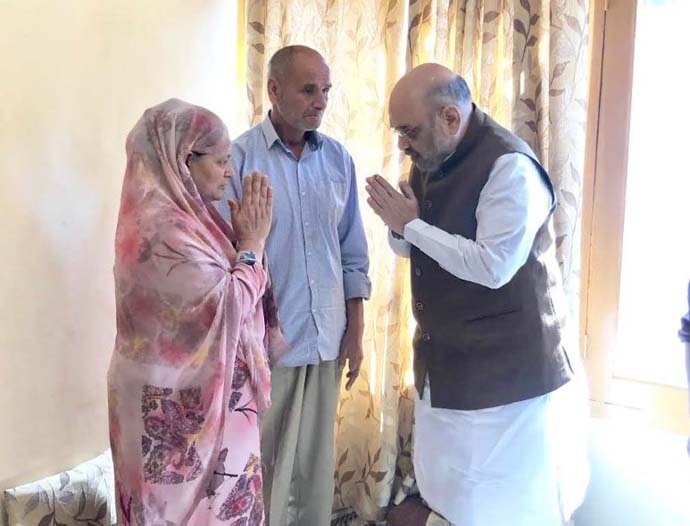 In 2014, when Narendra Modi pitched himself as the leader who had the vision and intention to make India a Vishwa Guru again, Gujarat stood testimony. The state enjoyed economic buoyancy on the back of development that pervaded across sectors, including infrastructure, social upliftment, ease of doing business and technology for transparency among others. After he assumed office in May 2014, he extrapolated the development model across India including Jammu and Kashmir, where development had waited in the wings for decades.

Narendra Modi’s stance on Jammu and Kashmir is an integration of two inter-dependent dimensions — establish peace and then carry out developmental activities in the region. Unlike previous policymakers who believed that it was impossible for development-led initiatives in the presence of terrorism, Narendra Modi used development as a tool to mainstream the youth and thereby make terrorism unattractive in the long run.

A. In a path-breaking policy decision, a separate division for Ladakh was carved out from Kashmir. This empowered Ladakh to meet its regional aspirations and improve governance. With a dedicated divisional commissioner and inspector-general of police, people of Ladakh will not have to scurry to Srinagar for completion of administrative work.

B. The Leh and Kargil Autonomous Hill Development Councils (LAHDC and KAHDC), with powers to levy and collect local taxes are the most autonomous councils in the country.

C. About 80% of the funds allocated to the Rs 80,000 crore package for Jammu and Kashmir have been disbursed; 16 of the 63 projects announced have been completed and delivered.

D. Of the 126 Central Schemes implemented in J&K, on a national scale, the state is ranked between 1-3 in 16 of them.

E. J&K has both IIT and IIMs. Moreover, it is the only state with two AIIMS. This will not only provide opportunities to local youth; it will allow students to forge ties with students from other parts of the nation and deepen their understanding of cultural and social diversity. Foundation stone for the first-ever University of Ladakh in the Leh-Ladakh region was also laid by Narendra Modi in 2019, which will encompass degree colleges from Leh, Kargil, Nubra, Zanskar, Drass and Khalsti.

F. The implementation of Shahpurkandi Dam Project on the river Ravi, with an irrigation potential of 5,000 ha in Punjab and 32,173 ha in J&K was approved by the Union Cabinet in December 2018.

As an immediate action item, we need to ensure dignity to the Valmiki community, who according to Article 35A are forced to take up safai karmchari jobs in the government, if they want to retain their Permanent Resident Certificate. It is shameful that this Constitutional discrimination, which was permitted by the Presidential Order on the advice of the Cabinet of Jawaharlal Nehru, has explicitly enjoyed tacit protection of the Congress manifesto that promised Nyay.

Lack of investment inflow, unavailability of skilled workforce including lack of professors for universities along with lethargy towards democracy have riddled the state for decades. With rigorous policy push to strengthen democracy in Jammu and Kashmir, there is no ambiguity whatsoever with respect to Modi government’s viewpoint on Article 370 and 35A.

It is the first time that there is a government at the helm that is vocal and unapologetic with respect to the abrogation of these articles.

We need to appreciate that while the abrogation of the Articles is inevitable to bridge the crevices that have deepened over a period of time, it is going to be a long-winding road that will solicit patience and unrelenting support from both organisation and the electorate.

It will also demand all political and social stakeholders to express their stance on the articles that are under Part XXI of the Constitution that is Temporary, Transitional and Special Provisions.

#Atal Bihari Vajpayee, #Narendra Modi, #Amit Shah, #Kashmir
The views and opinions expressed in this article are those of the authors and do not necessarily reflect the official policy or position of DailyO.in or the India Today Group. The writers are solely responsible for any claims arising out of the contents of this article.