Why HRD ministry was snatched away from Smriti Irani

A combination of ceaseless controversies, run-ins with Amit Shah and PMO as well as an uncontrollable nature led to her downfall.

A total of 19 new ministers were inducted into the newly expanded and hotly reshuffled Union cabinet in the Narendra Modi government, major ministries saw change of guard, while five ministers were unceremoniously dropped.

Yet, the attention which Smriti Irani got was more than the entire cabinet put together.

Now more than 20 hours later, market is still abuzz with the question, which doesn’t seem to have been satisfactorily answered.

Why was Smriti Zubin Irani "demoted"?

Was it the controversies, not implementing the Sangh agenda by the book, lack of performance, too much of negative limelight? Or, was it her increasingly souring relationship with Amit Shah and her run-ins with the PMO?

Or, was it a grand volatile mix of all of these unseemly and grossly ill-timed factors?

According to a senior BJP leader, when the party is looking at the crucial Assembly elections in UP and other states, Smriti Irani was fast emerging as the symbol of confrontation with two sections the BJP had been trying assiduously to woo: the youth and the Dalits.

The Rohit Vemula suicide controversy saw a complete mishandling of the situation by the HRD ministry (read Smriti Irani). The matter escalated and went completely out of control with the student agitation spreading from Hyderabad to JNU to eventually Jadavpur universities. 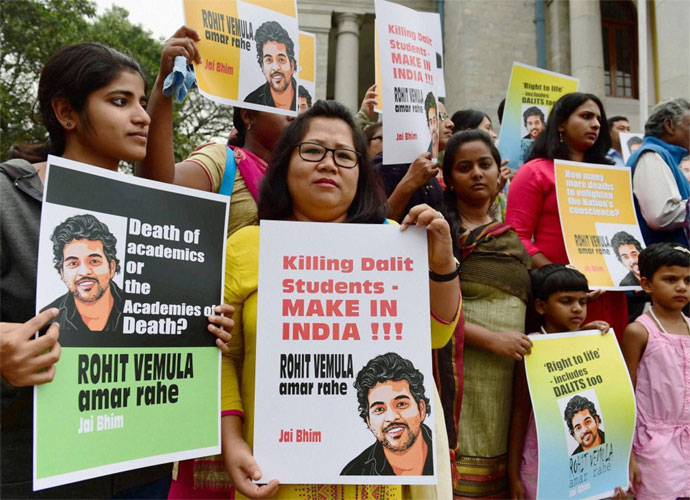 The Rohit Vemula suicide controversy saw a complete mishandling of the situation by the HRD ministry.

Even during the JNU controversy, people felt that the opposition was almost successful in creating an "anti-student" and therefore "anti-youth" image of the party. A section of the ruling party felt that had a degree of political dexterity been shown by her, the whole situation could have been easily resolved.

Instead, further hardening of position was adopted and irrespective of the outcome, the party came out, bruised and battered of the rather abrasive situation.

This, naturally, didn’t go down well with the senior leadership of the party.

This was not the only controversy Smriti found itself in. There was a sizeable section within the party, which was not only envious of her meteoric rise but also her ability to hog the spotlight - positive or negative.

There were several controversies surrounding her and an impression was gaining ground at the top that she is more in news due to her stormy and tempestuous nature and not because of her work.

Moreover, another idea which took hold within the party was that she could get away with murder due to her "proximity with the prime minister".

Thus, the reallocation of Smriti Irani’s ministry is being seen as an attempt to send a clear message to everybody within the government that one cannot just keep dropping the PM’s name to further personal agenda.

However, what added fuel to the fire and acted as a strong catalyst was her frosty relationship with the party president Amit Shah.

A senior leader pointed at the fact that her relationship with Amit Shah has seen rapid deterioration in the last year and a half, to a level where they almost didn’t see eye to eye on almost everything.

Electoral debacles in Delhi and Bihar might have seen the fortunes of Shah dwindle a bit, but all this impression was completely erased at the kind of boundless power wielded by him during the cabinet expansion.

This was not all.

There were tussles with the PMO over the degree of autonomy that the government proposed "world class universities" should enjoy. There were major disagreements between the PMO and the HRD ministry and this didn’t go down well with the PMO.

This was the biggest budget announcement on education this year.

In lieu of these controversies and run-ins, PM Narendra Modi dropped the bombshell by replacing her with Prakash Javadekar as the new HRD minister.

And the impact was so stupefying that it almost swallowed the rest of the cabinet reshuffle.

It took Smriti around 17-18 hours to break her silence on Twitter when she tweeted a series of lines thanking the prime minister for "giving her an opportunity to serve the nation".

After that she went and took charge as the new textile minister at 3pm on Wednesday, July 6.

Eloquent as usual, when asked by reporters over her share of controversies, she said: "Kuch to log kahenge, logon ka kaam hai kehna."

As a BJP leader quipped, "Even in her downfall, she was able to garner all the limelight."

#Rohith Vemula, #Cabinet reshuffle, #Smriti Irani
The views and opinions expressed in this article are those of the authors and do not necessarily reflect the official policy or position of DailyO.in or the India Today Group. The writers are solely responsible for any claims arising out of the contents of this article.