Did a ban on hunting help India's wildlife and forests thrive, or ruin them?

In the early 1970s, hunters and naturalists (there were no environmentalists in those days) petitioned the then prime minister, Indira Gandhi, to ban tiger hunting for three years, to allow populations to recover.

Gandhi responded with what seemed an overwhelming gesture with the Wildlife (Protection) Act of 1972, which banned hunting of every being from mammals to birds and reptiles. Fish were not included, since the fishing industry constituted a valuable vote bank. Insects were not included because no one thought that small in those days.

In one swoop, it became illegal for a farmer to protect his crops against wild boar, monkeys, porcupines, nilgai, parakeets, etc without permission from a forest officer. Not only was the farmer required to obtain permission to protect his fields against crop pests, but the carcass of the wild animal had to be deposited at the forest department office for burial.

45 years later, the benefit or even the reasoning behind the act is not clear. There was a survey of mammals of India during the 1960s by the late M Krishnan, but it was not associated with any recommendation for a blanket ban on hunting and bureaucratisation of crop protection. There might be one or two who can meaningfully explain what factors cause the bharal and other Himalayan mammals to be restricted to their chosen altitudinal belts. Photo: Great Himalayan National Park

One should clarify that hunting did not mean shooting anything at sight; it involved a report from forest guards to officers about the population of wildlife in their respective beats. This information was processed and permits were issued for “excess” animals, with a view to maintain a population within the estimated carrying capacity of the forest.

This is still practised successfully in most European countries and the US. The practice has been discontinued in India.

Today, there is no estimate of any of our herbivores, smaller carnivores, bears, primates or anything besides tigers.

Such permit-based hunting in appropriate seasons was distinguished from crop protection, where farmers were permitted to keep and use arms and traps to protect their crops from wild animals. 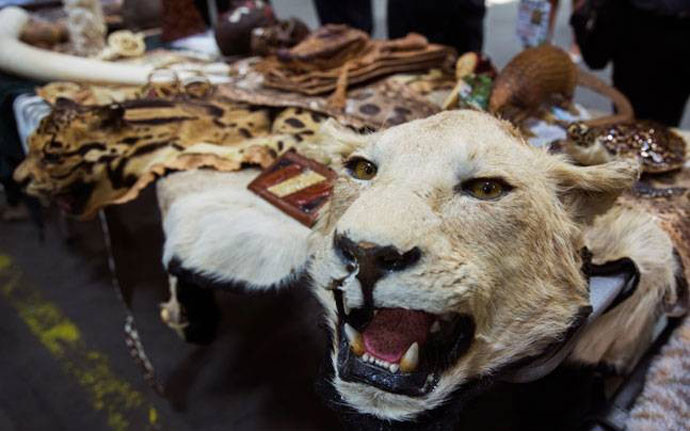 The Act provides for the burial or incineration of wildlife trophies. Photo: Reuters

One must keep in mind that practically all wild animals are prolific, so that the only real way of limiting population growth is by destroying habitats. The criminal practice of setting fire to forests destroyed the habitat for most creatures, wiped out their food sources and more often than not, incinerated the creatures themselves.

If hunting had not been banned, there would have been a hue and cry as dropping populations would have been noted and there would have been data on the basis of which action could be taken. However, the ministry of environment, forests and climate change (MoEFCC) conducts no such surveys and we have been data-deficient in this field for more than 30 years. So no one noticed that the forests were now devoid of most mammals. Birders visit far-flung islands of bird life, not once stopping to question why good birding sites are separated by such vast distances.

If our MoEFCC has been tasked with “restoring the ecological balance” vide the National Forest Policy, 1988, what have they done towards this non-existent goal during the past 30 years? Why are only wild boar, monkeys and nilgai becoming pests and not four-horned antelopes, sambhar and hog deer? Why are flocks of parakeets such as the slaty-headed and plum-headed, a quarter the size they were 40 years ago?

The answers are not far to seek: the destruction of our habitat, especially through mismanagement and fire; the lack of regular data, as used to be available during the period when hunting was legal; a severe drop in the numbers of people familiar with the ways of animals and their requirements — or what used to be called the ways of the wild — who have been replaced by researchers following meaningless Cartesian models of analysing wildlife and their traits. Why are flocks the slaty-headed parakeets a quarter the size they were 40 years ago? Photo: Alok and Renu/HBW

A biologist’s laboratory should be the outdoors; today, the outdoors is called “the field” and “field visits” are few and far between. Usually, the aim of “field visits” is not to increase the observer’s experience, but to gather “data” which can be statistically analysed and used to create data sets that look impressive on paper, but are meaningless in real time.

Among all the wildlife experts and researchers, there might be one or two who can meaningfully explain important questions like what factors cause the blue sheep (locally known as bharal) and other Himalayan mammals to be restricted to their chosen altitudinal belts, or why white-winged ducks do not occur in Sikkim. Besides these few, we have a majority of number crunching creators of histograms and pie graphs who cannot recognise a degraded forest when they see one.

Natural history, which is the field of naturalists, depends on reliable reference collections. Our national reference collections are pitiable, with only the bird collection of the Bombay Natural History Society (BNHS) approaching anything on the lines of what should have been in place for all groups of animals. For everything else, we have to approach international institutions that possess collections of Indian material. This is why we have less than a handful of Indian authorities in any field related to nature.

What, you might ask, does the Wildlife (Protection) Act have to do with this? In one telling example, a scholar pursuing her doctorate wanted to survey the butterflies of a protected area in Gujarat. The chief wildlife warden’s office replied to her request, asking her, among other things, to furnish a list of species she wished to survey (as required under the law)! Such are the provisions of our Act. The Act provides for the burial or incineration of wildlife trophies, at a time when our museums are practically empty. Our public has no access to reference collections of insects, birds or mammals (we do not have a complete collection of mammals at any Indian institution). We have one taxidermist left in Mysore!

Meanwhile, the more than 5,500-year old art of falconry, which is banned in India, is inscribed on UNESCO’s Representative List of Intangible Cultural Heritage of Humanity, since it is associated with nature conservation, cultural heritage and social engagement within and among communities, according to the citation. However, if the primary aim of our conservation laws was to make rural life unlivable in order to increase the industrial labour pool, naturally such petty issues will be overlooked.

Coincidentally, the Wildlife (Protection) Act 1972 came into force a year after the Privy Purses to erstwhile Indian royalty were abolished. For the uninitiated, hunting has traditionally been a royal sport for thousands of years. Also, the then PM Indira Gandhi was well known for her love for animals and the romantic concept of nature. Perhaps these two circumstances, one politically significant, the other emotional, combined to give India wildlife legislation that has brought misery to millions and misled two generations into believing that something useful was being done for Indian wildlife.

It is certainly high time that the provisions of the Act are reviewed with a view to extend genuine protection to Indian wildlife other than tigers.