Why people celebrating the Hyderabad encounter should worry the judiciary

The public celebrating the extra-judicial killings goes on to show the poor faith they have in the judicial system.

The nation woke up on Friday morning to the news of the encounter of the accused in the Hyderabad rape case.

The reactions haven’t stopped pouring since — most of them congratulating the Hyderabad police for the encounter.

If the claims by the police are true and the accused were indeed trying to flee, then the use of force and encounter seem justified. However, what if that was not the case and the encounter was staged? The possibility leaves us with a lot of questions and concerns, as do the celebrations in the case of extra-judicial killings.

Firstly, the reaction of the people supporting this Singham-style justice shows the minimal faith they have in the due judicial process. This should be ringing alarm bells for the Indian judiciary.

Court verdicts in cases of crimes like rape and murder take decades and people are bound to get frustrated. It gets worse when it comes to civil cases, which span generations and drag on for four to five decades. The top courts take British-style vacations (for months every year), while the common man is left running from one black coat to another, spending money and time in seeking justice.

Second, the question that needs to be answered at this juncture is whether all are equal in the eyes of the law. For instance, on November 24, 2019 — three days before the heinous rape and murder of the Hyderabad veterinarian — the Supreme Court worked on a Sunday to hear the plea of the political parties in the Maharashtra government formation case. The political leaders could not wait even for a day to form the government in the state that holds the reins of India’s financial capital.

So what stopped the courts from setting a one-week deadline and expediting the hearing in the Hyderabad case? Was the outburst of emotions by the Indian public not visible to the upholders of justice? Why do the politicians vying to form a government (and their family feuds) get preferential treatment over the family of a rape-murder victim seeking justice? The system is found wanting in meeting the humble expectations of its people. 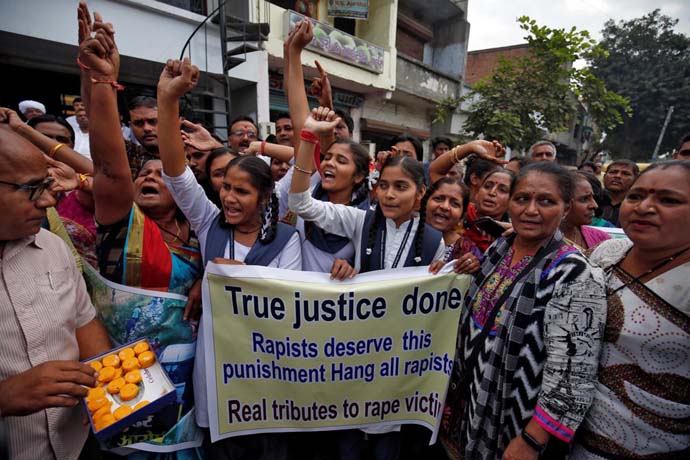 Third, what if (and a big if here) the police had staged the encounter? If there is even a remote chance of that happening, it should be checked and not encouraged. There is a reason why the investigator, juror and executioner are separated. If the dispensing of justice is left to those other than the judiciary, then who will decide if the accused is guilty or not? The media, the police, those in power, or the public? Will such systems then not lead to scenarios where trials by media end in rapid-fire executions by the police? How would this system then check itself from sorting personal and political vendettas by using the police as a tool? The police department has more political masters than those in the judiciary. Will the dispensation of justice by the police not lead to a system of a ‘hitmen wing’ of those in power?

Furthermore, suppose a person named X — who hails from a politically well-connected background — commits a crime, and then “employs” the local police to frame another person (named Y) for the crime. There will be media trial against Y and police will kill Y in an encounter. The case will be closed and any chance of justice to the victim or the person framed, will also die in the encounter.

And the police is no great upholder of justice either. National Human Rights Commission revealed that it had recorded 1,782 cases of fake encounters in India between 2000 and 2017. That is one fake encounter every three days!

Time and time again, the alarm bells have gone unheard. The justice system needs to be foolproof from both ends — removing false positives and ensuring relief to the victim at the same time.

Also read: Andhra and Telangana encounters: How police gets away with murder