Ever since the BJP attacked Rahul Gandhi for using ‘ji’ to refer to a terrorist, I have been waiting for memories of the hijack of IC 814 to resurface. Over the last 48 hours, they are all back — with allegations about how the BJP surrendered to terrorists and how Masood Azhar, who was in an Indian jail, was escorted to freedom by Ajit Doval.

Much of what is being said is either simplistic or just plain wrong.

I was editor of the Hindustan Times (HT) when the hijack occurred and we covered it in great detail. Here’s what I remember:

The plane was hijacked from Kathmandu. There are various theories about how the hijackers got weapons on to the plane, ranging from sloppy Nepalese security to corrupt airport officials. But everyone who mattered in R&AW at the time believed that an official of the Pakistani embassy went to Kathmandu airport, used his diplomatic status to bypass security and gave the weapons to the hijackers. In fact, the security establishment believed that the entire hijacking was an ISI operation. 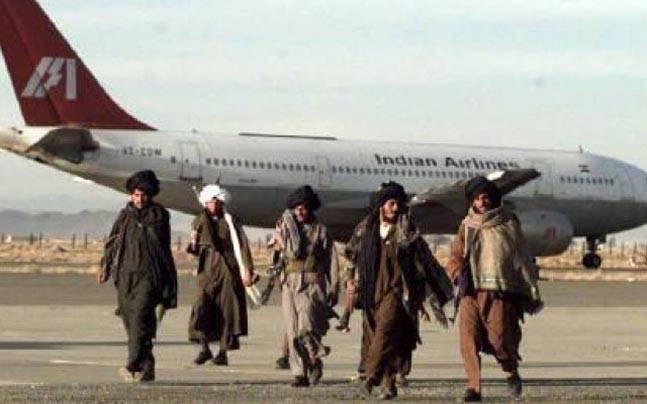 When the aircraft landed at Amritsar for refuelling, we could have shot out its tyres or had security forces storm the plane and overpower the hijackers.

In the days that followed, there were many post-mortems and explanations. It turned out that we had no action plan in place on how to deal with a hijacking, especially if it happened at a relatively small airport.

Local officials in Amritsar did not know what to do — Delhi took too long to formulate a response and even then, there were fears that the hijackers would start killing passengers if we did anything hostile. By the time the forces in Amritsar had been instructed to ground the plane (perhaps by damaging the tyres), using a fuel truck as cover for the action, the aircraft was ready to leave.

Did the hijackers always intend to end up in Kandahar?  I believe they did.

At that stage, Afghanistan was run by the murderous barbarians of the Taliban who had cut it off from the rest of the world. (Pakistan was one of the few countries that recognised that regime.) The ISI had played midwife when the Taliban was born — it was the logical destination. 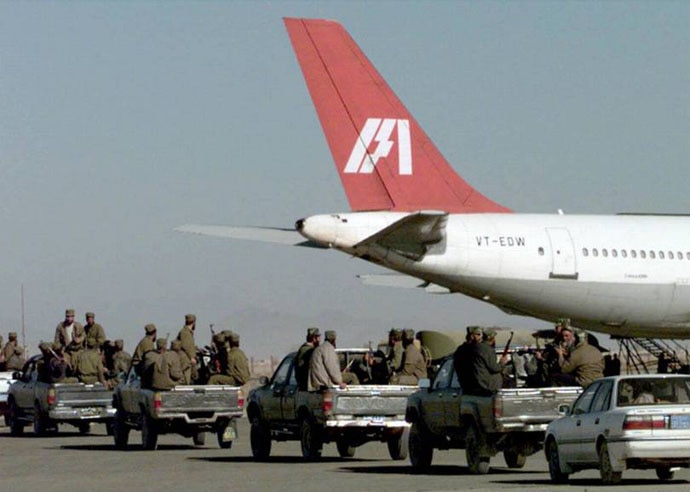 There was another factor. Though India had warned the world about the Taliban and the danger it posed to humanity at large, the West just wasn’t interested. When the plane landed in Kandahar, our diplomatic representatives reached out to leaders in important Western capitals. They got nowhere. It was the Christmas-New Year week and everyone was on holiday.

India sent a crack team of officials and diplomats to Kandahar to negotiate. From what some of them told me later, they received a frosty reception from the Taliban who were openly fraternising with the ISI’s representatives and made no secret of which side they were on.

The terrorists started out with extravagant demands but the Indian negotiators (including top R&AW and IB officials, of whom Ajit Doval was only one) bargained them down to the release of three men from Indian jails. The one prisoner whose release was non-negotiable was Masood Azhar. His brother was among the hijackers and some believed the entire hijacking had been planned to secure his release.

The negotiators saw the explosives that the hijackers had loaded on to the plane and reported back to Delhi that there was no further room for negotiation — the hijackers were ready to blow up the aircraft and all the passengers with it.

What could any Prime Minister have done? AB Vajpayee’s first reaction was to say no. His tough National Security Advisor, Brajesh Mishra, took the same line.

But can the government of India sit by and watch as hundreds of innocent civilians are blown up in a foreign airfield?

Ultimately, Vajpayee had no choice.

He agreed to release the three prisoners.

Not everyone agreed. Farooq Abdullah was a vocal opponent of the swap. One of the terrorists was in a Kashmir jail. Farooq refused to release him. Eventually, AS Dulat, then chief of R&AW, was sent to Kashmir to persuade him. (A few years later, when I interviewed Farooq, he maintained that his original stand had been the correct one.)

Was Vajpayee under pressure, as is now being claimed? Yes, he was. Relatives of the hostages were storming into briefings and disrupting them with their demands that the swap should go ahead.

But was Vajpayee under pressure from the media and the Opposition as BJP trolls are now claiming? Personally, I have little recollection of seeing much pressure from those quarters (though yes, individual opposition leaders did claim to represent the relatives of the passengers). The press, by and large, was supportive of the government. We knew the Prime Minister was in an impossible situation.

Besides, anyone who knew Vajpayee will tell you that he was not the sort of man who could be pressured into releasing terrorists by an editorial or by a barb from an Opposition leader. He was one of India’s greatest Prime Ministers — when he took a decision, it was only after he had weighed all factors. Freed passengers of the hijacked plane prepare to board a minibus. (Photo: Reuters)

In any case, the media remained largely supportive until the day of the swap — the decision to send Jaswant Singh on the same plane as the released terrorists was a surprising one and, in the view of many, a mistake. Moreover, Jaswant was humiliated at Kandahar airport. For nearly an hour after he landed, nobody bothered to come to the plane. Apparently, they were all at prayer.

When they finally took cognisance of the Indian minister’s aircraft, the Taliban was barely polite. It was clear that the ISI was running the show.

One Indian negotiator tried to engage a released terrorist in conversation. He was told, “Fuck off, you Indian bastard.”

Till this day, nobody has been able to explain to me why Jaswant Singh felt the need to go personally and hand over Masood Azhar and the two other terrorists. Later, Vajpayee seemed to think it had been a mistake though, as was characteristic of Vajpayee, it was just a few words, in an off-the-record chat. I never heard him talk publicly about any regrets or reservations.

The media took the cynical view that Jaswant Singh went to Kandahar for the photo-up, which I think was unfair to him. More plausible is the view that as money was to be handed over (to the Taliban) and that the plane carried lakhs of dollars in cash, the government thought it was necessary for a senior minister to keep a watch on the proceedings. (The government never officially confirmed that any money changed hands). A third, more charitable, view is that a senior minister needed to be present to intervene in case of a last-minute snag. 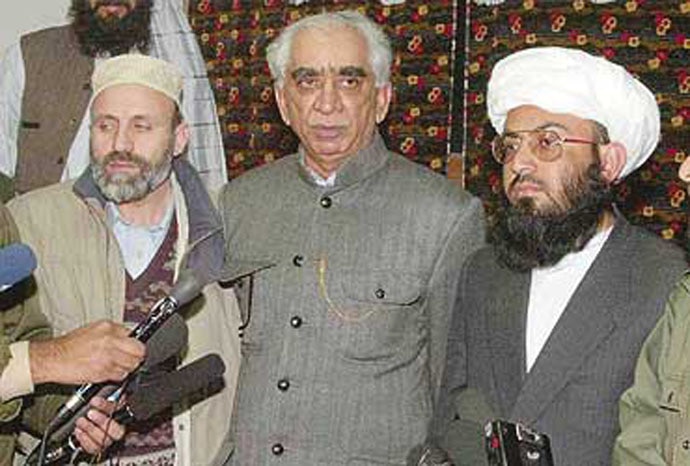 India had to digest the spectacle of our Foreign Minister Jaswant Singh escorting terrorists to freedom. (Photo: Associated Press)

Whatever the truth, it is clear that the decision damaged Jaswant Singh and the government’s standing. Photos of Jaswant holding hands with Taliban leaders were widely circulated to universal disgust.

In today’s volatile political environment, the hijacking is being raised again and again to score brownie points. Let’s leave that to the politicians. But here are some things we should not forget.

The world ignored the Taliban — and India’s complaints about their murderous nature — till 9/11 occurred and America suddenly woke up. But now, the Americans are back to doing deals with these barbarians. And the same pattern will be repeated.

Even if the hijacking was not an ISI operation, there is no doubt that Pakistan warmly welcomed the freed terrorists. One of them was later involved in the kidnapping and murder of Daniel Pearl. Another returned to Kashmir and resumed his terror activities — and Masood Azhar, as we know too well, built up a new terror network under the benign eye of the ISI. We screwed up massively at Amritsar. But I am not sure we have learned any lessons from those mistakes. If a hijacked plane landed at a small Indian airport today, would the airport authorities know what to do? Would forces be trained enough to know how to storm the plane?

And finally the big one — was the passengers-for-terrorists swap justified? The BJP is now backtracking and on social media, its trolls are falling back on the lie that Vajpayee acted under pressure from the media and the opposition. This is not only insulting to Vajpayee but it suggests that today’s BJP believes that Vajpayee was wrong. (But that we should let him off because the poor man was under so much pressure.)

Was Vajpayee indeed wrong? Would Narendra Modi have acted any differently?

We don’t know because two decades after IC 814, we still don’t have a policy in place. Does India negotiate with terrorists? The US does not. Israel does not. Some European countries, on the other hand, do negotiate.

Which is the right choice for India?

We don’t know because we never discuss it. If we do examine the past, it is not to prepare ourselves for the future. It is only to distort it to suit the battles of the present.

That is the tragedy of Indian politics.

And the price we continue to pay for it is our damaged and weakened national security.