Imran Khan is in the US on a ‘private tour’. We should just relax!

Was Imran Khan supposed to be received by US officials? Why would they send people to receive army chief General Qamar Bajwa?

There’s no reason why all eyes are on this Donald Trump-Imran Khan meeting on July 22.

This is the first time that Imran Khan is visiting the country after becoming Pakistan's Prime Minister. But this doesn’t warrant such hue and cry on our part. To put it in simple terms, Imran Khan wants money and global validation. So he got Hafiz Saeed arrested just before meeting Trump. Donald Trump wants Pakistan’s support in Afghanistan crisis, which Pakistan is already facilitating. Next year, Trump will also face an election.

Neither Imran Khan wants a royal welcome in the airport, nor has Trump invited Imran Khan to the United States. It’s Imran Khan’s first visit to the US in which he would also meet Donald Trump — the meeting reportedly arranged by Donald Trump’s son-in-law Jared Kushner at the behest of Saudi crown prince Mohammed bin Salman. (MBS is a mutual friend of Imran Khan and Jared).

What if Donald Trump declined to meet Imran Khan? 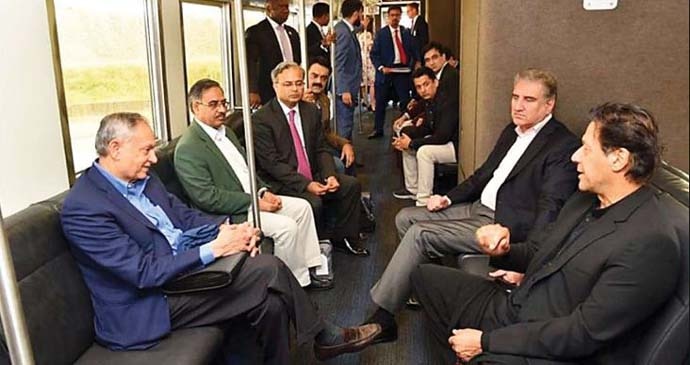 Why are we laughing at this? Can't Imran Khan chill with his people in the United States? (Photo: Twitter)

The Twitter world that is bemused to see Imran Khan travelling in a people-mover would like to believe that Khan would have be heartbroken. He would have cancelled his US trip — extending his cost-cutting spree.

No, that’s not how things work.

Khan is in the US to meet other people too, and most importantly officials of the International Monetary Fund (IMF) and World Bank apart from Pakistani investors, former embassy officials etc. He is also scheduled to meet Mike Pompeo and Nancy Pelosi. The Pakistan embassy had no lobbyist in the US for the last six years.

Now, it has entered into an agreement with a firm, Holland and Knight, which will advance Pakistan’s interest in the US.

Khan is also supposed to meet newspaper editors there.

Maybe, US media will soften their stance on Imran Khan. Imran Khan is doing exactly what he does in Pakistan. Casting his spell. (Photo: Twitter)

So, this is purely a public relation drive engineered by the Pakistan Tehreek-e-Insaf (PTI) government. And the preparations have been going on for a long time.

Pakistan’s external affairs minister Shah Mehmood Qureshi reached there before. He only went to the airport to receive Khan. The party built a war room to host Imran Khan’s first jalsa at Capital One Arena in Washington which was live telecast in Pakistan. The party was mobilising the diaspora which, as posted by the PTI on Twitter, swarmed the venue and made Imran Khan’s first jalsa a massive hit.

The United States stopped its aid to Pakistan last year, soon after Imran Khan was elected. It was a lot of money and Pakistan needs money. The condition Trump will put forward is to stop funding terrorism.

Khan will listen to it, will dangle his 'cosmetic' attempts of arresting terrorism (the arrest of Hafiz Saeed) while, in all probability, army chief General Bajwa, seated beside Khan, will nod (He's accompanying him on this tour).

It's just a recce undertaken by the Pakistan army aided by the PTI government.