Not cricket at all - How Imran Khan won in politics, using hate

In no surprise to any serious observer of Pakistani politics, Imran Khan’s Pakistan Tehreek-e-Insaaf (PTI) has garnered the lead in Pakistan’s elections. The election was marred by allegations of military meddling and pre-poll rigging. Those allegations and the likelihood of falling short of an absolute majority will taint Khan’s victory for years to come. Imran Khan made his first PM-like speech – before the official results were even out. (Photo: Screengrab)

In an indictment of the Election Commission’s incompetence, the results were still trickling in almost a day later. There were complaints of military officers directing polling staff and polling staff refusing to share requisite forms for election results with polling agents of parties other than PTI. 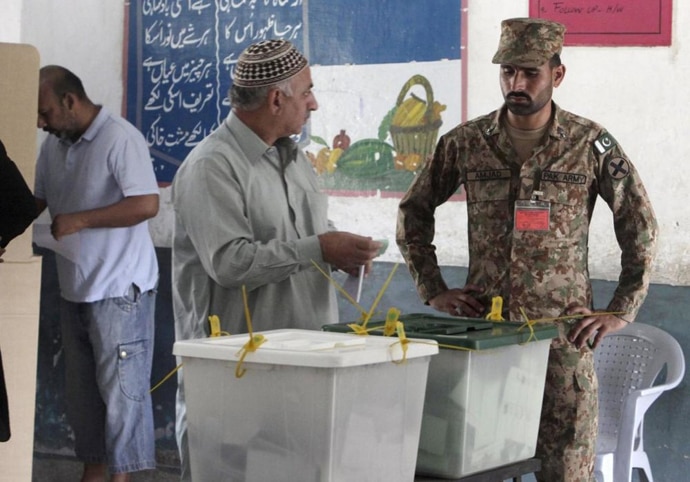 Watched over: The Pakistani Army looking after polling booths has been noted worldwide. (Photo: AP)

The Pakistan Muslim League (Nawaz) called the preliminary results an assault on democracy. Party leader Shehbaz Sharif claimed the results showed “a sheer rigging”. “The way the people’s mandate has blatantly been insulted, it is intolerable,” Shehbaz said. “We totally reject this result. It is a big shock to Pakistan’s democratic process.”

Imran Khan mobilised many young voters with his mantra of ‘Naya Pakistan” or a New Pakistan.

But that may be harder to achieve with a weak Parliamentary majority and a unified opposition that feels cheated. The country’s second democratic transfer of power will, thus, start off on the wrong footing.

Unlike the first democratic handover between the PPP and the PML-N in 2013, this election ended up becoming a contest between pro-establishment and anti-establishment forces, the term 'establishment' being used in Pakistan as a synonym for the all-powerful military. It was fiercely contested by all the country’s leading parties, including the conservative Islamist MMA coalition, and an assortment of minor parties, some of them propped up by the establishment.

The establishment’s goal seemed to be to weaken and decimate the traditional parties.

Pakistan’s military, spy services, judiciary and the Election Commission have faced questions about the fairness of elections before. They have created political alliances and propped up politicians throughout Pakistan’s chequered history – but this time, all inhibitions about appearances of propriety were abandoned.

Even Nawaz Sharif’s rise to the office of prime minister in 1990, as head of the ISI-created Islami Jamhoori Ittehad (IJI), did not have such an odour of deceit, open partisanship of state institutions, or of the people’s mandate being robbed so blatantly. This time round, pre-poll rigging was carried out through media censorship, arbitrary disqualifications of leading candidates, manipulation of political parties by intelligence services, and the mainstreaming of terrorists. Election day continued with more flagrant manipulation.

Why did the military feel the need to intervene so directly and openly to favour one political party over others?

In 1990, the army was motivated by fears of Benazir Bhutto being close to the West at a time when sanctions seemed inevitable over Pakistan’s nuclear programme.

This time, it seems insecure about the burgeoning India-US partnership and the prospect of losing its grip on some of the terror groups it created. In the Generals’ opinion, the PPP and PML-N cannot be trusted in view of their alleged corruption and unwillingness to embrace the Jihadi narrative.

The establishment would rather trust a populist leader using hate to generate support, the Pakistani equivalent of Turkey’s Erdogan and Hungary’s Oban. Imran Khan has earned the military’s trust by appeasing terrorist actions, saluting the Pakistani establishment and holding his opponents and their supporters in total scorn. They're not so far apart. Imran Khan in Pakistan and Recep Taiyyip Erdogan in Turkey have much in common. (Photo: DailyO)

Imran Khan’s victory is likely to lead to a very divided Pakistan.

A country that is barely holding on economically – and where terrorists have been mainstreamed – is unlikely to break out of international isolation. His arrogance and lack of introspection – and the use of hate speech against other groups including religious minorities – has led to comparisons between him and other celebrity leaders, including one in the US, who rose to power without experience in government.

Among the fears of Pakistan’s centrist citizens is the likelihood of Prime Minister Imran Khan adopting extreme positions on ties with India and the United States, and stepping up support for terrorist organisations, especially the Taliban.

Khan is also known for intolerance towards those who disagree with him within Pakistan. What now? Ahmadi Muslims in Pakistan leaving their homes after threats against their community. (Photo: Reuters)

Pakistani religious minorities are afraid of further marginalisation and violence, given Khan’s anti-Ahmadi rhetoric in the final days of his campaign. Khan’s supporters tend to be verbally violent on social media and his own verbal excesses are also well-known. He described Pakistani liberals as ‘bloodthirsty’ and has often been willing to describe his opponents as ‘traitors’ and thieves.

With no prior experience in government, Imran Khan will have to deal with the many challenges facing Pakistan, including a looming financial crisis. Managing the economy of a country that exports almost half the value of what it imports will prove harder than peddling the over-simplification that ending political corruption alone would make Pakistan prosperous. A long, hard road ahead. Slums in Karachi. (Photo: Reuters)

Uneasy days lie ahead for Pakistan. After the euphoria of Imran Khan’s supporters subsides, Pakistan needs to deal with its substantive problems. Corruption is one of them – but a greater problem is the establishment’s refusal to recognise that its inflexible worldview about the US, India, Afghanistan, Jihadi terrorism, and Pakistani patriotism are all sources of difficulty for the country’s hapless 200 million.