Imran Khan cries foreign hand in toppling his govt. 5 highlights from his speech

Cricketer-turned-politician Imran Khan is facing the biggest test of his life. Khan had ascended to the throne of Pakistan after years of struggle. In 2018, his political party Pakistan Tehreek-e Insaaf shot to power by winning 149 seats in a 342-member National Assembly. After collating alliance with many independent MPAs, Khan formed the government.

But on March 8, 2022; nearly four years after the government, his government faced a no-confidence motion from the Opposition. While the opposition leaders and several of his own independent MPAs might jump ship, resulting in the falling of his government, Khan also faces coldness from the Army which backed him in 2018. 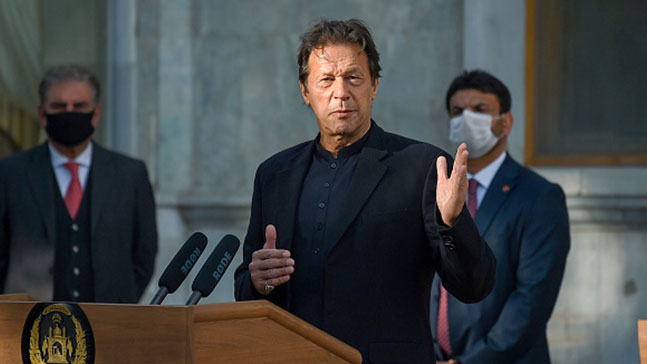 The bill was tabled in the Assembly today and the Assembly was adjourned by the speaker Qaiser Ali till March 31, 2022. PTI has 155 MNAs in a 342-member assembly. The magic number to retain the government is 172. Interior Minister Sheikh Rashid had said that the fate of the no-confidence motion would be out by April 4, 2022.

But Imran Khan is confident of retaining power by defeating the opposition. In his speech 'Amr Bil Maroof (enjoin the good)' at Parade Ground, Islamabad on March 27, Khan lashed out at the Opposition. Here is what he said in the speech:

Imran Khan cried foreign interference in toppling the government of Pakistan. In his highly emotional and charged speech, he said, ”Attempts are being made to influence our foreign policy from abroad. We have been aware of this conspiracy for months.” He also said that foreign money is being used to change the government in Pakistan.

Pointing at the Opposition, he said that he knew who was plotting these conspiracies.

Imran Khan also claims of a secret letter; a crucial piece of evidence he has, which he says proves that there indeed is foreign interference. He said, ”The letter I have is proof and I want to dare anyone who is doubting this letter. I will invite them off the record.” He produced a letter from his jacket and showed it to people. He said that he was not labelling any allegation, but that he had concrete proof of his statement.

Sharpening his attacks against the Opposition, Imran Khan called Shehbaz Sharif (leader of Pakistan Muslim League), Bilawal Bhutto (leader of Pakistan Peoples Party) and Maulana Fazlur Rehman (leader of Jamiat Ulema-e-Islami) the 'three stooges' who have been looting the country for years. Khan said he won’t back down like Pervez Musharraf did and that he would fight back.

THE MAN IN LONDON

Imran Khan mentioned a man in London, who he says is plotting the crippling of the government in Pakistan. The man in London here is a reference to Nawaz Sharif, the former Prime Minister of Pakistan.

Sharif in 2018 was disqualified from the office by the accountability court and sentenced to 10 years in prison. At present, he is on expired bail and undergoing treatment in London.

WILL NOT GIVE NRO AT ANY COST NRO or National Reconciliation Ordinance is a controversial ordiance that was issued by Pakistani President Pervez Musharraf in 2007. The bill granted amnesty to politicians abd bureaucrats who were accused of corruption and several other crimes to leave the country for their own profit. The bill was declared unconstitutional by the Pakistani court in 2009.

External Affairs Minister of Pakistan Shah Mahmood Qureshi also said that the joint opposition made Imran Khan an offer of granting NRO and that they would retract the no-confidence motion.

Iman Khan has said in his speech that he won’t give NRO at any cost. “General Musharraf tried to save his government and gave these thieves NRO, and it resulted in the destruction of Pakistan,” he said.

Imran Khan and the rest of Pakistan will know about the fate of Khan's government by April 4, 2022.