Imran Khan as Pakistan PM, a match made in hell

After winning the cricket world cup for Pakistan, Imran Khan's 26-year-old political journey so far has been full of ups and down. Here is a look at the key events.

When Imran Khan became the Prime Minister of Pakistan in 2018, he promised a "naya Pakistan", where there would be no place for corruption; and the country would see an economic revival. But, now, when he has been ousted as the PM of the nuclear-armed country after a vote of no-confidence in the Parliament, Pakistan is in a much worse shape than it was three-and-a-half-years ago.

According to a report in The Dawn, Pakistan’s GDP has fallen from 315 billion USD in 2018 to 292 billion USD in 2022. His promise of ending corruption has also failed badly as the country's ranking on Transparency International’s Corruption Perceptions Index saw a steep fall. In 2022, Pakistan’s rank has fallen 16 places to 140 from 124, out of 180 countries.

So, how did it all go so wrong for Imran?

How did the Kaptaan, who took Pakistan to their greatest cricketing achievement ever, fail so miserably at his first stint as the PM, that in order to save his chair he had to trigger a constitutional and political crisis in the country before his exit?

Here is a look at his political journey so far.

Winning a Cricket World Cup in a country like India and Pakistan is something that rarely gets trumped by any other achievement. But, Imran was not someone who was going to settle for just that. He wanted more. He had bigger plans.

After his successful movement against fighting cancer, Imran started being more vocal on political and social issues. He started writing his opinions in newspaper columns.

It took a while for him to give concrete shape to his political ambitions, but, in 1996, a year after his marriage to Jemima Goldsmith, Imran finally launched his political party Pakistan Tehreek-i-Insaf (PTI).

There was much hype around Imran's party. Sensing this, the Pakistan Muslim League-Nawaz (PML-N) offered to support PTI candidates in 30 constituencies if they were ready for an alliance during the 1997 General Elections. Imran rejected PML-N's offer, but his party failed badly and could not win a single seat. The PTI got only 1.7 per cent votes in the polls. Nawaz Sharif was sworn-in as Pakistan's new Prime Minister.

After Pervez Musharraf’s coup in 1999, Imran, with an aim to be in power, supported the Army General's referendum. Musharraf’s government held elections in 2002. This alliance also didn't work out as Musharraf thought Imran was overestimating his party's popularity. He turned out to be right as the PTI's poor show continued and the party banked with just 0.7 per cent votes. One silver lining for Imran was that he won a seat from his ancestral city Mianwali. Even though PTI was still not a big political party, Imran's political stature was seeing a steady rise. Imran was imprisoned briefly in 2007 for criticising the regime of General Pervez Musharraf. His party, like many others, boycotted the 2008 General Elections, calling them rigged. His stand on the polls, criticism of the Musharraf regime, and his statements on corruption during a time when Pakistan was struggling with inflation made his popularity grow.

In 2013 General Elections, Imran finally got the results he had been expecting since coming into politics in 1996. PTI became the third largest party in Pakistan after (PML-N) and PPPP (Pakistan Peoples Party Parliamentarians). With 35 seats, the PTI had a strong presence in the National Assembly. Imran was elected again from his ancestral seat, and he promised a 'new Pakistan'. Imran got a lot of support from Punjab and the Khyber Pakhtunkhwa regions, and it was seen as one of the major reasons behind his rise in politics. Once became the PM, Imran had big promises to keep. To live up to the expectations of people who chose him to revive the country's economy and to make Pakistan "corruption free", were not easy tasks. With many small parties as his alliance partners, Imran had to make sure they were happy with the decisions he made. Also, no prime minister had completed a full five-year tenure in Pakistan's 75-year history, and Imran wanted to end this trend.

Two major reasons Imran was ousted as the PM were that inside the National Assembly, he lost the support of his allies and outside the Parliament, the army lost confidence in him, reported Al Jazeera.

A deepening economic crisis and the double-digit inflation during the Covid-19 pandemic made his situation even worse.

On March 3, 2021, Opposition leader and former PM Yusuf Raza Gilani defeated Pakistan’s Finance Minister Abdul Hafeez Shaikh in elections for the upper house of Parliament. It was a big shock for Imran who had campaigned for his colleague.

In February 2022, the Prime Minister took a populist decision announcing a cut in domestic fuel and electricity prices despite a global rise. This led to the Pakistani Rupee falling to historic lows against the US dollar and the State Bank of Pakistan sharply increased interest rates in an emergency meeting. 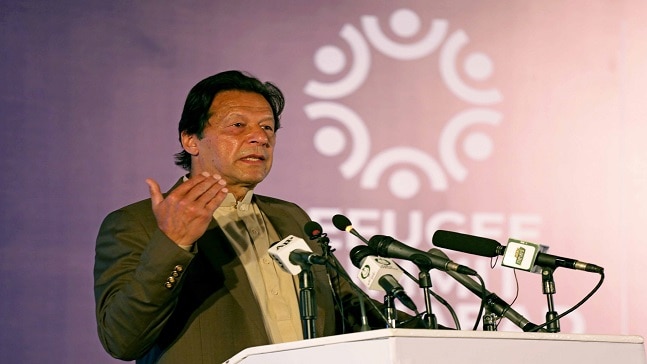 On January 11, 2022, PML-N's Khawaja Asif said the Imran Khan-government had lost the majority. On January 21, Ayaz Sadiq of the PML (N) said the Opposition was ready for a no-confidence motion against the PM.

On February 11, Pakistan Democratic Movement (PDM) chief Maulana Fazlur Rehman, on behalf of the Opposition, announced a no-confidence motion against the PM.

The Imran government did not take it seriously and challenged the Opposition to table the motion.

On March 8, the Opposition tabled the no-confidence motion, reported ANI.

On March 21, in a desperate attempt, the Pakistan government filed a reference for the interpretation of Article 63(A) in the Supreme Court. A week later, Imran claimed that the Opposition's no-confidence motion is part of a "foreign-funded conspiracy" to oust him.

Shahbaz Sharif tabled a no-confidence resolution against the PM on March 28, but, on March 31, the session for the no-confidence motion was adjourned till April 3.

On April 4-6, the Supreme Court began hearing the rejection of the no-trust vote.

On April 7, the SC dismissed the ruling by the Deputy Speaker to block no-trust vote and ordered restoration of the National Assembly. The court asked no-trust vote to take place on April 9.

On April 9, Pakistan's lower house of Parliament voted in favour of removing PM Imran Khan from office. Opposition parties were able to secure 174 votes in the 342-member house in support of the no-confidence motion. Imran became the first Pakistan PM to lose a no-trust vote.