Imran Khan in his first speech as the ousted PM of Pakistan makes bold statements on India, America and even himself. What did Khan say?

The last time a phrase by former Pakistan PM Imran Khan caught everyone's fancy was when he said ghabrana nahi hai. This became a meme all over Pakistan and India. Now, Kaptaan’s new catchphrase for his supporters is "Imported government na manzoor (Imported government will not be accepted)". Khan called out to his supporters to hit the streets and not rest unless the dates for new elections are announced.

In his first speech since being ousted from the PM's office, Imran Khan had a changed tone. He was unapologetic and aggressive. But in his speech, Khan went on to make some bold statements; something quite a U-turn from when he was the PM.

Here are three statements that stood out from Imran Khan's first speech since losing his chair: 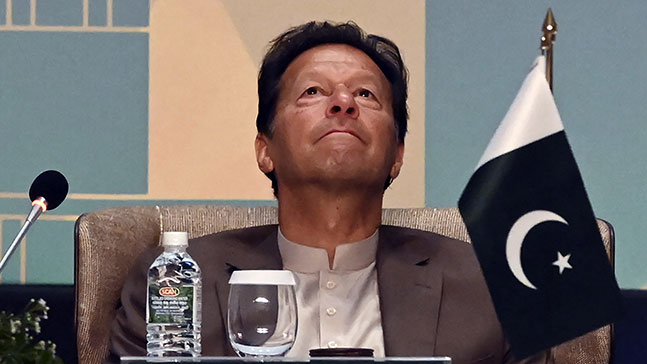 "Americans hame tumhari maafi ki zaroorat nahi hai (America, we don’t need your forgiveness)," Imran said from the rostrum to his supporters. Until now, Khan said everything he had to about a 'foreign conspiracy', but stopped short of uttering the word 'America'. Imran said that kit wasn't the same Pakistan where America forcefully got General Zulfiqar Ali Bhutto and hanged him, and the thieves (Sharif family) helped them. Khan called it 'Naya Pakistan'.

2. THE DIG AT INDIA AND ISRAEL

As PM of Pakistan, Khan was soft on India. In fact, in his last address to Pakistan, he called Indians khuddar qaum (esteemed people), the ones whom nobody can dictate terms to, in context of the Ukraine-Russia War and India's neutral stand. Khan had praised India for keeping an open foreign policy and not being influenced by any country like America.

As for Israel, it's hidden from none that Pakistan and Israel have shared bitter relations for a long time. Imran’s tirade against Israel is understandable.

3. WILL BE MORE DANGEROUS Imran minced no words when it came to the Sharif family. He called the entire Sharif family thieves. He levelled a Rs 400-crore corruption charge against Pakistan PM Shehbaz Sharif. “Will we accept this man as PM?” Khan said. Khan said he was not dangerous when in power, but that now he will be more dangerous.

A calm and composed Imran Khan, who would always talk of mending relations with talks, has suddenly taken a U-turn. He is now talking of revenge. The coming months will reveal more of his traits as he begins his rallies in Pakistan to collate more support for his party.