Why India needs to remember a farmer forgotten by Modi government

It is not just individuals who get afflicted with the medical condition of schizophrenia. So do nations. Nothing manifested that better than the congregation of the super rich, their global affluence evident as their private jets swooped into the Swiss Alps at Davos, an annual bash of eclectic celebrity capitalists where India was supposedly doing a showstopper-walk, and the tragic suicide of Dharma Patil, an 84-year-old beleaguered farmer from Maharashtra who committed suicide amid the hustle-bustle of Mumbai's non-stop irrepressible energy. There could not have been a more apposite paradox to explain India's inherent contradictions. 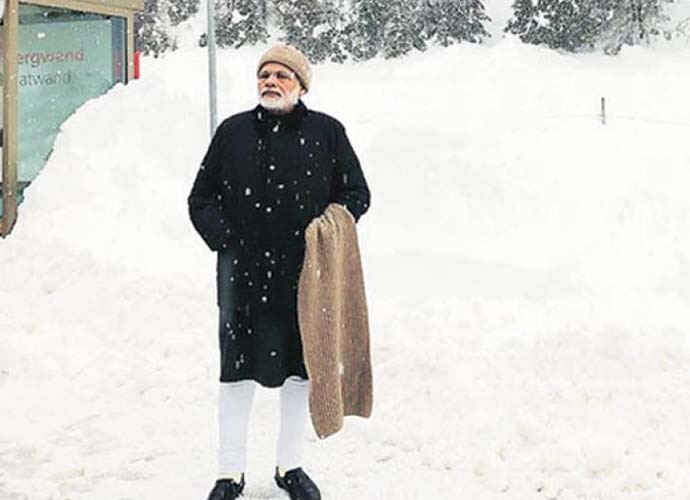 India's Prime Minister Narendra Modi made another of his highfalutin speeches to hard-sell India (even as India Inc palpably serenaded him on bent knees, despite the snow), but appeared blissfully unaware of some hard economic data that had surfaced concomitantly from the organisers, the World Economic Forum itself. India's ranking in the Inclusive Development Index had slumped to 62; an appalling commentary on the skewed policies of the last four years of Mr Modi's government which has increased social disparities. Not surprisingly, it seemed to synchronise with the astonishing fact that 1 per cent of Indians now owned 73 per cent of India's aggregate wealth. US President Donald Trump followed Modi to justify his America First pitch to the august gathering of essentially free-market fundamentalists. Like India, America has seen an escalating income inequality, ironically electing a tax-evading, anti-free trade, ultra-nationalist avatar in a billionaire businessman with a dubious track-record as its man in the White House. Politics is indeed weird.

Even as India's stock markets breached stratospheric levels crossing 35,000 levels prompting pink papers to go into uncontrollable euphoria, Dharma Patil lay dead at JJ hospital. The state government of Maharashtra had refused to respond to his several entreaties for help after it acquired his land for a pathetic pittance. It was unconscionable. The opposition blamed the government of Devendra Fadnavis for culpable homicide; in effect, it was callous nonchalance to a desperate cry for help. It was a stark reminder of one Gajendra Singh from Rajasthan who hung himself from a tree while an election rally proceeded with much fanfare in New Delhi. It was an ugly manifestation of a society that had forgotten its once revered creator of the rice bowl. Evidently, we have chosen to turn a blind eye to the hapless farmer, once deserving of a national call; Jai Jawan Jai Kisan. 84-year-old Dharma Patil who killed himself.

Arun Jaitley, India's Finance Minister, who famously declared that India will double farmers' income in five years, has been extraordinarily silent on his progress report. Perhaps that is understandable given that after four years of the Modi government , the average agricultural growth is just 1.9 per cent. To achieve the ambitious growth levels projected with profuse showmanship by the government, a minimum of 12 per cent is needed.

The target is ridiculously off the curve, but ask any policy wonk and he will tell you that it is always a preposterous kite-flying exercise. That begs the question, have we become so politically immoral that we make even suffering farmers dream of bountiful profits when in fact it is nothing more than a mirage, a chimera? Or are Indian politicians, once elected, decoupled from ground realities? In his farewell budget on February 1, 2018, Mr Jaitley made another grandiloquent claim; that his government had successfully provided for minimum support price of 50 per cent over cost-of-crop production as it had promised in its 2014 manifesto. It seemed like a stunning apocryphal story, because the definition of the cost of production had been deliberately left ambiguous. The convenient formula was adopted, but based on that measure, the farmers were getting 50 per cent over MSP since the UPA days. In that case, what was Modi promising during the 2014 election campaign? At the time of writing, very few in the mainstream media have even questioned this brazen inconsistency. Mr Modi also magnanimously laid out the red carpet for foreign investors citing India's charming hospitality and tranquil environs. But back home it was anything but. The release of Sanjay Leela Bhansali's Padmaavat was meshed in interminable controversies, and agitating Karni Sena supporters had become official non-state actors, as several BJP state governments happily catapulted to their intimidating threat to not release the controversial film. Chopping off heads of those who were related to the film was publicly broadcasted by these insidious hate groups, but the prime minister did not think a strong condemnation was necessary. Despite a scathing indictment from the Supreme Court, Rajasthan, Gujarat and Madhya Pradesh refused to screen the film, citing law and order risks. It was tantamount to acquiescing that they were incapable of ensuring governance, despite having the full police force under their authority.

The world could see the farcical melodrama turning violent, but India's elected leaders did not budge. What was once classified as right wing fringe was now a legitimate mainstream disruptor, courtesy official umbrage. Their poisonous footprint is on the rise, as punitive action has not been taken. At last count the film was headed for blockbuster box-office collections, and the Rajput community had not found anything offensive enough about it. So what was the purpose behind the belligerent posturing? And why did Indian politicians play ball?

But on the day of the hugely hyped budget, something remarkable happened. Even as Mr Jaitley gave his budget speech, from nearby Rajasthan, people spoke in collective unison, condemning both the wilful neglect of the farming community and the senseless mayhem over a commercial film. The BJP got a humiliating thrashing in two Lok Sabha and one assembly seat. The voters had seen through their forked tongue that sells stardust dreams even as it deliberately ignores solving the real issues. February 1 was a reminder that Indian democracy was still alive. And that Dharma Patil's death would not be forgotten.

Also read: How Arun Jaitley has punished taxpayers through his five Budgets