Modi at Red Fort: With his word-bank drying, the PM delivered yet another election speech

Ever since his nomination as BJP's prime ministerial candidate in September 2013, and later as the star campaigner of the BJP and then the Prime minister of India, Narendra Modi has always been in election mode. From the Red Fort to election campaigns in states, inside Parliament and at the international stage, the content of his speeches is mainly aimed at winning elections. His last address as the prime minister of the present government from Delhi’s Red Fort was nothing different.

The only difference from his previous speeches at the Red Fort was his body language and energy level. Unlike his usual self, the energy level today was way down. The PM was not looking confident enough compared to his previous speeches. Nor was the attire — the tie-and-dye saffron-red headgear arranged in Jodhpuri style and white kurta with churidar pyjama were unable to make him appear more vibrant and fashionable enough. He looked bulky and unfit. 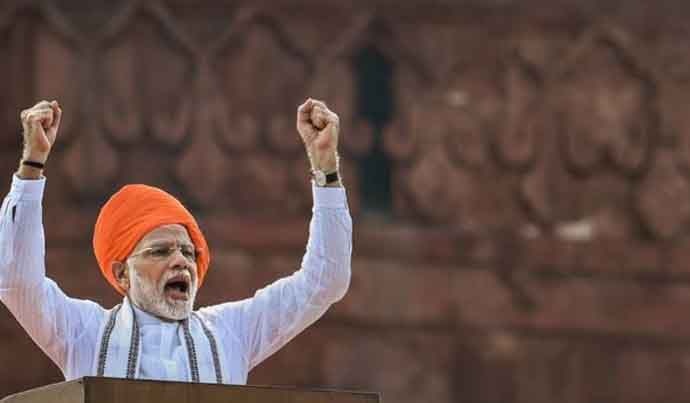 The Prime Minister failed to live up to his own standards. (Credit: PTI photo)

Despite the whole narrative based on the comparison between 2013 and 2018, the "illusion factor" was missing. The Prime Minister failed to live up to his own standards of illusion and attraction that he had set through his previous speeches. It was rather a safe-siding speech which was a fine attempt, but only for the purpose of an official press release — feel good and positive.

Far from his typical attacking style, the PM was defensive in his speech. He smartly evaded questions and issues which could have made him uncomfortable and invited debate, attacks from the Opposition.

The PM, who brought in the Balochistan question to his previous speech from the same spot, didn’t even mention Pakistan this time. Despite knowing the fact that the neighbouring nation is going to witness the oath-taking of a new prime minister, whose policies and attitude towards India would be very crucial in the days ahead.

He also redacted terms like mob lynching, cow vigilantism, Dalit atrocities, NRC, clean Ganga, farmer suicides, inflation and many more 'uncomfortable' issues. He proudly told that India’s status at the international stage has improved considerably but skipped elaborating how it has helped India’s position in terms of security, trade and investment.

The PM pretended the speech was the report card of his four years in office. However, this report card is based on self-appraisal and no data to support it. He talked about Minimum Support Price (MSP) for farmers and doubling their profit, but didn’t utter a word about the agrarian crisis and farmer suicides.

He talked about more manufacturing in India, but didn’t give any data to support his promise of generating millions of jobs. Minorities were reduced to his commitment for the Triple Talaq Bill that is still pending in the Upper House. The sacrifice of soldiers was reduced to the success of surgical strike.

He said that no one is above law and order. However, there was no warning to the mobs targeting minorities and Dalits, no sorrow for the loss of lives caused by vigilante groups.

PM Modi continued to mention the toilets and electrification done in the past four years. He praised the achievements of scientists for their space missions, advocated capital punishment for the rape accused and elaborated that India is the second-largest fish-producing country in the world. However, beef export was a safe skip, again.

To cash in on the quota issue, he started his speech with its mention but didn’t give any justification for the promotion of the judge who diluted the SC/ST Act. The Northeast was one of the focal points of the PM’s speech this time. And so was the U-turn on Kashmir, surprisingly.

With the youth of India. Their smiles, warmth and positivity are a source of great strength. #IndependenceDayIndia pic.twitter.com/EMCmhV8RIw

He advocated former PM Atal Bihari Vajpayee’s vision on Kashmir — something Mehbooba Mufti kept asking him and his party to invoke as the alliance partner in the state until they parted ways.

It seems the PM has nothing new to offer — his speech is just a repeat of his previous speeches. He has been reheating the same tea from the same tea pot and serving it to the people of India. With the illusion fading,  the focus now seems to be on new acronyms and catchphrases that he must be coining for the official election campaign period.