The speech made an impact because the Prime Minister's claims were backed by impressive and undeniable figures.

Claiming that his government has already achieved things which had not been achieved in the past 60 years, Prime Minister Narendra Modi laid the future roadmap before the nation in the last Independence Day speech of his current term. 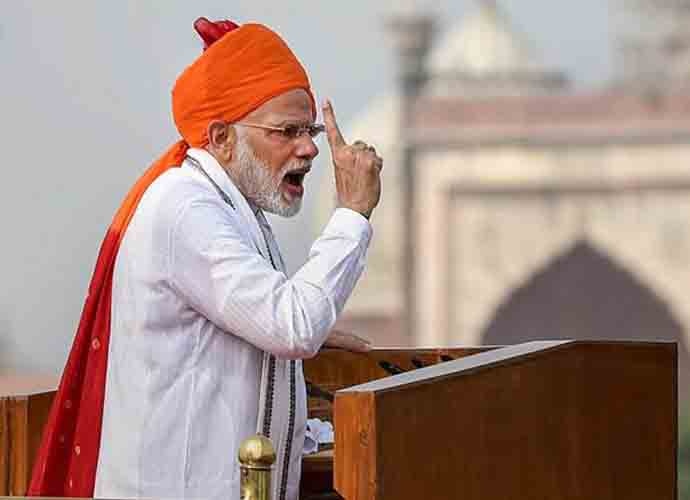 Way ahead: Narendra Modi claimed he has done in four years what other governments couldn't do in 60 years (Source: India Today)

The speech was laced with catchy Hindi prose and poetry and touching, sensitive one-liners that were aimed at setting the agenda for the 2019 Lok Sabha polls.

The speech had a lot of emotional content aimed at moving the voter ahead of the 2019 polls. But it was free from sabre-rattling as seen in his speeches in the past on the issue of Pakistan. He also refrained from rattling the issue of illegal residents in Assam, a topic that is being debated across the country since the National Register of Citizens (NRC) was released. In that sense, his speech was mature and steered clear of stoking controversies, though many of his supporters felt he should have spoken, and that too, boldly on these issues.

Though the Prime Minister touched every section of society in his 82-minute speech, ranging from women to security personnel and Kashmir to the Northeast, his main emphasis was on the work his government has done for the elimination of poverty and bringing honesty and transparency in the administration.

It made an impact because his claims were backed by impressive — and undeniable — figures. He said because of his drive to bring transparency and economic reform, the number of direct taxpayers has increased from four crore to 6.75 crore and the indirect taxpayers' base has risen from 70 lakh to 1.17 lakh crore in just four years, drawing a comparison between the work done in the past 60 years with that accomplished in his own term.

He laced these figures with a series of examples on how benefits of his schemes meant for the poor were reaching the very last beneficiary as his government had wiped out middlemen from the delivery system through technology and an unwavering commitment to transparency.

The country was saving Rs 90,000 crore per year due to the efforts of his government to bring about transparency, he said.

Modi said his government had initiated a festival of honesty ('imandari ka utsav') where the honest feel empowered and the corrupt fear the law. "We have thrown out the middlemen and 'Katki Company' (middlemen who get illicit cuts due to corruption in the system) from the corridors of power and ended the atmosphere of 'Bhai-Bhatijawad' (nepotism)."

He also underlined that a record three lakh shell companies which were keeping the cycle of black money going had been closed.

The figures he reeled out on poverty elimination were equally impressive. He said a report says that about five crore people had risen above the Below Poverty Line (BPL) bracket in the past four years.

Claiming that when he launched the Swachh Bharat Mission in 2015, some people mocked him, he said that a World Health Organisation (WHO) report said that the lives of 3 lakh poor children had been saved in India since the launch of Swachh Bharat.

He said his government had made unparalleled strides in the sector of housing for all, cooking gas for all, water for all, sanitation for all, skills for all, health for all, insurance for all and connectivity for all, thus drawing before the nation his government's inclusive approach.

Referring to the Triple Talaq Bill, which is still pending before the Rajya Sabha, Modi said that he was committed to ensuring justice to his Muslim sisters and daughters and won't rest till he achieves this objective.

India's technological advancement and its enhanced reputation on the international turf after his coming to power repeatedly figured in his speech as he said, 'The value of the Indian passport has increased many times over' and then announced that in 2022, India will become only the fourth nation in the world to have a space vehicle capable of sending every Indian to space. He went on to congratulate space scientists for the achievement.

Our scientists have a valuable contribution in India’s progress. pic.twitter.com/RueRrkBpCa

A major part of the speech was devoted to farmers and the progress made in the agricultural sector. He stressed on the need for the farming community to adopt new technology looking at global challenges and his resolve to double farmers income by 2022, making India a centre of agri-export.

He said his government believes in reform, perform and transform, and added that India was on the road to high economic growth.

Modi also said that no relief in the tax structure was on the way for taxpayers as it was through the money collected through taxes that he wants to eliminate poverty.

He credited "honest taxpayers" for being a part of the poverty elimination process, promising that he will not allow the money to be wasted as had happened in the past. Firm stand: Modi said he is committed to ensuring justice to his Muslim sisters and daughters (Source: India Today)

He said, for him, the pride of the people, especially the poor, was supreme and his government was toiling hard to empower the poor by keeping their pride intact.

On women's empowerment and welfare, the Prime Minister said his government had been recruiting women officers in the army through the short service commission. He described rapists as demons and asserted his government was committed to putting the fear of the law in the minds of such people.

He cited the examples of BJP governments in Rajasthan and Madhya Pradesh where rapists got death sentences within a few days of crimes occurring, because of the strong stand taken by the two state governments.

The end of his speech was both emotional and dramatic.

Using a series of analogies, he said he was 'impatient' when it comes to the progress of the nation and was eager to see the day when India tides over monumental problems like poverty and corruption, to become a great nation.

#National register of citizens, #Narendra modi speech, #Narendra Modi, #Independence day 2018
The views and opinions expressed in this article are those of the authors and do not necessarily reflect the official policy or position of DailyO.in or the India Today Group. The writers are solely responsible for any claims arising out of the contents of this article.