1962 war: When Nehru decided to strike against China despite Army chief's advice

It was not timed to coincide with the Cuban missile crisis.

Some recent articles on the 1962 border war with China by a few eminent commentators have suggested that the Chinese attack was timed to coincide with the Cuban missile crisis, at a time when the US was militarily pre-occupied, as much to take advantage of it as also to put pressure on the US. Facts do not support this.

Fifty-five years is a long time ago, but it seems that we have not grown enough as a nation to see facts as they are and not be swayed by archaic and sentimental notions of patriotism, and of the country never being wrong.

After the Chinese surrounded the small Indian Army post at Tsenjang, north of the disputed Thagla Ridge, on September 8, the then defence minister VK Krishna Menon overruled the advice of the Army chief, General PN Thapar, and ordered the army forward. The Indian Army still balked and stayed put.

On September 30, Prime Minister Jawaharlal Nehru, just returned from a foreign trip, became furious that the government's orders were not implemented. He overruled Thapar's advice again and shouted, "I don't care if the Chinese came as far as Delhi, they have to be thrown out of Thagla!"

On October 17, 7 Brigade reluctantly began an attack to dislodge the Chinese from Thagla. The Americans only discovered Soviet missiles in Cuba on October 14 and ordered a blockade on October 22. The Chinese and Russians were at loggerheads since 1959 and it is extremely unlikely that the Russians would have taken them into confidence on putting missiles in Cuba. Quite contrary to widely prevalent belief, India initiated military action and the decision was an independent one. Doubly independent, for foolishness of such magnitude also requires independence from reality.

Having beaten back the Indian attempt to dislodge them at Thagla, the Chinese counter-attacked across the Namka Chu River on October 19. By October 23, the Chinese PLA's force of about three regiments had trounced the Indian Army's 7 Brigade commanded by Brig John Dalvi (taken prisoner), and was within ten miles of Tawang. On October 24, the PLA entered Tawang unopposed.

That night, they also began concentrating opposite Walong at the other end of NEFA. Both Tawang and Walong were deep inside NEFA. Even in the western sector, despite a determined stand made possible by the deft handling of resources by Lt Gen Daulet Singh, the Chinese had by and large occupied all that lay within their claim line by October 21. There was a lull in the fighting in all sectors after this.

On October 24, the Chinese issued a statement that after the predictable recriminations made three proposals.

On the same day, a statement was issued by New Delhi rejecting these proposals.

On November 4, Chou En-lai wrote to Nehru, commending the Chinese proposals, and urged Nehru to accept them. Nehru countered with a proposal on November 7 that the Chinese should return to the positions they held on September 8, and that talks would follow after this was complied with.

During this period of renewed diplomatic skirmishing, there were two major developments. The Russians backed down over Cuba on October 28 and agreed to withdraw their missiles.

On October 29, the US ambassador, John Kenneth Galbraith, called on his friend Jawaharlal Nehru and offered "any military equipment India might need". This started arriving within five days and soon, there were as many as eight USAF and RAF flights a day, each disgorging 20 tonnes of hardware.

Ironically, only a few weeks before this, Nehru, while rejecting a suggestion of India seeking western arms aid, equated the acceptance of military aid with joining a military bloc and declared that India would never accept this "even if disaster comes to us on the frontier".

The disaster that visited the 7 Brigade was a small one compared to what was to visit the 4 Division in November.

The lull that followed the quick Chinese advances to Tawang and Walong and the gates of Chushul, instead of causing the national leaders to introspect and inject some realism in them, took them on new flights of fancy. The defeats gave rise to a wave of jingoism and euphoria seen only once since, during the Kargil conflict. The Lok Sabha praised the "wonderful and spontaneous response of the people of India to the emergency".

Ram Manohar Lohia, who always had a way with words, said: "The blood of our martyred jawans is becoming the seed of a new, virile nation that is being born in our country."

Little wonder then that Nehru commented: "We never had it so good." 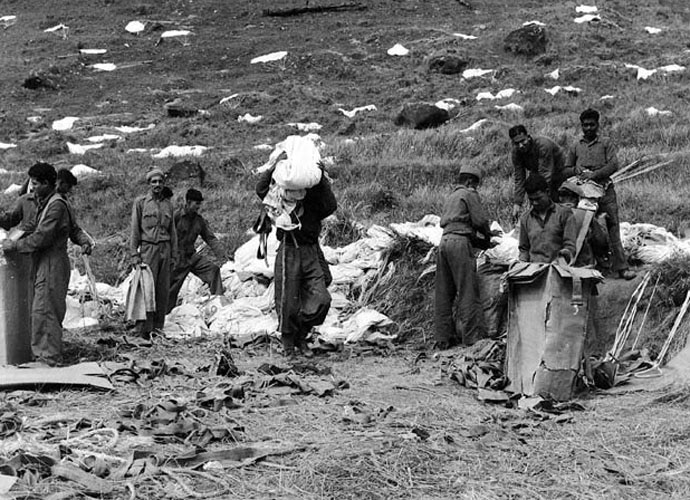 The jawans fighting at heights of 12,000-14,000 feet had only cotton tunics and one blanket each to fight off the cold. Photo: India Today

Instead of taking stock of what went wrong on the run-up to the stinging defeat at Namka Chu, our leaders persuaded themselves that we could beat the Chinese back. The decision that was to send 7 Brigade into dubious battle was taken by people at the highest level, overlooking all advice of commanders on the frontline.

The massive airlift of western small arms did little to change this reality. Instead of seeking a respite and allowing the military leaders the option of choosing the time and place for the next battle, the politicians, both in Parliament and in the Indian Army, pressed on for another round.

After the initial debacles in NEFA, Lt Gen BM Kaul, who was hastily appointed commander of the newly created IV Corps, had returned to his familiar battlegrounds in New Delhi stricken with pulmonary edema.

Lt Gen Harbaksh Singh took over from him. Singh, after studying the changed tactical position of his troops, decided that the next point of defence would be Bomdila. But Kaul, now recovered, replaced him after hardly four days. Kaul returned with the DMO, Brig DK Palit, in tow.

Palit, who later wrote a somewhat self-serving yet eminently readable book on the 1962 war, was a favourite of Kaul and a man quite well-versed with the functioning of the Delhi durbar.

Palit had earlier commanded the now ill-fated 7 Brigade and could claim intimate knowledge of the terrain.

Military logic, given the availability of troops and supplies, demanded that they be concentrated in Bomdila. Factoring this, the Indian Army's three-tiered defence plans for NEFA, prepared in 1959 by Lt Gen Thorat, called for at least four brigades.

In 1961, Lt Gen LP Sen, who took over the Eastern Command from Thorat, determined that he would need two divisions or six brigades to do the job. After the debacle at Namka Chu, 4 Division had only two brigades to do the job. But Kaul and Palit, fresh out from New Delhi, put out the word that Se La, which was a good 60 miles ahead of Bomdila and nearer Tawang, must be held. The politicians could not afford its loss.

November 14, 1962 was the prime minister's 73rd birthday and Kaul, ever conscious of the import of such events, wished to make a befitting present. He launched an attack in the Walong sector to push the Chinese back over to the other side of the McMahon line.

This was probably the stupidest order he was to ever give.

The PLA had a full division lying in wait at Rima while the Army's new 2 Division just had three battalions, designated 11 Brigade at Walong. The PLA retaliated massively. 11 Brigade fought bravely but was all but wiped out by November 17, even as newspapers in Delhi were hailing the attack!

The decision to confront the Chinese at Se La led to the thinning of forces at Bomdila, which was now defended by just six companies. Kaul and Palit did not envisage the possibility of the Chinese bypassing Se La in any great strength. But this is just what they did.

They took the path known as the Bailey Trail, named after the British officer who rediscovered the traditional Yak herder's route to Tawang. 4 Division with its main defence centred in Se La was much too thinly spread, and the PLA began hacking at its rear.

By the time orders went out for 62 Brigade to evacuate Se La, it was too late. They were cut off and the commander, Brig Hoshiar Singh, fell fighting on November 17. The next day, the divisional headquarters at Dirang Dzong, between Se La and Bomdila, fell. On November 20, Bomdila fell. The rout in NEFA was complete.

Jawaharlal Nehru made a broadcast to the nation that night. His broadcast had a special place for the people of Assam. He said: "Huge Chinese armies have been marching in the northern part of NEFA. We have had reverses at Walong, Se La and today Bomdila, a small town in NEFA, has also fallen. We shall not rest till the invader goes out of India or is pushed out. I want to make that clear to all of you, and, especially our countrymen in Assam, to whom our heart goes out at this moment."

Later that night, Nehru made an urgent appeal to the US to intervene with air strikes against the Chinese on Indian territory. Mercifully, the Chinese announced a unilateral ceasefire on November 21.

#Cuban missile crisis, #1962 War, #Indo-China relations
The views and opinions expressed in this article are those of the authors and do not necessarily reflect the official policy or position of DailyO.in or the India Today Group. The writers are solely responsible for any claims arising out of the contents of this article.