What’s at stake in latest India-China border row in Sikkim?

It also indicates the continuing deterioration of bilateral relations between the two Asian giants.

The standoff between Indian and Chinese forces in the Doka La tri-junction area indicates the continuing deterioration of bilateral relations between the two Asian giants over the past two years.

The current series of incidents dates back to the first week of June. At its heart lies Chinese road-building activity in a strategically significant region near the Chumbi Valley, which is around 500km from the Siliguri Corridor, which connects mainland India to the Northeast along with Nepal to Bhutan. The area is also part of a long-standing territorial dispute between China and Bhutan.

Beijing says that its construction activity is legitimate, given that its claim over the region is “indisputable” and has a historical basis. The Chinese foreign ministry has also hit out at what it sees as “third party” intervention in what is a dispute between two sovereign nations.

Bhutan, however, does not have formal diplomatic relations with China and deals with Beijing predominantly via the Chinese embassy in India. Indian forces, located in the region, also play a critical role in training and assisting Bhutanese troops, with collaboration on security and external affairs historically being important components of ties between Thimphu and New Delhi. 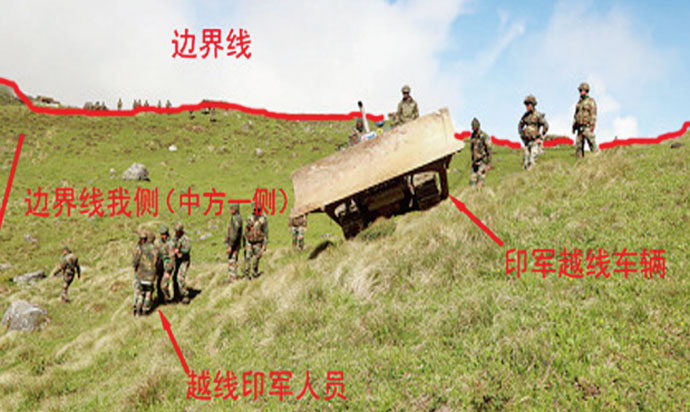 Beijing has released these photos as proof that Indian troops have trespassed the country's boundary.

In response to the series of events, the Bhutanese government, on Wednesday, lodged a formal protest with Beijing. Calling on China to “stop the work immediately,” Bhutan’s ambassador to India Vetsop Namgyel stated that “Doklam is a disputed territory and Bhutan has a written agreement with China that pending the final resolution of the boundary issue, peace and tranquility should be maintained in the area.”

India and China are no stranger to border face-offs. Periodic spats have been a feature of activities along the Line of Actual Control - the 3,488-km-long effective border between the two nations. Given the two countries’ differing perceptions when it comes to the LAC, there have been regular reports of border "transgressions". What adds a layer of complexity to the scenario is the ambiguity around the perceptions of each side. This is in part a matter of design, which perhaps can be mitigated to a certain degree by sharing of maps.

However, despite New Delhi’s requests to do so, Beijing has not been forthcoming.

The two most-prominent recent incidents of such tensions along the LAC were the 2013 Daulat Beg Oldi and 2014 Chumar sector standoffs. The latter, in fact, had occurred as Chinese President Xi Jinping was set to arrive for his maiden visit to India. Often such incidents are viewed in India as timely activation of tactical pressure points by the Chinese side or localised events, wherein responsibility tends to lie with local commanders.

However, the current series of events unfolding in the Doka La are distinctly different. For starters, it appears that Beijing’s decision to press India along Sikkim hasn’t come out of the blue and neither is it a local command decision. The first public indications of Beijing’s approach can be witnessed in Chinese ambassador to India Luo Zhaohui’s remarks at the United Service Institution in May 2017. Outlining a four-point roadmap for improving Sino-Indian ties, he’d referred to the possible demarcation of the Sino-Indian border in Sikkim.

For the record, China, in 2003, recognised Sikkim as a part of India and repeatedly Chinese officials have acknowledged that the boundary in this area was negotiated under the Anglo-Chinese convention of 1890. While India since the time of Jawaharlal Nehru has asserted that the boundary so negotiated was also demarcated in 1895, the Chinese side has historically been wishy-washy on that.

Added to this, the public diplomatic effort that China appears exerting at the moment indicates a clear design. Reports of border transgressions with regard to the LAC are not often documented and highlighted across Chinese state media outlets, even if the relevant issue is mentioned in the routine foreign ministry briefings. However, the current spat has been well-documented across all major state media platforms and has also been allowed to resonate on tightly controlled social media in the country.

What, however, is most significant about the current spat is the involvement of Bhutan. Beijing has, over the years, made overtures to settle the territorial dispute between the two countries as part of a package deal. It’s a deal that involves Thimphu giving up the Doka La area. The proposal has been available as an option since 1996, but has not gone far given the strategic and security components along with concerns of populations in the border areas.

In this context, the current situation indicates a two-fold effort by Beijing. The first is to outline India as diplomatically a “third party” and then pressure Thimphu into allowing a Chinese embassy and establishing formal diplomatic ties.

The second, a desire to alter ground realties, which would end up making a settlement in its favour a foregone conclusion.

None of these outcomes would augur well for India.

Post your comment
#LAC, #Bhutan, #Sikkim, #India-China Ties
The views and opinions expressed in this article are those of the authors and do not necessarily reflect the official policy or position of DailyO.in or the India Today Group. The writers are solely responsible for any claims arising out of the contents of this article.