Why the PLA is posturing at the LAC

Chinese troops have ingressed at four major points while Beijing has laid claim to the entire Galwan Valley.

The ‘heart of the matter’ between India and China border tensions, as a miffed MEA spokesperson noted on June 25, is the massive military mobilisation by PLA along the Line of Actual Control (LAC). The deployment, the largest since the 1962 border conflict between the two countries, has seen two Chinese mechanised divisions including self-propelled artillery, tanks and light armoured vehicles strung along the LAC. 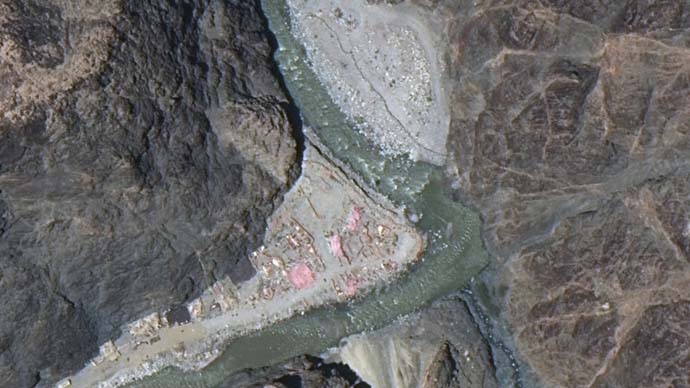 The Chinese have a large spread of tents and storage starting very close to the point of conflict. (Source: Satellite image ©2020 Maxar Technologies)

Chinese troops have ingressed at four major points while Beijing has laid claim to the entire Galwan Valley. This deployment — meant to block Indian military attempts to clear the intrusions — has shredded the agreement. On June 15, a clash on the LAC saw 20 Indian soldiers and between 14 and 38 PLA soldiers killed. An Indian counter deployment has five infantry divisions — over 60,000 troops backed by tanks, infantry combat vehicles, fighter aircraft and helicopter gunships. The PLA’s disposition, however, has puzzled military analysts. They are not ‘tactically deployed’. They aren’t dug into defensive positions or spread out as they would be in a full-scale war. The PLA hardware is in the open where they can be observed by drones and satellites. None of the guns or tanks seems to have more than first-line ammunition. Each gun would need at least 250 shells of first-line ammunition (what is carried by the unit in routine operational deployments). An offensive would need four lines of ammunition; over 1,000 shells per gun per day. “The PLA is for muscle-flexing,” says Lt General P Ravi Shankar, former Director-General Artillery. Can this force be deployed to attack Indian positions? Unlikely, say experts. “They are not planning any great offensive but they are prepared to fight,” says Brigadier Kuldip Singh, former Principal Military Adviser in the NSCS. The Indian deployment forecloses that option. Ratios favour defenders in the mountains. With the evenly matched forces ruling out a limited border skirmish, this stalemate could last at least till winter sets in.

Also read: Why China's aggression in Galwan may backfire