As a first step towards making China pay a heavy price for her misdeeds, India must recognise Tibet as an independent state that has been occupied by China.

China is the only country that has expanded its borders in the 21st century. Her armed forces called the People’s Liberation Army (PLA) are further claiming and forcibly occupying territories belonging to neighbours since the past eight decades.

Analysing the PLA behaviour over these eight decades, especially in the occupied territories of Tibet and East Turkestan, the ‘PLA’ sounds like an oxymoron. Their actions are neither for the people nor for liberation. The PLA’s recent belligerent and aggressive occupation of Indian territories, beyond even their own claim line, are examples enough to understand the Chinese Communist Party’s (CCP) expansionist era has just begun.

Recent Chinese occupation of Indian areas in Eastern Ladakh at most places even beyond their claimed line suggests that the PLA intends to teach India a lesson for claiming Indian areas presently under Chinese occupation. Military-level talks have failed to yield any positive results as Chinese PLA refuses to disengage at Pangong Tso and de-escalate at other places. Many experts even indicate that China is possibly preparing for an all-out war with India. As a first step towards making China pay a heavy price for her misdeeds, India must recognise Tibet as an independent state that has been occupied by China.

The Chinese have controlled Tibetan and East Turkestan population by subjugating them with religious atrocities. 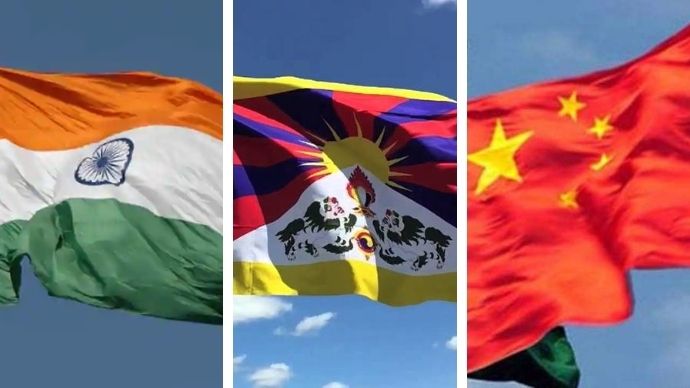 India must seize this chance to bail Tibet out of China's clutches. (Photo: Reuters)

The Chinese pushing Han population into these areas and plundering the rich Gompas and Monasteries is not new. The recent satellite images have clearly indicated that China — scared of Indian use of its air force across the Himalayas — has started constructing surface to air missiles (SAM) locations ready for deployment within days. This time Beijing has crossed the red line by deploying SAM at the northeastern corner of Manasarovar — barely a km from it. Surprisingly, this SAM location does not have any assets to defend. The aim is to hit India where it hurts the most. It can only be done by PLA creating a new battlefield at the feet of Lord Shiva’s abode, the Mt Kailash.

The Chinese PLA has been preparing for an all-out war encompassing entire India. China has moved in more than four Group Army (GA) worth troops all along India’s borders especially around Eastern Ladakh. Although disengagement has taken place at three of the four places of incursions, the PLA is not budging from Finger 4 area of Pangong Tso in Eastern Ladakh. The de-escalation has not taken place at any of the locations and both countries obviously are locked in a standoff despite Chinese promises to the contrary during military commander level talks.

China’s PLA has hastened the ship constructions at most of the naval shipyards. The two Type-75 landing helicopter dock (LHD), third aircraft carrier, and many Type-52s and Type-55s in various stages of production are being speeded up. The recent exercises with civil ships taken up from trade (STUFT), including the one being used as an LHD, Zhenhua-28 carrying PLAGF helicopters, Z-8 transporters and Z-19  attack helicopters indicate preparations for a sea assault base. The PLAAF deployment of H-6 bombers and J-20 stealth aircraft very close to Indian borders are also clear battle indications of Chinese preparations for war.

War not an option for India

A war with China at this stage of the economic unsettlement due to the pandemic does not suit India. Though the Indian armed forces are modern and strong, a war effort would throw the country back by several decades in every sphere. On the other hand, China gains the most-wanted experience for its armed forces, especially their air and naval forces that have not seen action ever since raising. China also gets a chance to try and test their new weapon systems and missiles against a strong and well-equipped army. It would be a precursor for preparations against the USA, which it plans to confront sooner or later in the South China Sea, while undertaking ‘peaceful’ reunification of Taiwan.

Hence India needs to avoid an all-out war by having brief yet intense skirmishes and fan out its options to get out of this quandary. India must delve deeper into out-of-the-box options that are within the international community’s powers to support us very strongly to gain ascendency over China morally.

Indian areas under Chinese occupation to be freed

Many Indian territories like Eastern Ladakh’s Aksai Chin were occupied by China in the 1950s and must rightfully be claimed by India. The Indian government must ask for all the Indian areas under Chinese occupation, including Eastern Ladakh, Shaksgam Valley and Kailash Manasarovar through proper diplomatic channels. The land records and economic taxation records could be provided, only if caught, by Chinese authorities. India must also file this case in international courts for returning all Indian territories, including Sharsingma (Yadong) valley, Tsona and parts of East Turkestan, based on the Ardagh-Johnson Line.

India must seize this chance to bail Tibet out of China's clutches. Tibet has a written history of over 2,150 years when China has never ruled over them. The aim of providing shelter to HH the Dalai Lama and Tibetan community in India was to ensure their freedom at the earliest. India must recognise Tibet, including the Tibet Autonomous Prefectures (TAPs), as a sovereign and independent state that is now occupied by China. India must ask the international community to follow suit in this regard, to ensure Tibet is liberated at the earliest. This is the opportunity that India cannot afford to lose.

Also Read: Why it is now time for India to play Tibet and Taiwan cards against China

#Chinese expansion, #People's liberation army, #India china face-off, #Tibet
The views and opinions expressed in this article are those of the authors and do not necessarily reflect the official policy or position of DailyO.in or the India Today Group. The writers are solely responsible for any claims arising out of the contents of this article.