India-China Face-off: Not the time to distrust the Prime Minister

The citizenry, media and political class must not indulge in unnecessary mud-slinging to create instability. Instead, the whole country should strengthen the resolve of politico-military leadership to secure national sovereign territory.

The conflict along the Line of Actual Control (LAC) is a step-by-step walk of a thousand-mile road that India needs to traverse with patience and resolve. This conflict can neither be resolved in a year nor in a decade. This is not a problem that was created yesterday, but a legacy of the history of over 70 years. India has bridged the geographical fault lines along the LAC and caught up with the infrastructure development made by China along the LAC in Eastern Ladakh and Aksai Chin area.

China considers the development of infrastructure along LAC by India as a threat to its exterior lines of communication between Tibet Autonomous Region (TAR) and Xinjiang Province. In view of the foregoing, this year China changed the rules of border management and created a situation out of the ordinary by amassing large forces along the LAC. But this move did not deter the troops on the ground and India continued infrastructure development even during the standoff. It is reported that on June 18, 2020, Indian Combat Engineers completed a 60-metre long bridge over Galwan River to provide sharper access to troops to the contested areas. 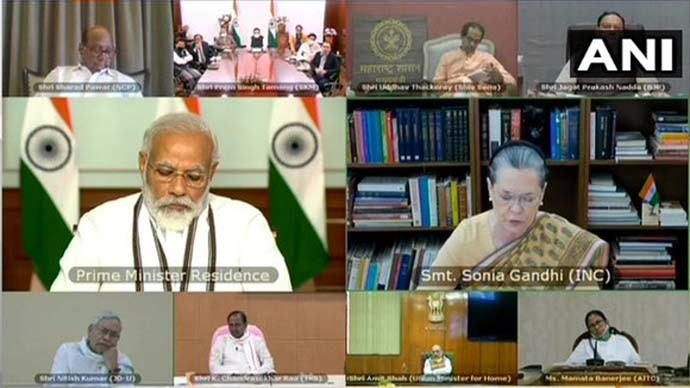 Prime Minister chairing the All Party Meeting on the situation at LAC. (Photo: ANI)

We sometimes succumb to unhealthy political debate even on issues of national security. It is unwise for a political leader to make war rhetoric without making efforts to avoid it. The first priority for any political leader is to prevent and dissuade an adversary from waging a war. Strategic wisdom suggests that the first reaction of a political leader should be reconciliatory even under extreme provocation.

Therefore, the response of the Prime Minister post the All Party Meeting (APM) was measured and not alarmist in nature. He is also conscious of the fact that if there was any infringement to the LAC by Chinese People's Liberation Army (PLA), it cannot be hidden for long. He has the trust of the men on the ground that they will not allow occupation of sovereign land even at the cost of their lives. 20 men led by the Commanding Officer laid down their lives in the line of duty by displaying that no one should have any doubt about the resolve of men and their leaders on the ground to defend every inch of the Indian territory. The political and military leadership is clear that troops and commanders on the ground will take appropriate actions — including kinetic — if need be, to defend own territory.

We might have simmering anger over being betrayed by an untrustworthy adversary. But the political leadership must not let it be known to the public. It is a sign of poor strategic communication. The basic principle of leadership is that if you wish to control others, you must first control yourself. This is what a responsible political leader must do. Thus when the Prime Minister speaks, he speaks with responsibility and accountability.

If the Prime Minister declares that there are no Chinese troops on the Indian side of LAC and there is no post of India under the occupation of China, it does not mean that if PLA tries to make any aggressive move, India will not respond. The Prime Minister has not asked forces to lower the guard, nor has he asked them to step back. Military actions are the responsibility of the Armed Forces. Political leadership has allowed the forces to be prepared if there is escalation along the LAC. The citizenry, media and political class must not indulge in unnecessary mud-slinging to create instability. Instead, the whole country should strengthen the resolve of politico-military leadership to secure national sovereign territory.

What is of utmost priority at this stage is to de-escalate, and slowly but steadily fill the operational gaps, especially to fight the Three Warfares (3W) Strategy of China — psychological operations, media manipulation and lawfare. In this context, our internal audience nitpicking with the semantics of Prime Minister’s remarks by taking them out of context is best avoided.

Second, there must be no let-up in building infrastructure and military capabilities both — kinetic and non-kinetic — since China has once again betrayed India even after having elaborate Confidence Building Measures.

Third, there is a need to integrate and create mechanisms that can coordinate the battle of narrative to respond effectively without wasting much time, so that Ministry of External Affairs and Military complement each other in dealing with the information warfare of China. It must not be reactive, but proactive in nature and content.

Fourth, what the government should be wary of is choreographed negative debate and insinuation of institutions by Chinese proxies operating from within to weaken the resolve of the government and military by depicting fragmented polity and society. This has been the trademark of 3W and non-contact warfare of China, to create division within the state and society. Chinese state and intelligence agencies have been indulging in such shadow warfare for some time and certain elements within India could be manipulated by Chinese intelligence agencies.

No individual or political party would have the overall picture as clear as the Head of the State. Therefore, let us all trust and strengthen the hands of the politico-military leaders at this crucial juncture. We as a nation collectively need to rationalise our energies, or else we may land up weakening ourselves morally to fight a shrewd and untrustworthy adversary.

Post your comment
#Chinese aggression, #PM Narendra Modi, #Ladakh incursions, #Indiachinafaceoff
The views and opinions expressed in this article are those of the authors and do not necessarily reflect the official policy or position of DailyO.in or the India Today Group. The writers are solely responsible for any claims arising out of the contents of this article.

The writer is Distinguished Fellow, United Service Institution of India.