Taking on China: Why diplomatic resolution of the present crisis is India's best option

India Today Editor-in-Chief talks about how India has to maintain its territorial integrity but also has to tread carefully around China, in the June 29, 2020 edition of the India Today Magazine.

Winston Churchill’s well-known description of Russia at the start of World War II could well be true of China today. He had said: “I cannot forecast to you the actions of Russia. It’s a riddle wrapped in a mystery, inside an enigma.” As if it was not enough to spread the deadly coronavirus across the world, China has now engineered a conflict on its border with India in which 20 Indian soldiers were killed by their Chinese counterparts. It is the worst clash on the disputed India-China border in 53 years. The number of Chinese casualties, like much else in that country, remains unknown. It is also a mystery why China would provoke such an incident at a time when it is facing global opprobrium for having concealed the onset of the Covid-19 pandemic despite being well aware of its severity. Even as India battles the latest surge of the virus, it is having to engage in an eyeball-to-eyeball confrontation with its neighbour along the 3,448 km Line of Actual Control. The situation on the boundary hasn’t been this tense in decades. Ironically, just seven months ago, Prime Minister Narendra Modi and Chinese President Xi Jinping were on a beach at Mamallapuram, sipping tender coconut water and discussing the shared destinies of the two Asian giants.

To call the relationship with China a complicated one would be an understatement. China is India’s biggest frenemy — it is, after all, our largest trading partner, with bilateral trade worth over $92 billion last year. Despite the huge imbalance — China’s GDP is four times that of India and the Chinese economy is deeply intertwined with the Indian economy — the reality is that we are more dependent on China than they are on us. China’s share in India’s total trade is 10.4 per cent while the corresponding share of India in China’s trade is 2.1 per cent. For us to boycott Chinese goods may be emotionally satisfying, but we would also be cutting our nose to spite our face. 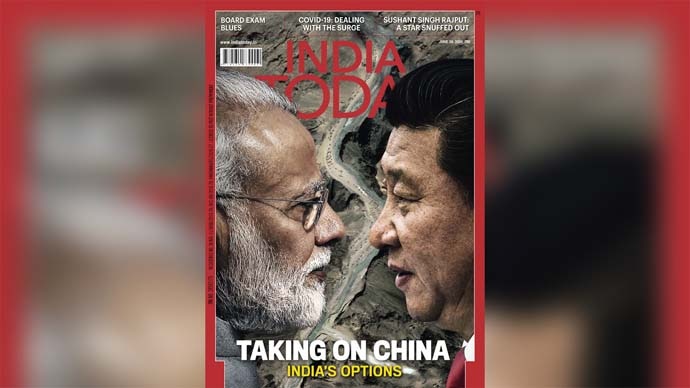 The fact that China is also our strategic adversary which has fought a war against us in 1962 and with whom we share the world’s longest contested boundary means it is the dragon in the room. No one understands this better than Prime Minister Modi. While he may have put Pakistan in the deep freeze, the prime minister has met the Chinese president more frequently than he has seen any other global leader — 18 times in six years. The engagement picked up after hitting a low — the tense stand-off at Doklam in 2017 — resulting in two ‘informal summits’ between the two leaders and an apparent cooling of border tensions.

This is why the Chinese intrusions across the LAC in May had the Indian political, diplomatic and military establishment shaking its head in collective disbelief. The incident took place even as the two opposing commanders had agreed to de-escalation in their talks. Perhaps the Chinese still follow the strategy of their ancient general, Sun Tzu, who said: “All war is based on deception.” The intrusions were dramatically different from the isolated instances of previous years. PLA soldiers came in far greater numbers, camped at multiple points and, finally, in a savage medieval twist, used spiked clubs to inflict grievous harm on our soldiers. Several reasons have been given for this renewed aggression. China had objected to the bifurcation of Jammu & Kashmir, claiming it violates boundary agreements; India insists it changes nothing on the LAC. The Indian Army is finally catching up with border infrastructure, building roads and bridges in remote border regions such as Ladakh, which has raised alarm across the border. Perhaps, it’s to humiliate India for not supporting Xi’s pet Belt & Road Initiative (BRI), or for not signing RCEP (Regional Comprehensive Economic Partnership) — the regional free trade agreement China’s keen on — or simply to cut India to size in the eyes of the world. Nobody knows the mysterious ways of Beijing. What is generally accepted is that they have a long-term strategic vision to become an unrivalled superpower, one they are pursuing relentlessly.

No wonder, Beijing’s belligerence on the boundary with India is not an isolated instance. A cursory reading of the headlines across Asia this week reveals a trend — PLA air force jets have intruded in Taiwanese airspace, China has increased pressure on Indonesia and Malaysia in the South China Sea and pursued Japanese fishing vessels in the disputed Senkaku Islands. The world not only has to grapple with the worst economic crisis in recent times but also deal with an aggressive, assertive China. There are no easy options in dealing with China, especially its president Xi Jinping, who in 2018 abolished the two-term limit, effectively ensuring he stays on as president for life like the powerful chairman Mao Zedong. All of India’s policy alternatives have to factor this reality in.

India has to maintain its territorial integrity but also has to tread carefully, as every path is fraught with risks. Our best option is a diplomatic resolution of the present crisis. A war, however limited, does no one any good. Meanwhile, India has to build its economy. In international relations, nothing speaks louder than economic power. As India works to restore the status quo on the boundary, it might well heed the words of the architect of modern China, Deng Xiaoping — “Hide your strength, bide your time.”

Post your comment
#India today magazine, #Line of actual control, #Belt and Road Initiative, #Indiachinafaceoff
The views and opinions expressed in this article are those of the authors and do not necessarily reflect the official policy or position of DailyO.in or the India Today Group. The writers are solely responsible for any claims arising out of the contents of this article.