How India's civil-military divide is doing more harm than good

Mythology, metaphors and sentiments masquerade for critical and coherent thinking when it comes to national security.

This was followed in a few days by a press statement by Dai Bingguo - a former state councillor and China’s special representative for the boundary talks - that made headlines like "India and China on the cusp of a final border settlement" that brought in a sense of déjà vu.

For this final border settlement, Bingguo announced that flexibility on the eastern sector was crucial and would be followed by flexibility by the Chinese on the western sector. The flexibility that Bingguo sought was handing over of Tawang, which he claimed was inalienable from China's Tibet in terms of cultural background and administrative jurisdiction.

When you look towards our eastern border and Chinese interests in Tawang, it is evident that this has very little to do with the spiritual and cultural concerns of Tibetans, which are of little significance to the Chinese.

In fact, the Chinese have done their best to undo the culture of the Tibetans, which has resulted in periodic self-immolations and uprisings by the Tibetan Monks. It is also evident that geography favours India, which explains the Chinese decision to unilaterally withdraw from this area after occupying it during 1962.

No democratically elected Indian government can gift away Tawang, an important Buddhist spiritual centre having a settled population. Equally evident is that China cannot give Aksai Chin to India or make any meaningful concessions in that sector, especially after the China-Pakistan Economic Corridor (CPEC).

So why would China ask for an area in the eastern sector, impossible to give by India as a prelude to border settlement for concessions on the western sector which has so much of strategic stake for the Chinese.

The deductions are self-explanatory; the Chinese do not want a settlement, they would rather not settle the border dispute and provoke an escalation to settle the dispute to their advantage at a time and place of their choosing.

The map (pictured below) depicts the maritime trade routes of China. It also captures the strategic challenges and the dilemma facing China.

It was in 2009 that China started showing the entire state of J&K as disputed territory. The country had refused a visa to the Army Commander of the Northern Command and started giving stapled visas to residents of J&K.

When the Modi government came to power, there was widespread expectation of large investments by China when Xi Jinping visited India. These did not materialise and a series of incidents followed, from LAC flashpoints and NSG membership denial to finally China preventing a west-sponsored resolution in the UN to designate Masood Azhar as a global terrorist.

China in the meantime also signed the CPEC agreement with Pakistan and committed $46 billion in building this road which will pass through some of the world's harshest terrain through India-claimed POK and the restive province of Balochistan. These when viewed purely through the prism of economics make little sense, but when viewed through the prism of geopolitical strategy have ominous portends for India.

A casual study of the map showing the maritime trade routes of China brings out that CPEC is a calculated Chinese attempt to break out of American control of maritime trade routes, where its export-dependent economy can easily be strangled by the superior naval power of the west.

Equally evident is that, to fully secure the CPEC, the Chinese would ideally like Ladakh to be under their control. Ladakh under Chinese control can only be achieved by the Kashmir dispute being settled in favour of Pakistan.

Kashmir for Pakistan was always about control of the headwaters of the Indus river system and has little to do with Islamic solidarity. In fact, Islamic solidarity is just a façade for fooling the masses on both sides of the LOC, and explains why the Punjab-dominated Pakistani establishment sacrificed the Pakhtoons, their fellow citizens, in the American global War on Terror.

The same Pakistani establishment in spite of American pressure continues to persist with their Kashmir agenda. These two strategic interests of our neighbours with maritime trade routes to China's revisionist agendas coinciding highlight the inevitability of war.

J&K in that sense is also strategic territory from an Indian perspective as the national granaries of Punjab and Haryana are watered by the same river system.

That modern India is a nation that suffers from a deficiency in strategic thinking is well known. 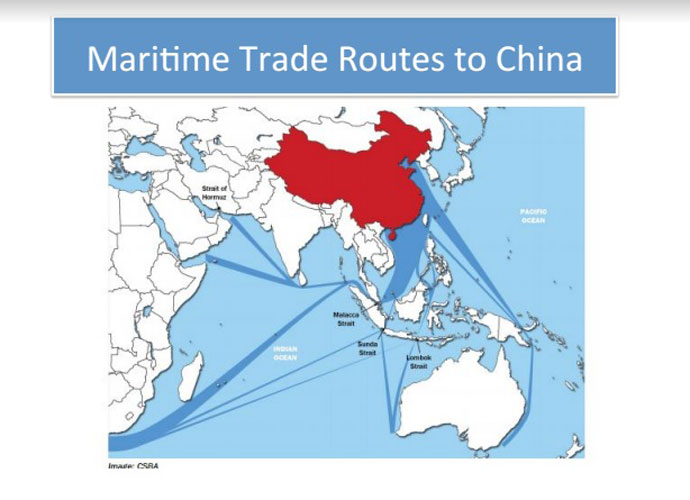 This particular phenomenon has been the subject matter of numerous studies that has documented the absence of a strategic culture among the Indian elite. Westerners have attributed this to Hindu culture and outlook on life and many Indians seem to have bought into this particular line of argument.

Mythology, metaphors and sentiments masquerade for critical and coherent thinking when it comes to national security even among the educated circles. That we do not have a well articulated national strategy when it comes to dealing with pressing matters of state like the J&K issue, the Chinese border issue etc, and this allows matters to fester.

That a nation/civilisation imbued with strategic thought process would have fought its major wars in other countries instead of mostly in the sub-continent seems to escape our national leadership. Now war might finally not happen due to a variety of reasons, but the actions of the Chinese give limited comfort.

A prudent nation would have to plan for this impending conflict. A statesman can try to prevent this by offering the Chinese overland access to the Bay of Bengal or the Arabian Sea through Nepal. This would lessen their strategic vulnerabilities and also make the CPEC less important. 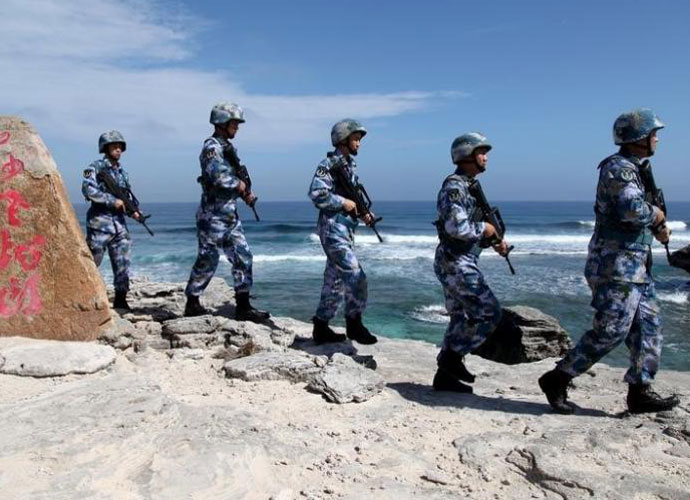 An India-China détente is the need of the hour. Photo: Reuters

Such an overland access would be more viable both from an economic and security perspective compared to the CPEC. A border dispute resolution and economic investments/concessions should be the prize dangled for such access.

A strategic thought process is a dire necessity for a major nation like India but this has not taken firm root due to a variety of reasons - the most prominent being the civil- military divide. In India, the military has been kept away from national strategic decision-making process, which has been dominated by the civil services.

This has harmed the national cause in two respects - creation of a military leadership insular in its thought process and consequently a nation deficit in a strategic planning process. The world over, national security strategic planning is the domain of the military under political leadership with the civilian bureaucracies participating and this can be discerned in the preponderance of people with a military background dominating the national security apparatus both in the west as well as in authoritarian regimes.

This institutional weakness has resulted in the Indian nation having a poor strategic culture, in spite of a world-class human resource; this has nothing to do with Hindu philosophy or worldviews. That this weakness is clearly seen/felt but is not fully understood and addressed is also evident.

Further this is the cause behind the various systemic deficiencies in our national policymaking initiatives. Policy should be a derivative of strategy and not the other way around, which is a classical error in military parlance called "situating the approach"; this is not fully grasped by our national leadership.

A nation the size of India, with its various security challenges, can never reach its full potential without addressing this systemic flaw. To highlight this simple fact, it has come out in the press multiple times that the nuclear cores are under control of civilian nuclear scientists!

This in a country where natural calamities have repeatedly seen the civil administration among the first to flee, a rational human reaction to impending doom. Imagine a nuclear catastrophe where whole societies are devastated, how does one expect civilian hierarchies to function in a cohesive manner; can the nation bank on this sort of ad-hocism in matters of national security?

The military man, especially the officer corps, which is the soul of any military, is specially selected by psychological profiling and trained by a lifetime of submitting to military discipline to prepare for such calamities.

One need only remember the tsunami in Andaman and Nicobar and the story of the air force pilots with their families missing still flying their rescue missions. The world over, the military work under a different set of laws and a code much harsher than the rest of society to achieve this conditioning.

The solution to this cannot be applied in isolation only to the military and needs to systemically address the entire civil-military-bureaucratic edifice that has come up post Independence. The nation needs people of high calibre to volunteer and serve in the armed forces - a largely thankless job in the 21st century, but the last resort of a nation.

The nation also needs armed forces that respect the Constitution. The evidence till date and the cultural and organisational ethos of the armed forces have withstood this test. The civil-military divide, wherein the bureaucracy believes that the forces have to be kept in check by bureaucratic machinations, is a self-defeating and dangerous process.

This leaves the officer cadre of the forces feeling humiliated and shackled and can have grave implications for the nation both in war and peace. A part of the answer lies in creating a leaner and more professional permanent cadre for the officer corps by ensuring a much larger intake of short service commission.

Senior military officers should be given exposure in government bureaucracies and be made a part of the strategic planning process. These measures will change the organisational culture of the military and give longer tenures to senior military leadership. This one measure will ensure that a strategic culture takes root wherein long-term solutions instead of the present quick fix and scoot policies that bedevil our national security narrative emerge.

As a fledgling democracy that saw many surrounding nations succumb to military interventions, it was but natural that the initial political leadership was wary of the military and kept the armed forces at an arm’s length in national affairs.

Indeed the national leadership at that time had very simplistic and idealistic views on foreign policy and in matters of defence of the nation.

An independent nation the size of India, with a vibrant democracy but with an untrusted military, is an anachronism the nation can well do without. Not initiating a course correction could make the nation pay a very heavy price in times to come.

Post your comment
#Armed Forces, #CPEC, #India-China Ties
The views and opinions expressed in this article are those of the authors and do not necessarily reflect the official policy or position of DailyO.in or the India Today Group. The writers are solely responsible for any claims arising out of the contents of this article.