Instances like Dadri, Una and elsewhere are not mere crimes. Blind irrationality is overpowering the scientific temper that the Constitution says ought to prevail.

Schools and universities never tell young people why the Constitution of India mandates, through Article 51, the propagation of a scientific temper.

In part this is a problem inherent in relating to extrinsic, or borrowed, terms and ideals. To most, "scientific temper" is no more than the conjunction of two respectable-but-indistinct words that sounds nice enough to be entertained at a distance. As a result, the constitutional mandate remains floating somewhere in the air and never hits the ground.

In the meantime, society goes in the opposite direction. Road rage, for example, was unheard of a quarter century ago. Superstitions, cults, caste and communal cleavages are clearly on the rise in what is presumed to be a secular, democratic republic.

The Constitution in a democratic polity can be amended - and this is strictly confidential - in three different ways: legislative, executive and ideological. There appears to be a correlation between this sequence and the order of indefensibility of the amendments aimed at. Amendments that cannot be subjected to the light of parliamentary debate in full public view are consigned to the third category.

We are mandated, for example, to be a socialist republic. For a while we feebly, gropingly endeavoured to be so. Globalisation was tantamount to a de facto amendment of the Constitution that obscured the word socialist from its Preamble. (So, there is logic to the need to decry and demonise Nehruvianism in the wake of globalisation.)

No prolonged debate, no mobilisation of parliamentary favour, no fuss of any kind was involved in this process. It was thrust upon us, via executive action, as a fait accompli. The Constitution stands de facto amended to that extent.

The turn of the defining adjective secular has now come.

Before we reckon this, here’s a little aside. The propagation of a scientific temper is envisaged, in the Constitution, to be the very foundation for the stability and survival of the socialist, secular, democratic republic. The ascendancy of reason over aggression, blind faith, frenzied mobocracy, and regressive worldviews is the bottom-line of such a polity.

The Indian State declared itself to be secular through the 42nd Amendment in 1976. It was not felt to be necessary to explicitly preamble-rise, so to speak, the secular character of the State as secularism was the anvil on which the Constitution was crafted. Should Muslims and Dalits continue to earn a livelihood as they have till now in their traditional ways?

Otherwise, Articles 25 to 30 might not have found a place in our Constitution. It is not an accident, therefore, that these provisions are now under mounting communal opprobrium. It is eminently possible that they would come under increased pressure. They may not be deleted from the Constitution; but they could be in a state of suspended animation.

Yogi Adityanath assuring a clutch of bishops that Christians will have freedom of worship in UP affords scare, not solace. It is as though fundamental constitutional provisions shall apply to certain communities depending on the dispositions of political personages and phalanxes.

May Dalits fall in love and marry those who reciprocate their love? Should Muslims and Dalits continue to earn a livelihood as they have till now in their traditional ways? Who will decide if the carcass of a cow in a truck is that of an animal which was dead or not at the time of being shifted into it? Or, if the animal transported is bought or stolen? Or, if the transportation in question is licensed or unlawful?

Once a person is lynched on the basis of mere rumour and suspicion, what difference does it make that, days later, the laboratories certify that the suspected item of offence was, after all, only buffalo meet or mutton? The frenzied crowd only commits a mistake and is, for all practical purpose, condoned. For the family and community of the murdered, it remains an unhealing wound and an undying terror.

Instances like Dadri, Una and elsewhere are not mere crimes. They are frontal challenges to the rule of law and the fundamental architecture of our Constitution. It is embarrassing in the extreme when cow vigilantes argue that they have to take the law into their hands because the State has failed in protecting cows. (Modi says the vigilantes have failed in feeding the cows. Thousands die of eating plastic bags.) Are we really a failed state?

Let us assume, for the sake of argument, that in all instances of atrocities against Dalits and minorities, the victims were guilty of the alleged offences.  Let’s also agree that a Dalit boy has no right to marry a high caste girl. That it is illegal for Dalits to deal in carcasses of any kind. That cattle should not be transported, with or without license.

What is the licit remedy for offences that pertain to them in a democracy where rule of law prevails? Can raving, ravaging, frenzied crowds be the putative custodians of law, armed with “special powers” to kill, maim and administer instant (in)justice of the antediluvian kind?

A society must evolve, and not be spanked or whacked towards prescribed tastes and modes of behaviour. Evolution, unlike revolution or mob action, is gradual. It needs to be worked at and systemically promoted. Propagation of a scientific temper is the principal strategy for it. Quite simply, there can be no rule of law at the macro level without the rule of reason at the micro-level. 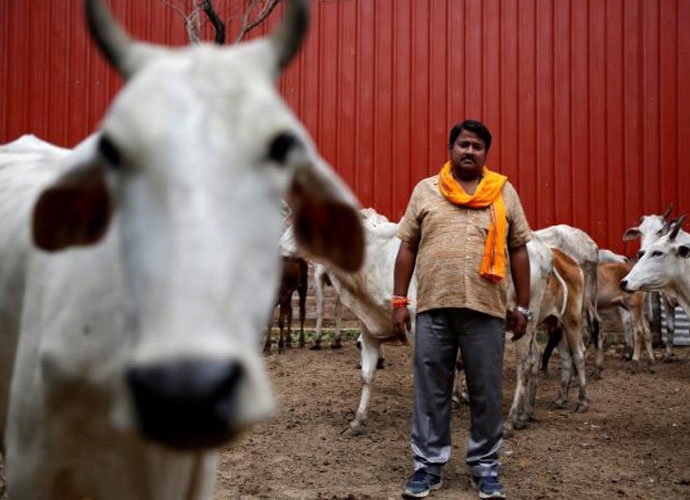 The currently sporadic outbreaks of crudity and irrationality, aggression and anarchy, need to be seen in the end as symptomatic of our failure in creating an educated society. Photo: Reuters

Europe went through severe spasms of religious wars and sectarian violence. The Thirty Years' War (1618-1648), fought between rival Christian factions, cost a million lives. In the school of pain, Europe learned that reason was mightier, radical and more far-reaching than the sword. Violence gave way to common sense; darkness, to light.

Even while in the throes of sectarian intolerance, Europe was still humane enough to produce a Voltaire in France and a Locke in England who so very passionately and comprehensively advocated the cause of tolerance. We are gravitating towards the night of organised intolerance without any comparable lights.

The issue, in the end, is not that a Dalit is attacked or insulted every eighteenth minute in this country. It is not that church service is disrupted by Adityanath’s youth brigade, under the benign watch of state police. It is not even that Muslims in particular now feel insecure as never before. These, and a hundred others, are mere symptoms. The malady is that blind irrationality is overpowering the scientific temper that the Constitution says ought to prevail.

Reforming a society, equipping its members to lead a rational and harmonious life, is a long-shot in comparison. Habits and practices inimical to good sense, sound public taste and the integrity and unity of the country will be voluntarily abjured when the light of reason and the remedial potency of scientific temper spread.

Vigilante misrule, distinguished by murderous hatred, spreading terror among defenceless people, is dishearteningly pre-modern. That it is happening  - admittedly only in pockets and is apparently frowned upon - when we are all seated, our seat belts tightened, to take off to a brave, bold new world of development and national well-being, is a mockery, the like of which even pre-modern societies were spared.

The currently sporadic outbreaks of crudity and irrationality, aggression and anarchy, need to be seen in the end as symptomatic of our failure in creating an educated society. The most worrisome thing is that even the educated, in far too many instances, lack scientific temper.

It is not merely in “access” that we have failed vis-à-vis education; it is in quality and purpose that we have let our country down.

It is a pity that the Prime Minister, whose intentions I have no reason to suspect, does not see this as a basic issue or national priority. Corruption must be, we all agree, eradicated. But how can we agree that demonetisation, without any change in culture and character, will eradicate corruption from India?

How can we not see that vigilantes are counterfeit coins in the national economy of rule of law? Do we really believe that a digital and corruption-free India will be born without spreading and popularising a scientific temper fortified with reason, common sense and a capacity to think objectively and critically?

We cannot have day and night at the same time. It will be either the rule of reason, or the tyranny of vigilantism. We have two legs. But we don’t go forward with the right and backward with the left. Can our collective destiny be different?

#Indian Constitution, #Education, #Vigilantism
The views and opinions expressed in this article are those of the authors and do not necessarily reflect the official policy or position of DailyO.in or the India Today Group. The writers are solely responsible for any claims arising out of the contents of this article.