A new roadblock for India and Nepal

India needs to find an amicable solution with Nepal for the areas where there is no agreement as it could avoid China interfering in bilateral affairs between Delhi and Kathmandu in the future.

An argument has erupted between India and Nepal, after an 80 km new road between Darchula to Lipulekh, the border pass near the trijunction with Tibet and Nepal, was inaugurated by Defence Minister Rajnath Singh. The road is expected to be used by the Indian pilgrims visiting Kailash-Mansarovar, some 90 km from the pass, as well as the local traders, Lipulekh being one of the three authorised land ports between India and China.

PTI said: "The Lipulekh pass is a far western point near Kalapani, a disputed border area between Nepal and India. Both India and Nepal claim Kalapani as an integral part of their territory." Kathmandu handed over a diplomatic note protesting against the construction of this vital road to Vinaya Mohan Kwatra, the Indian Ambassador to Nepal; who was then called by Pradeep Kumar Gyawali, Nepal's Foreign Minister.

India's Ministry of External Affairs (MEA) denied that the road was crossing Nepal's territory: "The recently inaugurated road section in Pithoragarh district in the state of Uttarakhand lies completely within the territory of India. The road follows the pre-existing route used by the pilgrims of the Kailash Mansarovar Yatra," said South Block. It is in Delhi's interests to find an amicable solution with Nepal for the areas where there is no agreement. (File Photo: Reuters)

Last November, Kathmandu protested, "unilateral decisions on border issues won't be accepted," it was in reference to the new Political Map of India published by Delhi after two new Union Territories - Jammu & Kashmir and Ladakh - came into existence on October 31. Kathmandu formally protested over the inclusion of the Kalapani area in the new map. The new Indian map is exactly the same as the one published in 1954 in the Atlas of the Northern Frontiers of India, the official reference till today for India's boundaries. Kathmandu didn't protest against the old map and apart from the new UTs, there was nothing new in the 2019 maps.

The case is complicated by the political struggle within the ruling party in Nepal and by the lack of historical consistency in Kathmandu's position.

After a War between British India and Nepal in 1814, the Nepalis were sent back across the Kali River in May 1815 and subsequently the Segowli Treaty was signed on March 4, 1816. Article 5 of the Treaty stated: "The Rajah of Nepaul renounces for himself, his heirs and successors, all claim to or connexion with the countries lying to the West of the River Kali, and engages never to have any concern with those countries or the inhabitants thereof." Unfortunately, there was no map attached, which could have authoritatively shown the exact alignment and source of the Kali River. It was only by the mid-1800s that the Himalayan border was properly surveyed by the Great Trigonometrical Survey of India (a precursor of the Survey of India). 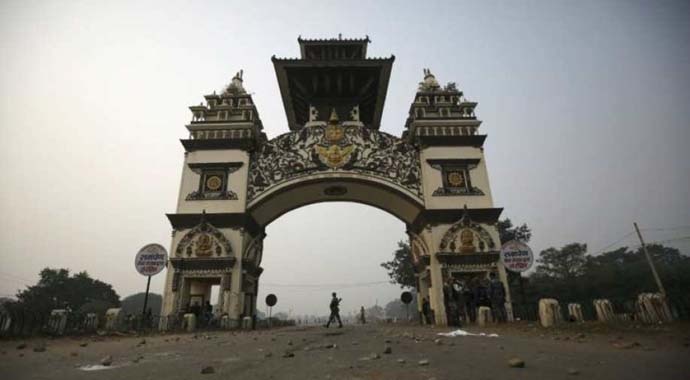 The precise maps attached to the Treaty and signed by both parties show Kathmandu seems to have forgotten that the location of the river on the maps of the Sino-Nepali treaty matches with the Indian one, which implies the road is on Indian territory.

What must be negotiated is the area south of the river, where the British (and later Indian) cartographers have taken into account, the watershed principle and the land revenues of Gunji village on the Indian side. What compounds the issue is the rift within the ruling party's leadership in Nepal and the role played by China through Hou Yanqi, Beijing's Ambassador to Kathmandu, the new 'Queen' of Nepal, who arranged a rapprochement at the top level of the ruling Nepal Communist Party.

An Op-Ed in The Indian Express noted: "Shedding its image of being a reluctant player in the internal politics of Nepal, China has been playing an active role these past few days in Kathmandu's power games."

According to onlinekhabar, on May 12, "In contrast to his foreign affairs minister's statement that the government was aware of India constructing a link road to Manasarovar encroaching on the Nepali territory in Kalapani region, Prime Minister KP Sharma Oli says he was not told about it."

There is no doubt about the location of the river and that the new road is inside Indian territory. It is in Delhi's interests to find an amicable solution with Nepal for the areas where there is no agreement; it could avoid China interfering in bilateral affairs between Delhi and Kathmandu in the future.